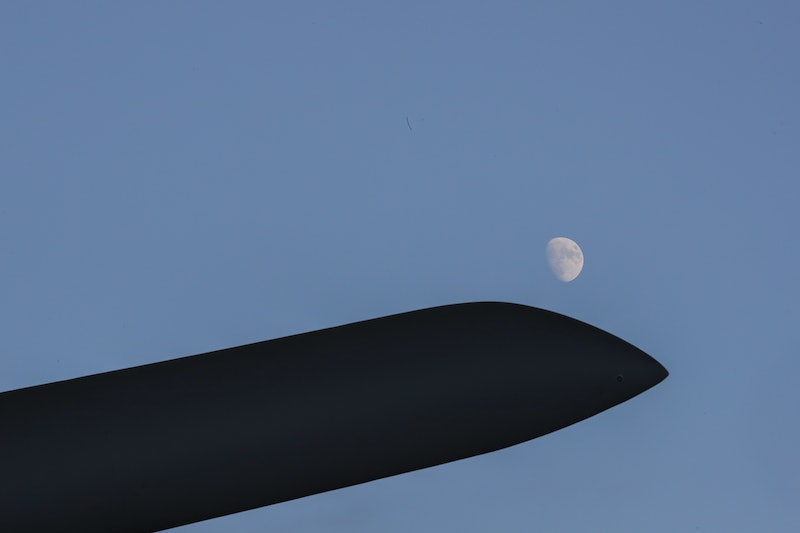 The June 13 super new moon in Gemini is littered with lucky stars, and it's going rain down feel-good energy on every sign in the zodiac that consciously harnesses its lunar magic. However, the zodiac signs that will be least affected by the June 2018 new moon might have to work a little harder to get the stardust shower that will automatically fall on other signs.

While this new moon is a supermoon, you won't be able to see it "because at new moon, the moon more or less rises and sets with the sun and is lost in the sun’s glare all day," the website Earth Sky explained. "Moreover, the dark side of a new moon faces Earth, while the lit side faces the sun." However, because this new moon in Gemini is influenced by eight powerful stars, it's going to produce a lot of positive cosmic energy if you pay attention and put in a little bit of work.

Because of the position of the new moon, Aries, Taurus, Cancer, Leo, Libra, Scorpio, Capricorn, and Aquarius might not feel the effects as much. Instead, you could feel a more subtle shift in your consciousness. This means it's important to pay attention so you can take advantage of the energy of the June 2018 super new moon, shed the baggage of the first six months of the year, and move into summer all bright and shiny like a brand-new baby.

"This phase of the moon occurs at 22 degrees and 45 minutes of Gemini, affecting people born with personal planets and points at approximately 19 to 27 degrees of the mutable signs (Gemini, Virgo, Sagittarius, and Pisces) most significantly," Cafe Astrology explained on its website.

While Aries, Taurus, Cancer, Leo, Libra, Scorpio, Capricorn, and Aquarius will still experience karmic gifts from the eight fixed stars influencing the Gemini new moon, these eight signs are going to have to pay close attention to take advantage of opportunities related to career, passion projects, and relationships because those opportunities might not be as obvious as you think.

"Work with this new moon by writing out, reciting, recording, and listening back to your affirmations," Astrologer Chani Nicholas advised on their blog. The June 2018 new moon offers a cosmic reset for everyone.

According to Cafe Astrology, everyone should be open to seizing new opportunities on June 13 from 3:20 to 4:10 p.m. in your time zone. Additionally, Crystal B. Astrology noted on their website that this small window of time is called the Cazimi moon, and it brings good luck and new possibilities.

"A Cazimi moon (which can only happen at the time of a new moon) is good to use if you want something to really succeed. It’s one of the highest forms of good luck." While it's a good idea for everyone, Aries, Taurus, Cancer, Leo, Libra, Scorpio, Capricorn, and Aquarius in particular should consider setting a reminder on their phones to offer up intentions during this time.

What do you want to bring into your life during the second half of 2018? What do you want to release? Be clear about what you're hoping to manifest. Write it down, say it out loud, and actively hold it in your mind between 3:20 and 4:10 p.m. on June 13. Make sure to see how the new moon will affect your sign before putting your intentions out to the universe. If you're in a meeting or just plain forget to set your intentions during this time period, don't worry because you'll get another chance.

"If you miss this moment, the next best time for commencing won’t roll around until after Thursday at 9:45 p.m. as the moon’s influence is weakened due to its proximity to the sun (combustion)," Gary Paul Glynn wrote on the blog Astroblogick. "After that, it’s time to take a step in whatever direction we feel compelled to set out on with a sense of confidence and right-thinking, moving us closer to our goals and lofty aspirations." Translation: Go forth and slay like a boss.