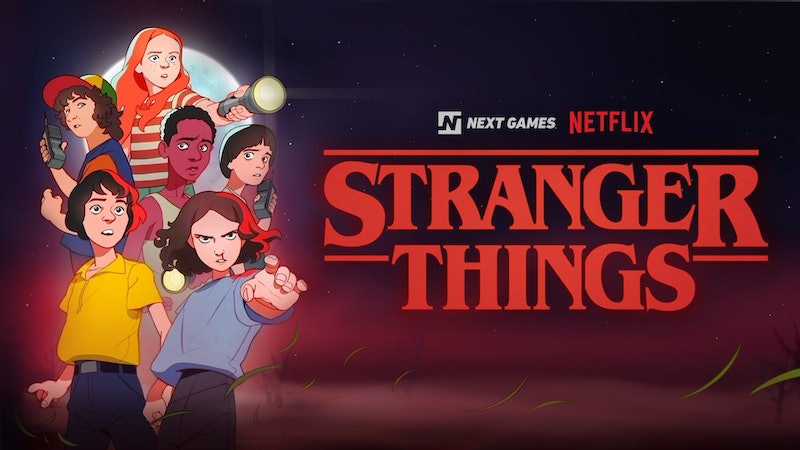 Big news for Stranger Things fans: A new Stranger Things mobile game is in development from Finnish studio Next Games — and it looks like it’s going to please the Pokemon Go enthusiasts in the crowd, too. According to both a press release posted on Next Games’ website and an E3 panel that occurred on Wednesday, the new mobile game will utilize “location-based technology” to bring the world of the Upside Down to life, whether or not you actually live in Indiana. The new mobile game is due out in 2020, so we’ll be waiting for it for a while — but even so, excitement about the offering is running high, especially since Stranger Things’ third season is set to drop in less than a month.

“We are excited to be partnering with Next Games out of Helsinki, Finland, who have crafted this RPG/puzzle hybrid game that has location-based technology,” said Netflix’s director of interactive games, Chris Lee, at E3 (via IGN), “meaning that no matter where you are at in the world, you can fight and battle against the Upside Down, even in your own backyard.” Added Next Games CEO Teemu Huuhtanen in the press release, “We are huge fans of Stranger Things and thrilled to work together with Netflix to bring our shared vision of Stranger Things into life in a mobile game format.”

Stranger Things has been a full-blown phenomenon ever since its first season arrived on Netflix in 2016 — and it’s only grown in popularity since then. In addition to a second season, which dropped in 2017, and an upcoming third seasons set to debut on July 4, 2019, it’s also spawned such wide and varied tie-ins as novels, tabletop games (including an Eggo waffle-themed card game and a Stranger Things edition of Dungeons and Dragons), and LEGO sets — not to mention all the pop culture parodies (hi there, Stephen Colbert) and fan riffs and memes (Hopper Dancing To, anyone?) that have come to life in the meantime.

The upcoming game from Next Games, however, looks to be a completely different beast. Details are pretty scarce right now — the game is still in development, after all — but according to Huuhtanen, the “core focus” of their efforts will be “to deliver on Stranger Things’ rich and intense themes like friendship and supernatural adventure, and translate these into snack-sized entertainment on your mobile device.”

What else do we know beyond that? Not much, but here are a few things to know about Next Games' Stranger Things app:

According to the press release, Next Games’ take on Stranger Things will be a “location-based puzzle RPG” which will allow players to “explore the Upside Down hidden around them in their daily travels and work with fellow fans to fight back its emerging evils.” It’s not yet known whether the game will include any augmented reality elements — but odds are good that it will, because…

Knowing this, the next thing we know about the game is also unsurprising:

3. It’s Being Compared To Pokemon Go

Outlet after outlet has referred to the upcoming app as Pokemon Go-esque, which I suppose is fair; although Pokemon Go certainly wasn’t the first geo-specific mobile game to hit various app stores, it certainly brought the convention to the fore. For what it’s worth, The Walking Dead: Our World also drew similar comparisons, even though the goal wasn’t to catch anything, but merely to, y’know, stay alive. Whether we’ll be fighting things or catching them — or doing something entirely different (the emphasis, after all, has so far been placed on the puzzle-solving aspect of the game, rather than on combat) — in the new Stranger Things games remains to be seen.

4. It’s Completely Different From The Other Stranger Things Mobile Game

One previous Stranger Things mobile game has already been released: Stranger Things: The Game, which arrived back in 2017. The new Stranger Things mobile game, however, couldn’t be more different from this other offering. For one thing, it’s being developed by a different studio; the previous game was developed by BonusXP, not Next Games. More importantly, though, Stranger Things: The Game was styled after retro, top-down adventure video games (think The Legend Of Zelda franchise in its earliest incarnations), making it a completely different experience than the Google Maps-powered, “location-based puzzle RPG” of Next Games’ app.

5. Also, Don’t Confuse It With Stranger Things 3: The Game

No word yet on whether there will be in-game purchases available as well for players who want to give themselves a bit of a leg up, but the core gameplay will be free for all users, according to the press release.

7. It Will Have A “Saturday Morning Cartoon Aesthetic”

Or at least, that’s what the press release says. Chris Lee also noted during the E3 panel that Next Games had “developed this amazing ‘80s, retro, Saturday morning cartoon art style” that Netflix has “absolutely fallen in love with.” It’s not clear exactly what any of that means yet, including whether or not said aesthetic will echo the currently-available press images; it’s an interesting idea all the same, though. The two other Stranger Things games developed by BonusXP utilize a different, yet still period-appropriate aesthetic, so at least we’re sticking with a theme here.

For the curious, Saturday morning cartoons as a weekend institution kicked up in the 1960s; Hanna-Barbera pioneered the block of programming, initially seeing great success simply by rerunning previously-aired episodes of shows like The Jetsons and The Flintstones, but by 1966, all three of the major television networks — ABC, CBS, and NBC — had Saturday morning cartoon blocks built into their schedules. During the early-mid ‘80s, when Stranger Things canonically takes place, popular Saturday morning cartoons included The Smurfs, Super Friends, He-Man, She-Ra, and Jem And The Holograms, among a wide range of others.

8. It Will Be Available For Both Android And Apple Devices

That’s to be expected — it’s just good business to develop apps that can be played by users of both platforms — but it’s nice to know all the same.

9. It’s Still A Long Ways Away

Alas, Next Games’ Stranger Things mobile game won’t be arriving until 2020. At least we have a whole new season of the show to tide us over in the meantime, though, right?

Season 3 of Stranger Things drops on Netflix on July 4, 2019. See you in the Upside Down!