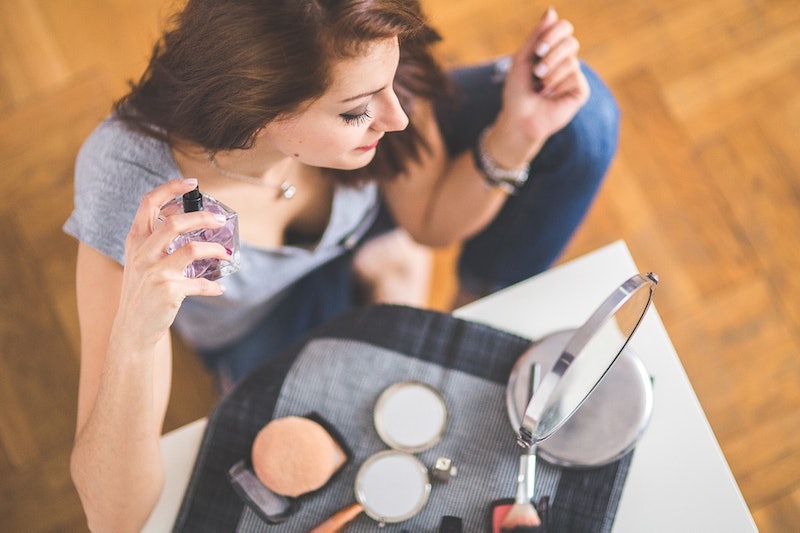 Like most people, I have way too many perfume bottles lining the top of my dresser. I spritz different fragrances on all the time and revel in my scent wardrobe — without really thinking about how much work goes into creating a new perfume. Sure, I have a vague knowledge of top notes and base notes. But as far as the process of perfumery goes, it's admittedly hard to imagine how, exactly, companies go about creating all the scents we love.

So, to find out more, Bustle spoke with experts like Ann Gottlieb, who is the scent aficionado behind fragrance companies like Axe, to figure out how our beloved fragrances come to be. "I have been working on the brand since its turnaround quite a number of years ago," Gottlieb says. "I am the intermediary between the brand people at Axe and the fragrance houses, and I translate whatever the image is for a particular new fragrance into a fragrance."

And that's the start of the process — someone turning an image into a fragrance. It seems perfumery not only involves the science of combining scents, but also a touch of art and cultural awareness. If that piques your interest, read on for some more facts about how fragrance brands create their scents.

1. It's An Extremely Intuitive Process

Perfume companies don't just pay attention to the scent of their product, but also the entire feeling around it. "A lot of it is intuitive," says Gottlieb. "A lot of it is factoring in what is going on in the marketplace in fine fragrance. What is going on in the Axe portfolio. What is working for it." All of these factors are kept in mind throughout the creative process.

2. The Region Is Taken Into Consideration

Did you know a perfume that sells well in America won't necessarily do well in Europe? Turns out, the US isn't very adventurous when it comes to what we like, so companies tend to lean towards old standbys. "The states is a much less experimental market than other places. And so we tend to need a bit of safety in every fragrance," Gottlieb says. Our new fragrances will often pull notes from older fragrances that people love and can easily recognize.

3. There's A Lot Of Experimenting Going On

When it comes to creating a new scent, there's a lot of experimentation goin' on. "I [look to] fragrances that I've worn over the past twenty years and [study] the notes used to create those," says Sarah McDaniel Vanover, founder of hush beauty labs. "I do love creating and experimenting. Right now I'm playing with florals as a departure from my usual woody and spicy references."

4. And An Incredible Knowledge Of Notes

Scents have top notes (the ones you smell right after spraying), middle notes, and base notes (the ones that linger on your skin for hours). And in order to create a good perfume, knowledge about how these notes will interact is key. "If you don't know how each individual note plays with the others, you'll get soup instead of scent," Steve Johnson, scent sommelier for Scentbird, tells Bustle. "Every aroma in a perfume has an actual weight. Light citrus atoms physically weigh less than notes like oak moss or patchouli, cinnamon, or vanilla. So you have to create a perfume that will take advantage of each note's evaporation rate based on its weight for it to be successful and fun."

5. It's Often A Team Effort

When Gottlieb is in the process of creating a scent, she works with a team of people from the perfume company to figure out what works. "I do a lot of the work and bring it to them and they analyze and study everything, they tell me which they like, what they don’t like, [and then we] decide how it should be rectified," she says.

6. Dozens Of Modifications Are Made

That scent you love likely didn't come to be on the first try, or even the 40th. A recent Axe fragrance called YOU, for example, went through 43 different modifications. "We will start, probably, working on about a dozen different fragrances and as the process continues we eliminate them and eliminate them until we have the fragrance that we like the best," Gottlieb says. "And then that is refined further."

From start to finish, a new fragrance often takes anywhere from four to six months. "And it will freak you out to know how many versions [of each scent there are]," Gottlieb says. "I would say, that between the fragrance houses and me, the work that I see, [there are probably] a thousand. It’s a very in-depth process."

8. Music Is Played For Inspiration

Remember what I said about creating an image? To get inspiration for what this scent will "look" and feel like, perfumers often work in a creative atmosphere. "Our scents are created by choosing a mood or feeling," says D. Dandie, director of operations at Skindew All Natural Luxury Skincare. "Music plays a big part, so [we're always putting] the playlist on shuffle and 'finding the feeling'."

Smaller independent perfumers often create new scents all on their own, and some put out quite a few new scents a year. But large designer companies usually go for two. "Especially if the new scent is what they call a 'flanker' — or a scent sequel to another famous perfume," says Johnson.

So interesting, don't you think? Who knew so much goes into creating the scents we love.