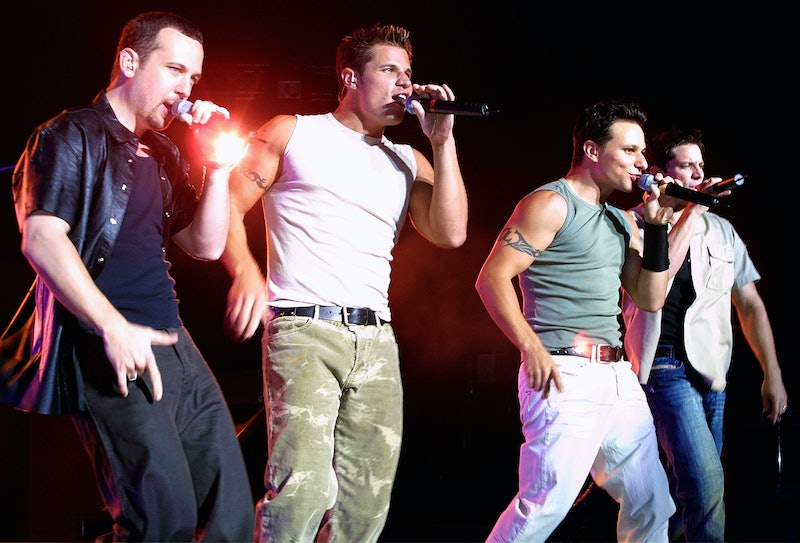 On July 29, 1997, pop music’s greatest tribute to the average human body temperature put out their first album, and like mercury in a thermometer on a hot day, the sentimentality is rising. Two decades after 98 Degrees released their self-titled debut record, Entertainment Tonight asked Nick Lachey, Drew Lachey, Jeff Timmons, and Justin Jeffre to reflect on the boy band’s early days. After waxing nostalgic about calling into radio stations to request their own songs (if that sweet anecdote was dripping with any more charm, it’d be a Pandora bracelet), the guys of 98 Degrees offered nuggets of wisdom to their younger selves. The “Because of You” singers advised 98 Degrees of yesteryear to savor the experience, to have more fun, and to take a deep breath. Oh, and and one member also suggested avoiding a certain hairdo that was quite en vogue.

After he and his bandmates told their younger selves to not take things so seriously and to “smell the roses,” Nick tacked on a recommendation that will make fans screech like the “I Do (Cherish You)” music video’s twist ending:

"I would have told myself 20 years ago, 'Change your hairstyle. Don't go with the butt cut.'"

Oh, the butt cut. You gorgeous, quintessentially ‘90s hairstyle. A work of coiffure art fit for Nick Lachey, Nick Carter, Zachery Ty Bryan, Jonathan Taylor Thomas, Sam, actor Sean O'Neal's character from Clarissa Explains It All, and so on. There are few things as breathtaking as a bowl cut that’s been parted down the middle to look like the bowed wings of a seagull. Or, you know, a butt.

Could you imagine the music video for “Invisible Man” without that iconic 'do? Oof. What a bone-chilling thought.

Thankfully, Nick has not figured out a way to go back in time and alter this hairdo.