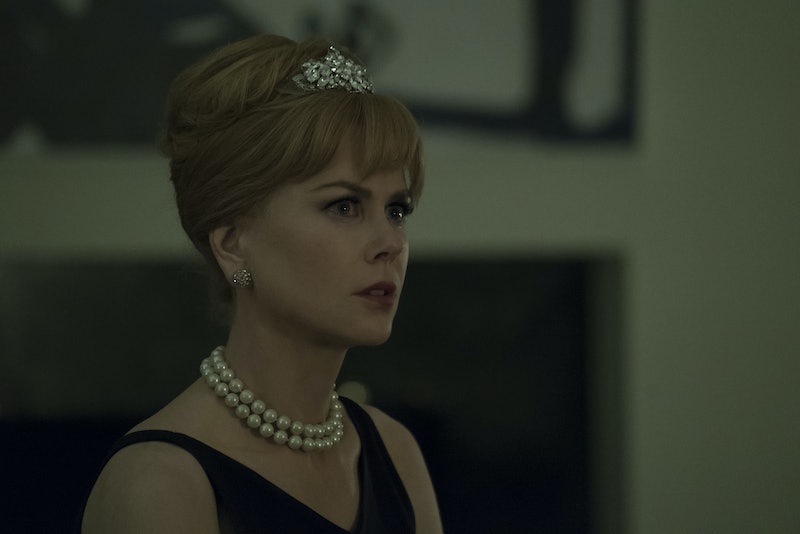 Season 2 of HBO's Big Little Lies has been shrouded in secrecy, but a new promo dropped Sunday night that should tide hungry fans over just a little bit longer. The new teaser for Big Little Lies Season 2 was incredibly brief, but that's OK. It gave us a little bit to stew on until a release date is finally revealed.

Aired during the 2019 Golden Globes, the Big Little Lies clip was part of a montage of other projects HBO has coming down the pike this year. It showed the series' stars — Reese Witherspoon, Shailene Woodley, Nicole Kidman, Zoë Kravitz, and Laura Dern — standing in the outfits they wore during the finale's fateful party. Everyone who watched the first season of the drama, which is based on a book of the same name, knows things turned deadly that night. But it's unclear exactly how the second season will pick up.

Though there's been no official word from HBO as to when the series will return with its originally unplanned second season, Kidman gave CNN a vague timeline when she appeared on the network for New Year's Eve. "June, I think. We're looking at June," Kidman said when asked when the premiere was coming, according to The Wrap. "We're still in the midst of editing it, but, um, thanks for asking 'cause we're glad that people are excited about it."

Other cast members have dropped hints about what Season 2 might have in store, though everyone has been extremely tight-lipped on what the plot will actually entail. Kravitz said during an appearance on Watch What Happens Live that she hadn't seen the footage yet, "but the scripts are awesome. Very, very juicy."

The legendary Meryl Streep will also be making her mark on Season 2, playing the mother-in-law of Kidman's character, Celeste. Kidman told Variety that Streep sent an email to Kidman and Witherspoon after they won the Golden Globe for Season 1. "She goes, 'I suppose now I have to join you.' And we were like, 'What?' The two of us were just shocked," Kidman said, noting that Streep signed on without reading a script. "She hadn't even read it," Kidman says. "That’s how much she wanted to support us."

Regardless of what's coming in the future, Big Little Lies has already solidified a place for itself as an important part of today's TV climate. It's a show centered around complex women, some of whom are facing extraordinarily difficult circumstances. Kidman's arc was perhaps the hardest to watch, as her character, Celeste, dealt with an abusive husband throughout Season 1. "We started our production well before #MeToo," Kidman told the Guardian. "And then it was percolating a bit when Big Little Lies first came out. That is why for that role of Celeste, there was a bigger response than anything I had done before."

Witherspoon has shared photos on her Instagram page that were taken while she and the cast shot Season 2, and it's clear she's proud of the resulting product. Fans are no doubt itching to see just how quickly new episodes will roll out on HBO, but for now, we'll just have to reflect on the sinister beach town drama that got us here.