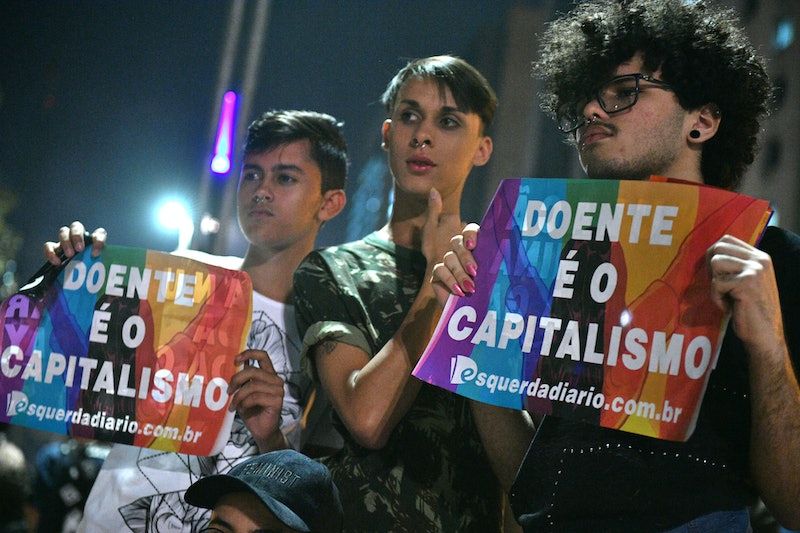 Gay conversion therapy, which is sometimes referred to as ex-gay therapy or sexual orientation change efforts (SOCE), is a widely discredited form of “curing” same-sex attraction that’s enabled homophobic clinicians, unlicensed therapists, or religious leaders to subject gay people to ineffectual, harmful, and dangerous 'treatments' since the 1950s. People who are exposed to gay conversion therapy are eight times as likely to have attempted suicide, almost six times as likely to use illegal drugs, and more than three times as likely to be at high risk for HIV and other sexually transmitted diseases, according to The Human Rights Campaign. For these reasons and more, over a dozen official health organizations in the U.S. have condemned gay conversion therapy, but the practice has only been made illegal in a handful of places. In other places across the world, the situation isn't much better. Recently, a Brazilian judge approved gay conversion therapy after it had been banned for nearly 20 years, and LGBTQ folks and allies all over the world are outraged at this massive step backward.

One week after a Brazilian bank cancelled an exhibition of gay art in response to protests from local right wing and evangelical Christian groups, Waldemar de Carvalho, a federal judge in the capital of Brasília, overruled a 1999 decision by the Federal Council of Psychology that prohibited psychologists from offering programs or treatments to “cure” gay people. Judge de Carvalho’s decision addressed an action brought by Rozangela Justino, an evangelical Christian and psychologist who lost her license after she offered conversion therapy to a patient back in 2016. Five years prior, Justino reportedly told a local newspaper that she viewed being gay as a “disease,” and regularly advised her patients to seek religious guidance on the issue. “I feel directed by God to help people who are homosexual,” Justino said. This news is upsetting for the LGBTQ community everywhere, but especially in Brazil, for so many reasons. In addition to making a bigoted and anti-scientific choice, Judge de Carvalho has made what could become an extremely dangerous decision for Brazilians who identify as LGBTQ.

Back in the 1950s, gay conversion therapy was hyper-focused on “curing” same-sex attraction in men with violent and psychologically abusive therapies that were guaranteed not to work, because being gay isn't a disease that any "therapy" can "cure." And although this is horribly upsetting, what’s perhaps even more troubling is the fact that these “treatments” haven’t changed all that much over the years, even as we see more progressive LGBTQ legislation across the globe. One video that came out in 2015 detailed how modern conversion therapy centers operate, and it's as upsetting as you might imagine. In the U.S., only eight states have outlawed gay conversion therapy for minors — even though same-sex marriage is federally legal here, and psychological abuse is a common component of American gay conversion programs.

Still, as difficult as all of this is, it’s inspiring to see how people are standing with the LGBTQ community and against gay conversion therapy. Brazilian Twitter is taking a stand by tweeting things like, "There's no cure for what is not a disease," with the hashtag #curagay ("gay cure" in Portuguese). Equally comforting are the words of David Miranda, a leftist councillor in Rio de Janeiro and one of the country’s few openly gay politicians:

"This decision is a big regression to the progressive conquests that the LBGT community had in recent decades,” Miranda told the Guardian. “Like various countries in the world, Brazil is suffering a conservative wave.”

This is heartbreaking for all of us, but thanks to the internet, there are so many ways we can send love and support to Brazil. Whether you choose to sign this petition, raise awareness on Twitter with #curagay, or do both, you can take a stand for the liberty of the LGBTQ community in Brazil no matter where you are.