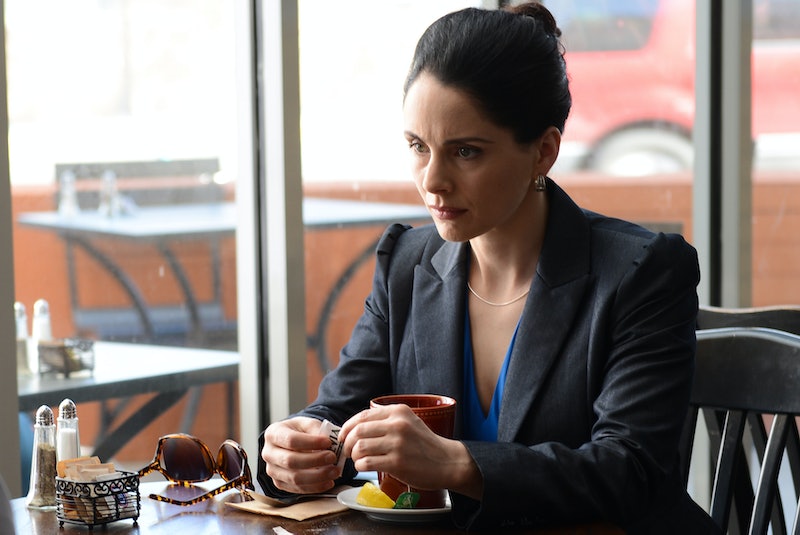 Ursula Coyote/AMC
By Caitlin Gallagher
May 16, 2017

Although it took until the final season of Breaking Bad for Lydia Rodarte-Quayle to show up, it doesn't take quite as long for Gus' business associate to arrive on Better Call Saul. Spoilers for the May 15 episode follow. During the Season 3 episode, "Off Brand," Lydia appears on Better Call Saul and the prequel series reveals she is the one who is responsible for finding the laundromat that will host Gus' Superlab. Of all the Breaking Bad characters that people have wanted to show up on Better Call Saul, Lydia certainly isn't the most beloved, but that doesn't make her appearance any less exciting. So how long will Lydia be on Better Call Saul? Based on her involvement later in Breaking Bad, she could be a small part for the long haul.

In Breaking Bad, Gus used the industrial laundromat Lavandería Brillante as a front for his meth lab. While Gus was a respectable businessman that the DEA never suspected of drug dealing (expect for Hank), that all changed when Walt convinced Hector Salamanca to blow himself and Gus up with a bomb. The DEA then realized that Gus was the criminal mastermind that Hank had claimed him to be and they started investigating his business ties. The existence of Lydia and her involvement in the drug business hadn't been known to viewers of the show until Gus died, but once Gus Fring was dead, Lydia panicked and ordered all of Gus' employees to be killed since she was worried that her connection to the Chicken Man would be discovered.

Better Call Saul isn't showing the origin story of how Gus and Lydia became business partners (after all, it's a Saul spinoff, not a Gus one), but her appearance is allowing fans of Vince Gilligan's world to see Gus and Lydia interact — something that was never shown on Breaking Bad. In "Off Brand," Lydia is by Gus' side when he first lays eyes on the laundromat where Walt and Jesse will make meth. And actually, it's Lydia who thinks to show Gus the abandoned laundromat that will become the Superlab in the first place.

Her first scene in Better Call Saul is absurdly brief with her only speaking three words ("Well?" and "OK then"), but this tiny showing is a tease of things to come. Gus himself just recently appeared on the series, so Lydia showing up shortly after the Los Pollos Hermanos owner proves how important she is to building his drug empire. And while Walt and Jesse hadn't known of her until Season 5 of Breaking Bad, when Lydia was in the second episode of that season, "Madrigal," Mike already had an established antagonistic relationship with the uptight and business-minded woman.

As Better Call Saul will eventually show how Mike becomes Gus' full-time employee and righthand man, Mike and Lydia will also need to meet. Mike told Jesse in Season 5, Episode 4 of Breaking Bad that, "You don't know this woman like I do," which means there is plenty for Better Call Saul to work with when it comes to Lydia and Mike's relationship. And considering how much Mike seems to despise Lydia in Season 5 of Breaking Bad, she's bound to do some pretty heinous things in Better Call Saul now that she is introduced to the series.