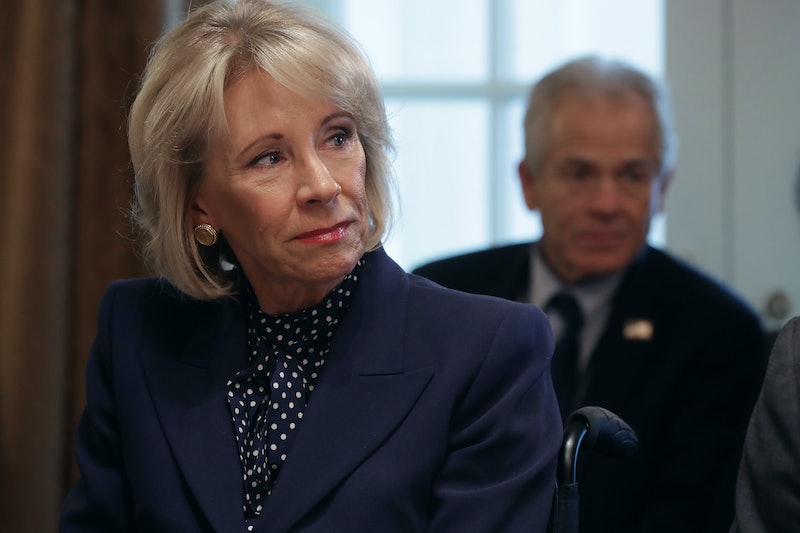 The FBI charged numerous wealthy parents earlier this month for allegedly participating in a bribery and cheating scheme to get their children into elite universities, and now the Department of Education is reportedly getting involved. Betsy DeVos will investigate the college admissions scandal after calling the nationwide scam “disgraceful,” Politico reports.

“The allegations made and evidence cited by the Department of Justice raise questions about whether your institution is fully meeting its obligations,” the letter to the university presidents read, according to Politico. The investigation reportedly will center on whether the universities ran afoul of any laws pertaining to federal financial aid programs or “any other applicable laws.”

DeVos promised to open an investigation the day after news of the scheme broke, according to The Washington Post. Bustle has reached out to the Department of Education for confirmation of the investigation.

“Every student deserves to be considered on their individual merits when applying to college, and it’s disgraceful to see anyone breaking the law to give their children an advantage over others,” DeVos said in mid-March, according to The Post. “The department is looking closely at this issue and working to determine if any of our regulations have been violated.”

The FBI charged 50 people, including several celebrities, for allegedly participating in the cheating and bribery scandal. Wealthy parents had been bribing coaches and standardized testing administrators, among others, to gain their children spots at top schools, according to the FBI. So far, no students have been charged in connection with the scheme, and the authorities said many were completely unaware that their parents had pulled those strings on their behalf. However, Yale rescinded an admissions offer from one student — the first student to suffer consequences from the scandal.

If DeVos' investigation finds that the universities in question did in fact violate any federal regulations, the proposed penalties wouldn't affect the students whose wealthy parents bought their way into college, but rather students at the other end of the economic spectrum.

As Politico reports, the most extreme potential penalties would entail rescinding the universities' ability to receive Pell grants and federal student loans, which go to students who "display exceptional financial need," according to the Federal Student Aid's website. If that happens, prospective low-income students could essentially be barred from universities that couldn't offer those sources of funding.

Of course, it may not come to that. After all, the FBI's charges didn't involve anyone in the universities' financial offices. However, the “preliminary investigation” that the department has opened will look at a wide range of material from each school, according to Politico, so only time will tell.