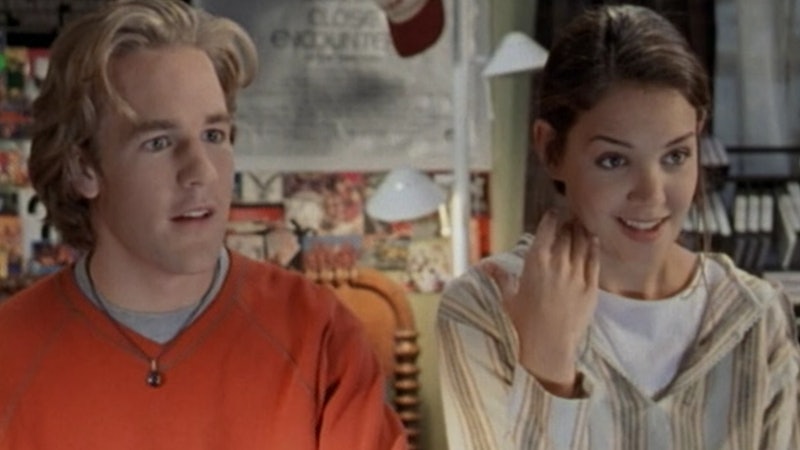 From Beverly Hills, 90210 to Gossip Girl, it seems like everyone's favorite teen dramas are getting rebooted for a new, older audience — but there's one iconic location that fans shouldn't expect to return to any time soon. During the Television Critics Assn. summer press tour, Dawson's Creek's creator shut down rumors of a reboot, explaining that new episodes just wouldn't work.

On Thursday, August 1, Kevin Williamson was speaking about his upcoming series, Tell Me A Story, when he was asked about the possibility of bringing back Dawson (James Van Der Beek), Joey and Pacey for a new series. "We keep talking about it, but no," the creator told reporters. "As of now there’s nothing in the pipeline."

While Williamson did admit that he had attempted to think of a way to bring Dawson's Creek back in 2019, he ultimately decided that there was no more story left to tell. "We kind of ended it," he said. "Jen (Michelle Williams) died. What are we going to do? We talked about it, but until we can find a real reason to do it — but no. As of now, no. It’s funny you bring that up because I was just talking about it last night."

While Williamson thinks that Jen's heartbreaking end would keep the show from ever coming back, Williams herself isn't opposed to reprising her breakthrough role, albiet in a roundabout way. "If there’s ever talk of a reunion show or something, I’m like… it would be so funny to be a ghost and like show up in people’s dreams," the Oscar nominee told Entertainment Weekly in March 2018.

However, Williams might be the only member of the show's core cast to be interested in a Dawson's Creek reunion or revival. In December 2016, Katie Holmes, who played tomboy Joey Potter on the show, admitted on the Just Jenny podcast that she doesn't think a modern version of Dawson's Creek would work. "I don't think we're going to do a reunion ... I think that the charm of the show was Kevin Williamson's writing and it was of that time and it gave teenagers this voice," Holmes said, though she did admit that she "loved every minute" of working on Dawson's Creek.

A few weeks later, Joshua Jackson shot down a Dawson's Creek revival during an appearance on The Ellen DeGeneres Show, because the cast has changed too much since the show ended in 2003. "I think for anybody who was a fan of Dawson's, to actually see us on camera again might be a little bit shocking and kind of heartbreaking," Jackson, who played heartthrob Pacey Whitter, explained. "We're not cute kids anymore! It's been a long time. We're holding up OK, but I think if you put the four of us now up to the four us then, it might be a little shocking."

Even if the cast were on board for more Dawson's Creek, fans might not be thrilled with what Williamson has planned for the crew, two decades later. In honor of the show's 20th anniversary in March 2018, Williamson told Entertainment Weekly that he thinks Joey and Pacey got divorced, despite ending up together in the series finale. "I think they got a divorce. I think that when we meet them they’re in a very dark place," Williamson said, adding that there is "still something between them that forces them to come together and raise their children."

Based on fans' heartbroken reaction to Joey and Pacey's divorce, it seems like it might be better for everyone who loves Dawson's Creek to skip a revival and simply let the show live on in everyone's memories. However, if Williams ever wants to make her idea of a show about Jen's adventures as a ghost a reality, fans will likely be thrilled to see one of their favorite teen drama characters once more.

More like this
This 'Gossip Girl' Wardrobe Error Has Gone Viral On TikTok
By Alyssa Lapid
Ashton Kutcher Wants Danny Masterson “To Be Found Innocent” In Rape Retrial
By Jake Viswanath
The Banned 'Friends' Ad Shows Monica As You’ve Never Seen Her Before
By Sam Ramsden
All The ’70s Easter Eggs You Missed In 'That ’90s Show'
By Grace Wehniainen
Get Even More From Bustle — Sign Up For The Newsletter
From hair trends to relationship advice, our daily newsletter has everything you need to sound like a person who’s on TikTok, even if you aren’t.