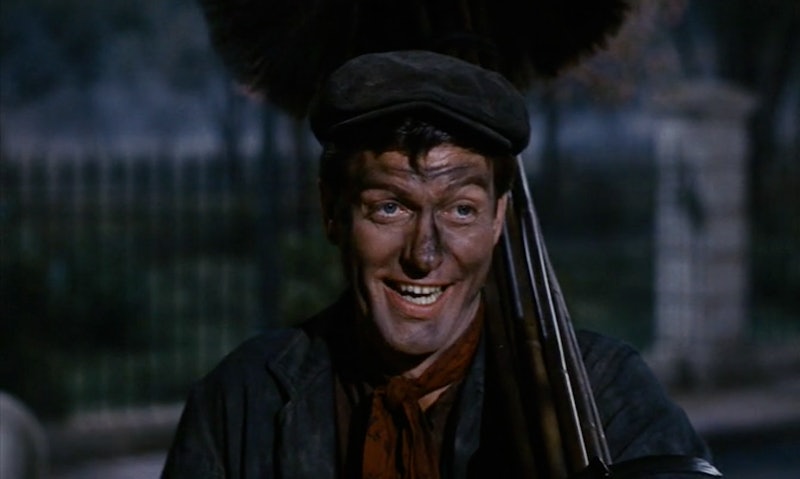 In this reboot-heavy world, it can be difficult to get excited about new versions of old favorites. Truthfully, that was the sort of feels I was having about Disney's sequel to Mary Poppins, which stars Emily Blunt as the umbrella-toting nanny, until very recently. Entertainment Tonight confirmed Dec. 20 that Dick Van Dyke will have a cameo in Mary Poppins Returns and that might make the movie as great as the original.

Van Dyke famously played two characters in the original Mary Poppins — one as the singing and dancing jack-of-all-trades (chimney sweeping, one man band-ing, and sidewalk chalk artistry) Bert, and the other as the mean and nasty bank manager Mr. Dawes. Van Dyke, with his pretty terrible cockney accent (and his dancing penguins) stole the show. The 90-year-old actor is presumably just as aware of this show-stealing as the rest of us as he told ET he had to a "be a part of it [the sequel]." Yes, Mr. Van Dyke, you do need to be involved. It's up to your cameo to save the show! A Mary Poppins without Dick Van Dyke feels just as wrong as a Mary Poppins without Mary Poppins. In related new, I'm also hopeful for a Julie Andrews cameo which has been rumored but not confirmed.

The sequel, which is based on additional Mary Poppins writings of P.L Travers, will follow a grown-up Jane and Michael Banks as they deal with life in Depression-era London. Their family, including Michael's three children, are dealing with a horrible loss when a certain nanny swoops into town with a spoonful of sugar in hand (sugar as of yet not confirmed). The star studded cast includes Lin Manuel-Miranda as Jack the Lamplighter, Meryl Streep as Topsy, and Emily Mortimer as Jane. It's going to be a romp.

But the best news for me continues to be the appearance of good ole Dick Van Dyke. In the first movie Van Dyke played the banker Mr. Dawes, but now he'll be playing the role of Mr. Dawes' elderly son — who we can assume is equally as grumpy. Van Dyke joked to ET, "This time there's no four hours in the makeup chair, I grew into the part!"

As long as Dick van Dyke has a song and dance number, I think we can all agree Mary Poppins Returns can keep up with the original. Luckily, though he's in his 90s, the comedian is still known to shake his groove thang.

Mary Poppins Returns won't make it to theaters until Dec. 25, 2018, so we've got some time to imagine the magic of whatever his performance brings. No matter what, whatever Van Dyke touches will be supercalifragilisticexpialidocious!