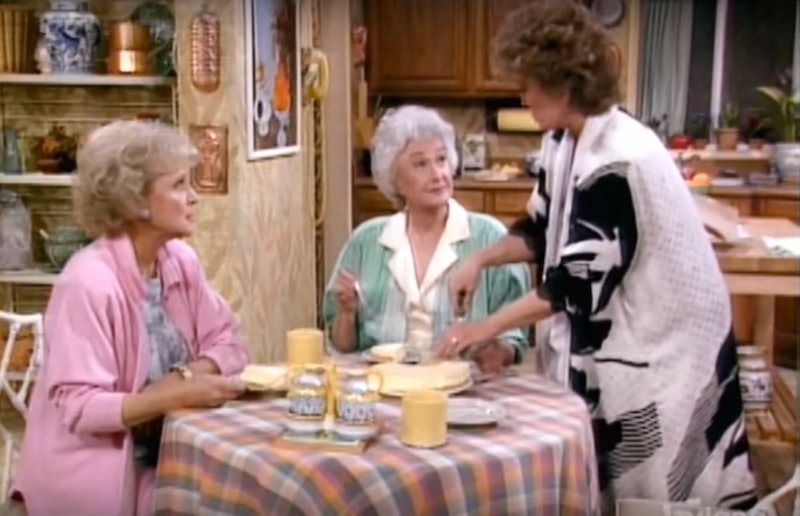 If you've ever watched the classic '80s sitcom, The Golden Girls, you'll know that there are certain variables that make up the equation of its enduring success: A snarky comment from Sophia, a meandering St. Olaf story from Rose, Blanche's latest bedroom escapades, Dorothy's know-it-all tendencies and, of course, cheesecake. It's around the kitchen table doling out slices of this decadent treat that we get some of the best scenes in the series, from the serious to the seriously funny. There was no heartbreak, no illness, no personal conundrum that these four Miami women could not solve over a dessert. And now you can recreate some of that sweet magic in your own home with the upcoming Golden Girls cookbook, due out in 2020 from Kingswell, an imprint of Disney Publishing.

Details are scarce right now, but we do know that the book will feature recipes inspired by the series, so I'm hoping there will be at least a handful of Sophia's greatest Italian dishes — including that delectable sauce often seen bubbling away on the stove and her legendary 16-hour lasagna al forno. As for Rose's horrible-smelling "Sperheoven Krispies" (that need to be eaten with your nose plugged up but apparently taste like cheesecake, fresh strawberries and chocolate ice cream) and her ancient recipe for "Gerneten-flüken Cake"? Only time will tell whether those make it into the final book. But if they do, I hope they, uh, smell better than they do in the TV show.

But obviously no Golden Girls culinary ode would be complete without a cheesecake recipe, and thanks to Babble we know one that will definitely be in it: Double Fudge Chocolate Cheesecake. And all I can say to that is, someone get the chocolate sprinkles and hot fudge sauce from the pantry, because we've got cake to eat and life issues to discuss.

The Golden Girls ran from 1985 to 1992 and has been on the air virtually ever since, thanks to constant re-runs on networks like TV Land and Logo. It's the rare TV-watcher who hasn't spent an entire evening marathon-watching the antics of these four best friends through all of their break-ups, fights, mid-life crises and more romantic relationships than I can count on two hands. More than anything, though, the series has been celebrated in the same vein as programs like Sex & the City and Girls for its important message: Female friendship is really the greatest love of all. If you're looking for a book that celebrates all the magic of Golden Girls, stay tuned for this cookbook and maybe pick up a copy of a behind-the-scenes oral history of the show, Golden Girls Forever: An Unauthorized Look Behind the Lanai by Jim Colucci, which came out in 2016.

So, get ready to throw a party and invite everyone you know...but save the biggest slice of cheesecake for your best friend. You might have to wait until 2020 to dish up your Golden Girls finest, but something tells me it will be more than worth it.