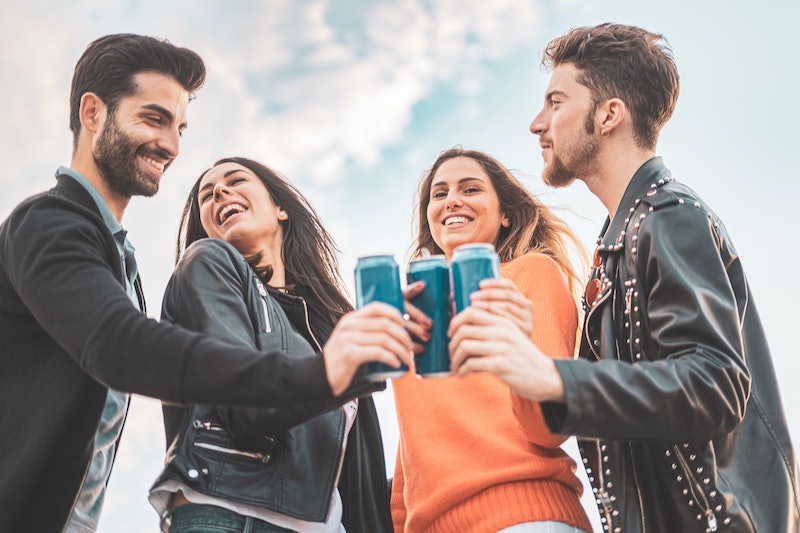 If you set aside your rosé this summer in favor of White Claw or other fizzy beverages of the same ilk, I have excellent news for you: The very first hard seltzer festival ever is set to occur in Denver, Colo. soon. Bearing the delightful title of “Fizz Fight,” the festival will take over the EXDO Event Center on Sept. 14, 2019, offering tastings, art exhibits, food trucks, and more. Whether you’re a seasoned seltzer taster or someone who’s just dipping a toe in the fizzy, fruit-flavored water, Fizz Fight presents a unique opportunity to test out tons of drinks emerging in the spiked seltzer space — many of which you might not otherwise know about.

Although hard seltzer has existed for several years now, the market for it has grown rapidly over the past year or so: According to Nielsen data for March 2018 to March 2019, sales of hard seltzer exceeded $585 million, reported beverage and alcohol industry online magazine SevenFifty earlier this year. Dollar sales grew a whopping 185%, while unit sales grew 196%. That’s… substantial. But you don’t even really need numbers to confirm how popular boozy seltzer has become; it’s virtually everywhere you turn these days, from your social media feed to grocery and liquor store shelves.

As such, it’s only to be expected that festivals celebrating the fizzy beverage would start to pop up, just as they’ve done for other food fads in recent memory. (Hi there, Frye Festival. And Pinknic. And Festival of Mac and Cheese. And...) At Fizz Fight, more than 20 brewers from across the country will be on site offering a total of more than 60 different seltzers to try, with unlimited samples available, according to Insider. Other events occurring during the festival include a tasting competition, which includes a People’s Seltzer Award for which those who attend will be able to cast their own votes; interactive installations created by local artists; and lots of food trucks (although it’s also recommended that you eat a substantial meal before arriving, because, y’know, booze).

Although the festival will only run for one day, there will be two sessions — one from 12 p.m. to 3 p.m., and one from 4:30 p.m. to 7:30 p.m. — each of which will be three hours long. VIP ticket holders will also get an extra half hour for tasting, thanks to early entry perks granted by the pricier ticket (for the first session, the VIP doors will open 11:30 a.m., while for the second, it’s 4 p.m.).

Not in Denver? Not a problem: According to Insider, there are plans in the works to bring Fizz Fight to a variety of other locations in the future, including Austin, Atlanta, Miami, LA, San Diego, New Orleans, and Tucson. No other information is available about these possible future events yet, but keep your ear to the ground — especially after Sept. 14. If the inaugural festival is a hit, then it’s all the more likely that more Fizz Fights could pop up in other places later on down the line.

I’ll be perfectly honest: When it comes to regular, non-boozy seltzer, I… cannot really distinguish between brands. I like sparkling water, but regardless of brand, it all tastes pretty much the same to me. As such, I’m sort of having a hard time understanding what the appeal of 60 different seltzers might be — even if they’re spiked, rather than non-alcoholic — when my taste buds will probably assume I’m just drinking the same thing over and over and over again.

Then again, maybe I’m just the seltzer equivalent of people who think all beer or all wine tastes the same; particularly when it comes to craft hard seltzer, as opposed to the stuff mass-produced by large brands and labels, there are no doubt nuances that my unsophisticated seltzer palate just hasn’t learned to pick up yet.

I do also appreciate that Fizz Fight will be highlighting independent brands and labels that might not have the notoriety or marketing budget of, say, White Claw, but which still deserve attention. Among the competitors for the tasting competition, for example, is Press; founded in 2015, it’s now both the largest independent hard seltzer brand, as well as the only woman-owned hard seltzer brand on the market, according to Brewhound. Press’ seltzer is around 4% ABV and comes in unusual flavors like Grapefruit Cardamom and Pear Chamomile.

A rep for the festival also confirmed to Delish that a number of craft beer breweries who have also branched out into hard seltzer will also be in attendance, including Oskar Blues Brewery and Upslope Brewing. Said the rep, “There are innovative flavors coming out every week that consumers would never hear about if it wasn’t for a crazy, one-day party.”

And besides, as Diana Hubbell noted over at beer-focused site October, Fizz Fight organizer Jake Browne’s hope for the event is “to build one big boozy party that introduces audiences to something new without taking itself too seriously.” I may not be able to distinguish between seltzer brands now, but that’s OK. I can learn — and events like Fizz Fight want to make that happen.

Tickets for Denver’s Fizz Fight are on sale now at Eventbrite now. There are early bird admission discounts if you buy before Sept. 1; currently, regular tickets cost around $30 a pop, while VIP ones run about $50. After Sept. 1, the prices will rise to $40 for a regular ticket and $60 for a VIP one. The event itself will occur on Sept. 14 at the EXDO Event Center on 35th St. Find out more at the Fizz Fight website.