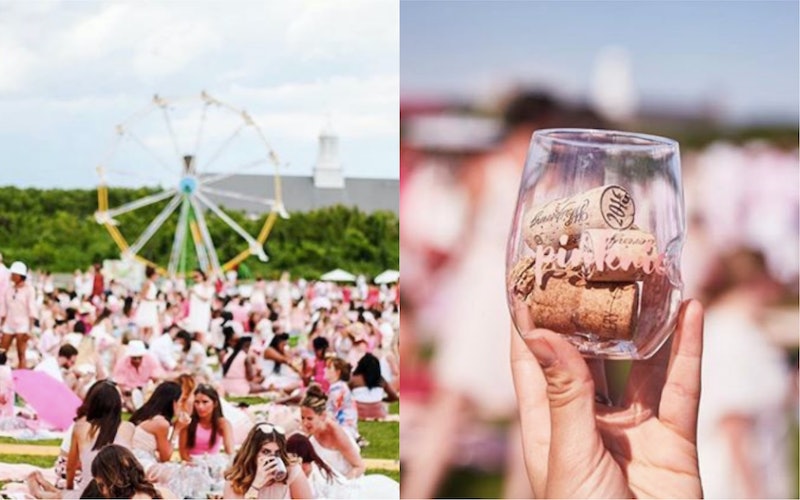 Attention, rosé lovers and millennial pink enthusiasts: A summer event is coming to New York this year that’s built just for you. Called the “Pinknic,” it’s a rosé-themed picnic and outdoor musical festival that celebrates thinking pink — whatever that means to you. It’s scheduled to hit Governor’s Island on Saturday, June 30 and Sunday, July 1 in 2018, and trust me: If festivals are your scene, you’re not going to want to miss this one.

This isn’t the first time the Pinknic has taken over Governor’s Island during the warmer months; the inaugural event was in 2016, while a second one followed in 2017. But according to Business Insider, it was created more to celebrate the “rosé all day” lifestyle than as a serious wine-tasting event: Said Pierrick Bouquet, who teamed up with Derek van Bakergem to bring the whole thing to life, “We wanted to create a picnic-type of festival that would be great to enjoy rosé at, and we wanted to add a music component to it, so we created a music festival on this. It's a nice, lovely background and entertainment for the guests.” So, basically, it’s more like a mini-Coachella plus rosé than, say, la Cité du Vin plus music.

But what exactly does that mean? Well, according to the Pinknic website, it involves “[welcoming] thousands of guests, all dressed in pink and white, to take a seat on our rosé-colored picnic blankets to rosé all day with friends.” The event features food, musical performances, and of course rosé, all set against the backdrop of Governor’s Island — which, if you’ve never been, is one of my favorite places in the entirety of New York. Located off the southern tip of Manhattan and to the west of Red Hook in Brooklyn, it’s an entire island of green space full of art installations, historical sites, areas to relax, and some of the most stunning views you’ll find in the city. It’s car-free, too, so whether you’re walking around or biking (you can also rent bikes there if you don’t own one yourself!), you don’t have to worry about irate drivers swerving in front of you and yelling at you through their windows.

The 2017 festival certainly looks like it was an Instagrammer’s paradise, according to a splashy video currently viewable on the Pinknic website:

(I do have one question, Pinknic team: What’s with the Kenny G-inspired soundtrack here?)

But apparently, the event organizers have even bigger plans this year: “For 2018, we will be pulling out all the stops!” the website notes. It continues, “We’re expanding our food court to bring you gourmet food from NYC’s finest establishments, introducing delightful cocktails, and bringing you the latest and greatest in music acts. We’ll be bringing back our stunning pool, with beautiful mermaids, and spectacular fireworks at sunset to close out the festival with a bang!”

We’re still waiting to see what “pulling out all the stops” means in this context; although we do know that drinks served will include Château d’Esclans rosé, rosé champagne, and frosé and pink cocktails, and that artists like Great Good Fine OK and Autograf will be performing, many other details — such as the food vendors — haven’t been announced yet. Luckily, though, we can turn to reviews of previous events for an idea of what we can expect.

According to lifestyle and travel blog Stilettos and Statutes, the 2017 event featured “frozen rosé popsicles for sale, chilled bottles of rosé on ice available all around the grounds, a Ferris wheel with views of lower Manhattan, rosé pong, a pool full of inflatable flamingos, acrobats and mermaids, great music, plenty of great photo walls and photo ops (they were clearly catering to the insta-addicts); the site described it simply as “perfection.” Blogger Narz was also generally complimentary, praising the décor and the luxury of the VIP lounge; however, she also noted that she wished the pricey VIP tickets had a few more bells and whistles to justify the cost (like, for example, including the first bottle of rosé in the ticket price).

Both the 2016 and 2017 events had picnic baskets available for purchase; it’s not yet clear whether that will be the case for the 2018, but if it is, Narz’s review gives us a hint about what we might be able to expect them to be filled with: She and a friend ordered a “pre-fixed basket for two which included pulled pork, truffle quinoa, macaroons, strawberries, and tons of non-alcoholic drinks.” Meanwhile, in 2016, Business Insider reported that one of the baskets, which started at $65 for two people, “came with an entrée and two appetizers, as well as snacks and drinks.”

Of course, it’s likely that if there are food baskets available, they’ll also have gone up in price a bit since 2016. The cost of tickets certainly has: When the event debuted in 2016, general admission tickets were $65, according to the Village Voice, but for the 2018 festival, general admission presale for both Saturday and Sunday was $75 per day and advance sale for Saturday was $95. Currently, the only Saturday general admission tickets available are $115 regular price; Sunday is still at the advance sale stage, though, so you can nab tickets for that day for $95 right now.

General admission gets you one-day access to the event from 12 p.m. to 9:30 p.m., open lawn seating, one Pinknic blanket, wine glass and tote bag per guest, one Pinknic ice bag to make sure your rosé stays cold all day per bottle purchased, and access to all of the musical performances. Also on site will be full bar service, a gourmet food court, and a rosé-themed Ferris wheel, although note that these last three features all cost extra; bring your cards if you plan to take advantage of them, because the event is cash-free.

If you’re willing to shell out more, you can spring for Garden VIP Lounge or Pool VIP Lounge tickets. Garden VIPs get everything that comes with the general admission ticket, plus an expedited VIP line to get into the event, priority boarding on the ferry over to the island, VIP Garden seating (which includes a “preferred view” of the stage, plus partial shade, hammocks, and pillows), access to VIP tents with more bars, food, and beverage vendor, access to VIP restrooms, and complimentary access to the Ferris wheel; meanwhile, Pool VIPs get all of the above, plus access to the VIP pool lounge — which means that if you bring your bathing suit, you can also take a dip in the pool while you’re busy doing everything else. These perks will cost you, though: Garden VIP tickets are $215 regular sale, while Pool VIP tickets are $300 advance sale and $325 regular sale.

Whatever you spring for though, make sure you obey the dress code: According to the Pinknic FAQ, it is, in fact, mandatory, so if you don’t have any pink or white in your wardrobe and you’re looking to get your Pinknic on this year, you might want to get on that. Here are some options for you, if you happen to be like me and own a wardrobe that is almost exclusively black. (“Summer chic” is a little hard to pull off when your inner soul never quite outgrew its ‘90s goth phase.)

Tickets are on sale now; they’re going fast, though, so act soon if you want to get your rosé on at this year’s Pinknic. Yes way, rosé, indeed!

More like this
I Tried The $20 TikTok Viral Oishii Strawberries — Here's What I Thought
By Sophie Hanson
Lotus Biscoff Does A Biscuit-Chocolate Hybrid Now
By El Hunt
Dunkin’s Pumpkin Spice Latte Is Officially Back This Week
By Mia Mercado
Trust Me, Pickle Martinis Are The New It Drink Of The Season
By Emma Carey
Get Even More From Bustle — Sign Up For The Newsletter