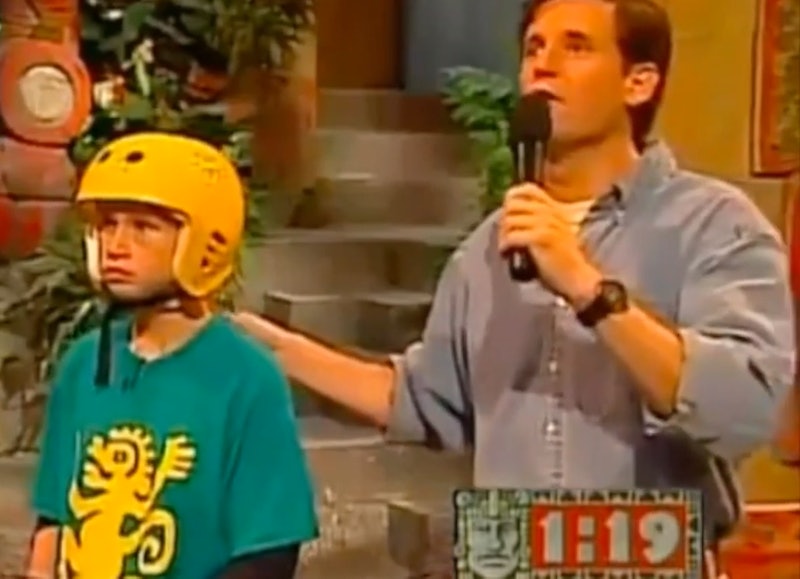 If you thought you had missed your chance at assembling the Shrine of the Silver Monkey, then think again. On Monday, Dec. 16, the mobile streaming service Quibi announced a Legends of the Hidden Temple revival is coming — with a twist. The Nickelodeon game show classic is being rebooted for adults. And you know what that means: you might be able to complete the Temple Run you've been dreaming of since you were a kid after all.

While the upcoming reboot is set to be "supersized" and filmed in a real jungle instead of on a Nickelodeon sound stage, many of the show's most famous elements will remain intact, per E! Online. Portions of the game that will be the same include: Temple Run, the Moat Crossing and everyone's favorite talking rock, Olmec. The revival appears to be balancing nostalgia with new elements that will draw in millennials who grew up watching the original. And that includes making the prizes bigger and better — although, the producers might want to consider keeping in a trip to Space Camp as an option, because that's still the dream.

"Bringing back Legends for Quibi is a dream come true," Scott A. Stone, executive producer, said in a statement. "I have been so lucky to be part of this defining millennial show, and now there is a defining millennial platform to go with it. I couldn't be more excited."

Stone is a co-creator of the original, so his involvement is promising. Meanwhile, Nickelodeon will serve as an executive producer. There's no word yet on whether the classic show's host, Kirk Fogg, will return for the reboot, but he did appear in Nick's 2016 live-action movie expansion of the franchise.

The Legends of the Hidden Temple reboot joins a long list of shows ordered by Quibi, which is set to launch April 6, 2020. The mobile only streaming service is targeting a millennial audience, and as a result, it's serving up plenty of nostalgic content. Other programs include reimagined versions of Punk'd and Singled Out, a modern take on the 1999 film Varsity Blues, and an adventure series starring Zac Efron.

So far, Quibi hasn't shared information on how to apply to be a contestant on the show, but since this reboot is aimed at the adults who grew up watching Fogg and Olmec banter, super fans should stay alert. It looks like you might just have a chance at living out your Legends of the Hidden Temple fantasy yet.

More like this
'Friends' Star Maggie Wheeler Offers Support To Matthew Perry After Reading His Memoir
By Alyssa Lapid
Mel B Thinks These Celebs Should Play Them In A Spice Girls Movie
By Alyssa Lapid
Man Meets Politics: ‘Boy Meets World’ Star Ben Savage Is Running For Congress
By Jake Viswanath
The 'Scream 6' Trailer Shows Off Hayden Panettiere's Return & Ghostface In NYC
By Jack Irvin and Jake Viswanath
Get Even More From Bustle — Sign Up For The Newsletter
From hair trends to relationship advice, our daily newsletter has everything you need to sound like a person who’s on TikTok, even if you aren’t.