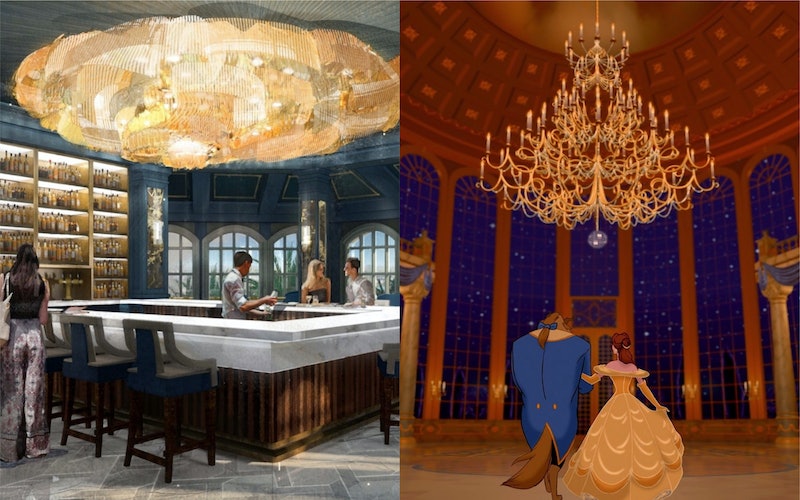 Excellent news for anyone whose favorite tale happens to be as old as time: A new Beauty And The Beast bar at Disney World will be opening in the fall of 2019 — and the best part is, you won’t have to buy a park ticket to check it out. It’s not going to be located inside one of the Orlando, Fla. resort’s many theme parks, you see; rather, it will be based out of one of Walt Disney World’s resort hotels: The Beauty And The Beast bar is coming to the Grand Floridian. We don’t have a name for the spot yet, but according to the official Disney Parks Blog, it will feature “four unique spaces inspired by Belle and the Beast,” ranging from Belle’s spectacular library inside the Beast’s castle to the movie’s iconic ballroom. I don’t know about you, but curling up in Belle’s library with a nice glass of wine sounds like an ideal evening to me.

Rumors that a Beauty And The Beast-inspired lounge would be taking up residence at the Grand Floridian first began making the rounds at the beginning of April, when the hotel’s upscale Mizner’s Lounge seemingly unexpectedly closed its doors. Now, Disney has confirmed the rumors, stating that the “re-imagined lounge” will take up residence in the spaces formerly occupied by Mizner’s Lounge and Commander Porter’s, a nearby menswear shop.

Here's a look at the concept art:

According to the Disney Parks Blog, the four areas of the expansive lounge will each take their cues from a different locale seen in Beauty And The Beast: The main bar will be a unique take on the ballroom, with a “magnificent fold chandelier” inspired by “Belle’s flowing ball gown” and “subtle nods to the Beast’s magical rose,” rather than a faithful recreation of the room itself; the “formal library” will feature “classical baroque designs and French furnishings inspired by Belle, with hints of the Beast’s friends;” the garden room will be themed after the enchanted forest in which the Beast’s castle lies nestled; and the outdoor patio will “evoke the romance of the Beast’s garden terrace.”

Notably, the new bar will be themed after the 2017 live-action version of the Disney classic, rather than the original 1991 animated hit: Per the Disney Parks Blog, the “enchanting lounge will celebrate the magic and romance of the popular Disney live-action movie.” The move might be perplexing to some, but I would argue that it actually makes a certain amount of sense; after all, Disney World already has one extremely popular dining spot themed after the animated Beauty And The Beast: Be Our Guest, which opened in the Magic Kingdom in 2012.

The ballroom dining room of Be Our Guest at the Magic Kingdom.

The experience at the new bar sounds like it will be quite different from the experience at Be Our Guest, too. Whereas Be Our Guest is primarily a restaurant with three dining areas meant to bring the ballroom, the west wing of the castle, and the castle gallery to life, the Grand Floridian’s lounge will focus more on drinks (although bar bites will likely be available as well), with the four spaces suggesting, rather than recreating, the story’s setting. Also, the whole “order on a tablet, have your food brought to you thanks to a Magic Rose” thing for which Be Our Guest is known doesn’t look like it’s going to be part of the deal at the Grand Floridian’s lounge.

Oh, also, you can stop by and explore any of the Disney resort hotels, even if you're not staying there or actually going to the parks — which means you'll be able to visit the new bar once it opens whenever you like. As WDW Prep School notes, some areas might be off-limits to you if you do so — the pools, for example, are typically limited to guests staying at the hotels themselves — but you can shop, take part in many of the activities, listen to any live music going on, and, yes, eat and drink at the bars and restaurants whether or not you're a guest at the hotel specifically or a ticketed Disney Parks visitor. Life pro tip.

Although the Grand Floridian isn’t Disney World’s oldest resort hotel — the Contemporary Resort, Polynesian Village Resort, and Fort Wilderness Resort & Campgrounds resorts share that honor, all three having opened alongside the Magic Kingdom in 1971 — it has been around for a lot longer than many others: Originally opened in 1988, it was the fourth accommodation to begin welcoming guests in Disney World history. Designed in the Victorian style meant to bring to mind “Palm Beach’s golden era,” it’s one of the more expensive — if not the most expensive — resort hotels on Walt Disney World property; rooms start at $597 per night and can go as high as $1,059 per night. It’s also historically been more “grown-up” than many Disney hotels, with the fine dining restaurant Victoria & Albert’s — which is apparently the only restaurant in the entire state of Florida to receive both the AAA Five Diamond and Forbes Travel Guide Five-Star awards — only permitting children ages 10 and up inside.

Likely due to its age — or, if you prefer, its venerability — the Grand Floridian has undergone quite a few refurbishments over the past decade or so. According to WDWInfo’s two-part history of the resort, all of the guest rooms, restaurants, retail shops, and common areas have been updated since 2007, while the spa — now known as Senses — underwent a major, 18-month renovation beginning in 2011. What’s more, the pool was re-themed after Alice In Wonderland in 2012; a Mary Poppins-themed fountain in the Villas section was added in 2013; and a new location of the Bibbidi Bobbidi Boutique, which is known for its child-focused character makeovers, will be opening at the Grand Floridian during the summer of 2019.

One of Disney's many Bibbidi Bobbidi Boutiques; this one, featuring the signature Rapunzel makeover, is on one of the cruise ships.

Although some of the updates have been criticized as inconsistent, theming-wise — the mishmash of Victorian-era Palm Beach, Victorian-era England as portrayed by Alice In Wonderland, and Edwardian-era England as seen in Mary Poppins doesn’t work for everyone — keeping things updated and refreshed is, ironically, often what keeps something from feeling dated. As such, the Grand Floridian’s changes over time will likely see the resort well through the future — and the Beauty And The Beast bar is a big part of that.

The new spot is set to open this fall. Stay tuned for more!

More like this
The 'Hocus Pocus' Sequel Finally Has A Release Date & It Makes Total Sense
By Shannon Barbour and Radhika Menon
Alicia Silverstone Has Recreated An Iconic 'Clueless' Scene
By Frances Stewart
Yes, You Can Really Charter Below Deck Med’s New Superyacht, Home
By Brad Witter
This TikTok Hard Seltzer Hack Involves A Milk Frother
By Alexis Morillo
Get Even More From Bustle — Sign Up For The Newsletter