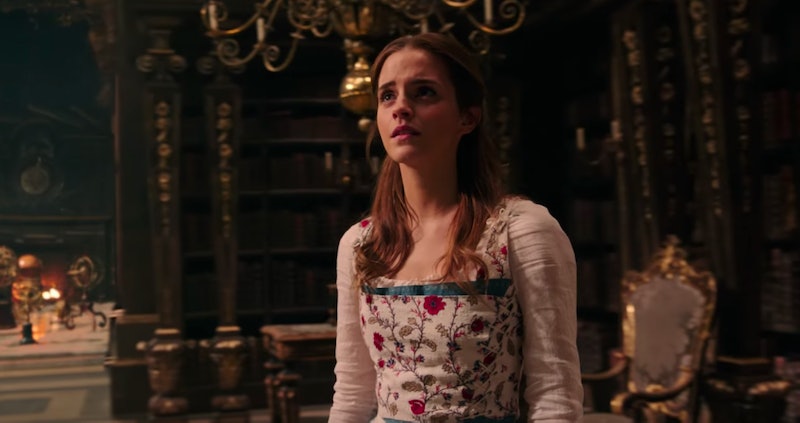 Every single child born in the '90s knows Beauty and the Beast. It's practically ingrained in our brains. The classic Disney animated film came out in 1991, and it's been delighting us ever since. So, when Disney announced they would be making a live action Beauty and the Beast, naturally people were a little skeptical. Would the live action remake stay true to the original, or take too many liberties? Would it even be a musical? Well, I've seen both versions, and I can tell you that while there are some major differences between the new Beauty and the Beast and the original, the live action version stays pretty close to the spirit of the original. These differences might change the story, but they keep the heart of the film the same.

Fans will be happy to hear that the live action Beauty and the Beast actually borrows quite a bit from the original animated film. Many scenes contain dialogue from the original — including my personal favorite, "Father, do you think I'm odd?" — and minor lyric changes aside, most of the beloved songs remain more or less the same. And, yes, the yellow dress is just as amazing as it was all those years ago. But that's not to say that the film doesn't take some creative liberties. After all, what's the purpose of a live action interpretation of Beauty and the Beast if it's just going to be a shot-for-shot recreation of the original? Take a look at these major changes to see what I mean.

The live action Beauty and the Beast goes into much more detail about the night the Prince was cursed by the Enchantress. In the animated film, it's shown through a stained glass window, but in the live action film, we get to see the Prince turn the Enchantress away in the middle of one of his lavish parties. Furthermore, the curse is a bit different this time around. For one thing, he's not a child when the curse is placed on him, so there's no word on how old he will be when the curse becomes permanent (in the animated version, it's on his 21st birthday). But, more importantly, it's also made clear that the Enchantress' curse also affected the entire surrounding area, erasing everyone's memories of the castle, the Prince, and, as the case may be, the loved ones who worked there.

Changes to the curse leads us to changes in the magical house servants. Don't worry, Lumière and Cogsworth are still the stars of the show on this front, but there are a few prominent additions. Cadenza, a harpsichord played by Stanley Tucci, is a new character created for the live action version. His presence helps give more life to the character of Garderobe (known as Wardrobe in the animated version), as the two are a married couple, torn apart by the curse that keeps him downstairs, and her locked away in a tower.

Changes in the curse also allowed for the additions of a Mr. Potts and a Mrs. Cogsworth, both of whom — spoiler alert — are reunited with their loved ones when the curse is broken.

In the live action Beauty and the Beast, Belle isn't ostracized in her town because se reads, but because she insists on teaching other girls to read too. This time around, Belle isn't content with shutting out the rest of the village, she wants to change the village, specifically how they think about women. Instead of doing the laundry by hand like the others, she invents a contraption to do it for her, giving her the time to teach a little girl how to read. It's one of the reasons the townspeople dislike her.

Belle is basically wearing pants in the new film — pants! Her wardrobe is beautiful throughout the film, with many nods to the outfit she wears in the original, but it's also functional.

In the animated film, Gaston plans an elaborate surprise wedding in the hopes that Belle will marry him. He even forcefully enters her home to draw her out to the ceremony when her father isn't there. This new version attempts to make Gaston slightly less threatening, at least to Belle's immediate safety. Instead of hatching a scheme to marry her, he asks her out on a date. It's much more civilized, until, of course, he plots against her father and tries to kill the Beast. (Don't worry, guys, Gaston still uses "antlers in all of his decorating.")

Belle and the Beast have a completely different relationship in the live action version than in the animated one. In this new version, Belle and the Beast bond over their love of literature — he's actually read all the books in his massive library.

7. Belle's Mother — "How Does A Moment Last Forever (Music Box)"

The loss of Belle's mother looms over the new Beauty and the Beast. It comes up a few times, first with Maurice's new song, "How Does A Moment Last Forever," and again later when the Prince uses a magic Atlas left by the Enchantress (another new addition to the narrative) to take Belle back to where she was born in Paris. Through that magic trip, Belle discovers what her father never told her: that her mother died of the plague, and her last wish was for Maurice to take Belle far away to keep her form succumbing to the same fate.

8. Belle Chooses To Stay — "How Does A Moment Last Forever (Montmartre)"

The addition of a new song, "How does A Moment Last Forever (Montmartre)," after Belle and the Beast start bonding makes clear that Belle sees staying with the Beast as a way to gain independence, to make her own choices and adventures without running back home to her father.

The Beast is also given a greater background story in the new film, courtesy of the new song, "Days in the Sun." The song details how the Beast's mother died when he was a young boy, leaving him to be raised in the image of his selfish, unfeeling father.

Not to be left out, the Beast gets his own new song too! In "Evermore," the Beast declares his undying love for Belle as he watches her ride off to save her father from Gaston's evil plans.

Chip doesn't escape the castle with Belle or use Maurice's intentions to help free them from the townspeople while Gaston storms the castle. But, he does play a role in the castle's final stand against the invading villagers.

The role of the Enchantress gets kicked up a notch in the new film, which brings her into Belle's life as the town's old maid, Agathe. Agathe lives her life as a beggar, silently watching how others treat her, and helping those in need. At the end of the film, Belle actually doesn't actually break the curse, but Agathe, seeing that she loves him, decides to break it herself even after the last petal from the rose has fallen.

There's been a lot of commotion over the decision to make LeFou gay in the live action film, but the reality is that his character hasn't changed that much. He fawns over Gaston just as he did in the animated film. The only difference is — spoiler alert — he ends the film dancing with a man at the castle, and is being called Disney's first major gay character.

Bonus: Diverse extras. France is a lot less white in the live action Beauty and the Beast than it was in the animated version, and that's a good thing.

All of the changes in the live action Beauty and the Beast will undoubtedly cause some heated discussions among Disney lovers, but I think we can all agree that one thing hasn't changed: Belle is still one of the best Disney Princesses of all time.