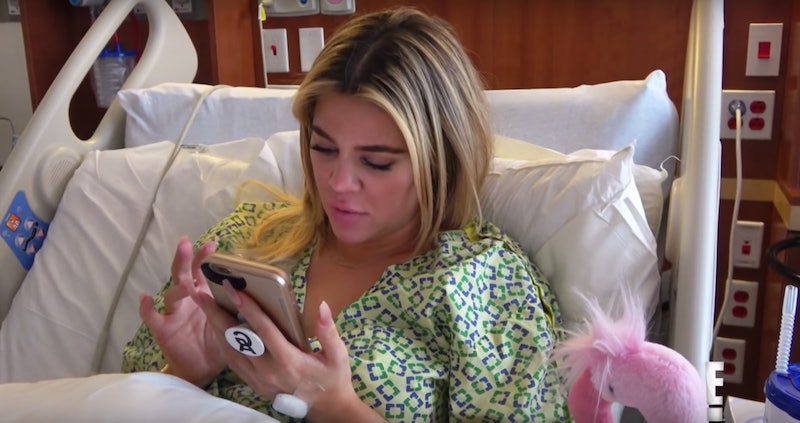 The Kardashians are already one of the most talked-about families in the world, and Khloé Kardashian's response to giving birth mid-cheating controversy has been one of the hottest topics yet. Though she remained pretty tight-lipped at the time, a new clip shows Khloé dealing with the Tristan Thompson drama right after giving birth.

The 34-year-old welcomed daughter True with Thompson back in April, but has stayed largely silent since then about the fact that the NBA player was accused of infidelity just days before her due date. But now, Keeping Up with the Kardashians has finally caught up with the months-old scandal. A teaser for an upcoming episode shows Kardashian in a hospital bed, in the midst of the fray, and sharing her feelings about the incident with the public for the first time. According to Kardashian herself, she's just one day postpartum, and glued to her phone as messages stream in.

Some are congratulations on the birth, but just as many appear to be questions about the shady footage of Thompson, and frankly, Khloé is exhausted by it. When her sister Kourtney asks Khloé whether people are writing her, the latter reveals:

"Mm-hm. Too many people. But writing about both things, so I'm like, 'Shut up.' I don't have the energy for that right now. I'm like, "Everyone leave me alone.'"

And it's true that the reality star does seem incredibly drained. In the clip, she's staring almost dazed into her phone, and can't even summon the energy to make plans with her assistant or do her usual sparring with her sisters. "I feel like everyone just wants you to know that you're supported," Kourtney tells Khloé hesitantly, to which the latter responds:

"And I appreciate that. I do. But, it's also — everyone has their own sh*t, that I know nothing about. And mine is thrown on the public of everything, and it's just...it's a lot harder to filter through stuff when it's this public and when I gave birth the following day. It's just too much."

Woof, it definitely does sound like too much. And it's such an important point Khloé made that complicated, layered situations like this one are incredibly common. It's just the level of fame and publicity involved that's uncommon. Anyone else would have their hands full just dealing with one of these elements — cheating and giving birth — behind closed doors. So the fact that this family has to deal with it in the spotlight makes it that much harder.

The fact is that it's an impossible situation, and there's nothing that anyone can do or say to make it easier. Pretty much anything instead of just staying out of it puts more pressure on Khloé at at time when she already has more than enough on her plate, so you can go ahead and zip your lips about Tristan being in Khloé's delivery room too, Kim.

So while it's hard to watch, the teaser clip serves as an important reminder that these people are human, and Khloé in particular has been through a lot this year.

And hey — the year isn't over yet. The new mom even admitted to a fan that she's been dreading these episodes in particular because she'll have to relive all the trauma. So maybe we should all take it easy on Khloé and stop looking for her to respond to something that she has no control over. Because at the end of the day, what do we really want her to say?