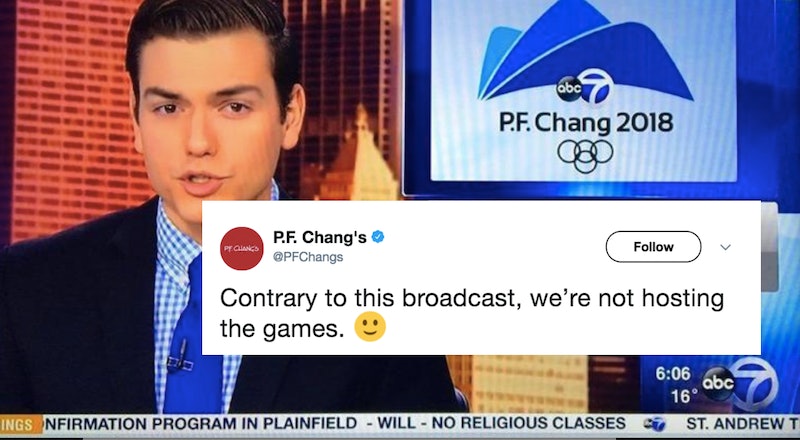 And today in things that make me so embarrassed about the state of this country that I’m really, really hoping the earth will open up and swallow me whole, we have this: Chicago ABC News affiliate LS-Ch.7 recently broadcast a report about the 2018 Winter Olympics that confused PyeongChang with P.F. Chang’s. On live TV.

I can’t believe we actually have to go over this, but, well, here we are: PyeongChang is a mountainous region in South Korea. P.F. Chang’s is a U.S.-based Chinese American/Asian fusion casual dining restaurant which is headquartered in Scottsdale, Ariz. They are not the same the thing. At all. And the screw-up goes beyond just the momentary confusion; the whole thing is so much worse than that.

During a report by weekend anchor Mark Rivera on Saturday, according to the Chicago Tribune, a graphic flashed up on the screen that was clearly meant to be some sort of stock image for the 2018 Winter Olympics — something that featured ABC’s and LS-Ch.7’s logos, the words “PyeongChang 2018,” and the five Olympic rings. However, that image was… not what appeared. Instead, what we got was ABC’s and LS-Ch.7’s logos, the words “P.F.Chang 2018, and four rings that are anything but the Olympic rings. Because the internet is forever, screenshots of this image are now rocketing around social media…

…And everyone is absolutely roasting whoever made the gaffe.

P.F. Chang’s also took a moment to clarify that they are not, in fact, hosting the 2018 Winter Olympics:

A spokesperson for LS-Ch.7 told the Chicago Tribune that the graphic that was displayed during Rivera’s report was originally made for a “satirical piece” which focused on imaginary Olympic sports dreamed up by viewers. (Rivera doesn't seem to have been involved with this piece of "satire.") The graphic was then accidentally used during Rivera’s broadcast, which, according to the Washington Post, opened with the line, “Another sign that North and South Korea are working on their diplomatic relationship: Kim Jong Un invited South Korea’s president to his country. During a meeting overnight, Kim Jong Un’s sister extended the official invitation.” (You can see a short clip of the report over at Mediaite.)

But LS-Ch.7’s explanation doesn’t really make the situation much better. There’s still a huge problem with the original “joke,” even without the graphic’s unfortunate misplacement: It’s racially insensitive at best and straight-up racist at worst, as many Twitter users have pointed out.

Journalist Jen Mac Ramos nailed exactly why the “joke” is so problematic:

It’s true that these days, P.F. Chang’s is more of an “Asian fusion” kind of place than a straight-up American Chinese kind of place; you’ll find sushi, pad thai, and lo mein all brushing shoulders with each other on the menu, which uses the exceedingly general phrase “Asian flavors” to describe its offerings. P.F. Chang’s is Asian in the same way that Olive Garden is Italian, or that Chevy’s is Mexican: It approximates its inspiration, but it’s sort of a thing all its own.

But P.F. Chang’s is still widely known for specializing in American Chinese — which makes sense, given that the restaurant chain’s roots lie in restaurateur Cecilia Chiang’s enormously successful restaurants, The Mandarin and Mandarette. Chiang was born in Wuxi, Kiangsu in the Republic of China in 1920 and lived at ruly extraordinary life, according to a 2007 profile of her in Marinij News; raised in Beijing, she escaped from the Japanese occupation of China during the Second Sino-Japanese War, married, had two children, and eventually escaped the country entirely during the Chinese Communist Revolution, settling first in Tokyo and then in San Francisco. In San Francisco, Chiang created The Mandarin, which grew so popular that by the 1970s, a second location, Mandarette, had opened in Los Angeles. Her son, Philip, eventually took over — and once he and restaurateur Paul Fleming went into business together in the ’90s, P.F. Chang’s became…well, P.F. Chang’s.

All of which is to say that there isn’t just one general “Asian” culture. 50 countries make up the continent, all of which have their own cultures, traditions, history, and people. They are not all the same. They are not all East Asian, either — and while we’re on the subject, the East Asian countries, which include Mainland China and South Korea, aren’t all the same, either. But, as Jen Mac Ramos highlighted, to make an equivalency between PyeongChang and P.F. Chang’s just serves to perpetuate harmful stereotypes and overgeneralizations.

White people, take this as your cue to do better than that.

Because there is no other option.