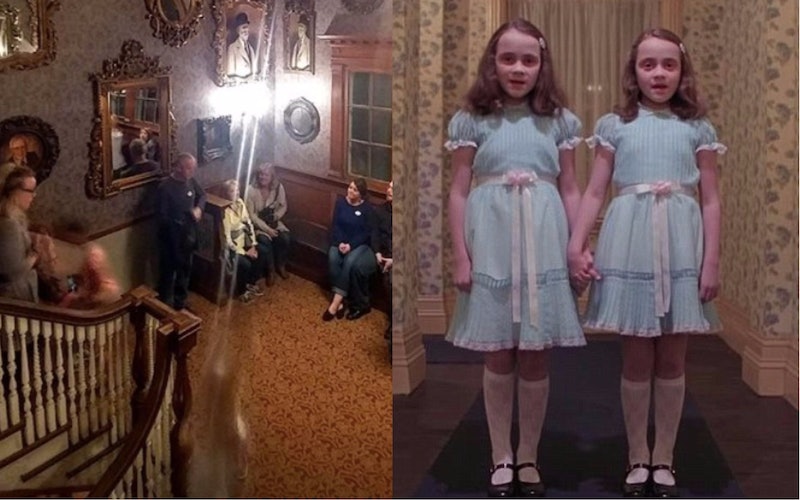 Because I’m a weirdo, I keep a running list of allegedly haunted locations I’d like to visit before I die. Near the top of that list is the Stanley Hotel, located in Estes Park, Colo. — and a recent ghost photo taken at the Stanley Hotel just reinforced how badly I want to go there. Although I’m fascinated by ghost stories and other, similarly weird topics, I’m actually quite skeptical of the existence of spirits… but sometimes I wonder whether that’s just because I’ve never really witnessed anything paranormal myself. Capturing an image on camera that simply cannot be explained might be a good way to challenge my beliefs — because honestly? Ghost photos are really, really spooky.

According to Jessica Martinez-Mausling’s Facebook post, this particular photo was taken on Sept. 16, 2017, when she and her family went on the Night Spirit Tour offered by the hotel. The photograph appears to feature the figure of a girl walking down the stairs in the center of the image — except there was just one problem: There were no young girls on the tour with them. “At first we tried to be logical and think we somehow missed her, so we asked our kids, their girlfriends, and our friend if they remembered seeing a little girl,” the Mauslings told the Huffington Post in an email. “Nobody did. We do not remember seeing anything on the stairs when we took the picture.”

Here's the photo in question:

Just to make the whole thing even freakier, there might actually be a second apparition present, as well. According to the Mauslings, there were two people sitting on the stairs leading up on the left-hand side of the picture when the photo was taken: The guide, and another participant on the tour who was using a cell phone. The guide is the person standing; and if you look directly below the guide’s hands, you can identify the other tour participant holding their cell phone. Immediately to the right of the cell phone screen, though,there’s a blur that looks like another person — someone who, like the ghostly figure on the center stairs, looks like they’re moving.

What's more, when HuffPo asked Ben Hansen, a former FBI agent and host of the television show Fact Or Faked: Paranormal Files, to take a look at the photo, he made this startling observation about this blurred figure: “Through the stair railing posts, you should see the lower half of this person like you do the tour guide and the shoes of the person on the stairs,” he said. “But I can’t make out any lower half.”

This is far from the first time a ghostly image has been captured on camera at the Stanley Hotel, and it will likely not be the last, either. Just last year, visiting guest Henry Yau, who is the Public Relations and Promotions Director at the Children’s Museum of Houston in Houston, Texas, snapped a photo at the hotel that appeared to show a ghostly woman and a small child at the top of a staircase. (Clearly staircases are big for the hotel’s noncorporeal tenants.) The photo subsequently went viral, because… well, of course it did.

The Stanley Hotel is, of course, best known as the inspiration for the Overlook Hotel in Stephen King’s 1977 novel The Shining. Wrote King on his website of the experience:

In late September of 1974, [King's wife] Tabby and I spent a night at a grand old hotel in Estes Park, the Stanley. We were the only guests as it turned out; the following day they were going to close the place down for the winter. Wandering through its corridors, I thought that it seemed the perfect — maybe the archetypical [sic] — setting for a ghost story. That night I dreamed of my three-year-old son running through the corridors, looking back over his shoulder, eyes wide, screaming. He was being chased by a fire-hose. I woke up with a tremendous jerk, sweating all over, within an inch of falling out of bed. I got up, lit a cigarette, sat in the chair looking out the window at the Rockies, and by the time the cigarette was done, I had the bones of the book firmly set in my mind.

But although Grady, his two daughters, and whatever the heck occupies room 217 of the Overlook (room 237 in Stanley Kubrick’s 1980 film adaptation of the novel) don’t actually exist, the Stanley Hotel is said to be home to a variety of spirits all its own. Opened in 1909 as a pet project of Freelan Oscar “F. O.” Stanley of Stanley Steamer fame, the mountain lodge itself has over a century of history behind it — and the land on which the hotel stands, of course, goes back even further.

Although it’s not clear exactly when the ghostly occurrences began to happen, it’s not unheard of for guests staying in any of the rooms to experience items moving or lights flicking on and off on their own; some have also reported hearing children laughing or finding what looks like the imprint of a child-sized body on unused beds. F. O. Stanley has reportedly been seen in the Billiard Room, while his wife Flora seemingly likes to hang out at the piano in the ballroom. And, perhaps most curiously, one of the hotel’s first housekeepers got caught in an explosion while lighting the backup gas lamps in one of the rooms during an electrical storm in 1911. She survived and went on to live a long life; however, it’s said that after her death in 1950, she returned to the hotel, where she continues to look after guests — particularly in the room where the accident occurred: Room 217.

It’s worth noting, though, that the truth of the housekeeper story is difficult to suss out. As the Estes Park Trail Gazette reported in 2014, news reports from the time of the accident conflicted in some pretty dramatic ways. In most accounts, for example, the housekeeper’s name was Elizabeth Wilson, although in others, it was Elizabeth Lambert. The Denver Post apparently also reported that Lambert was fatally injured during the accident; additionally, this version ofthe story also featured two more maids, Eva Colbern and Mary Donaldson.

Interestingly, most of the spirits said to haunt the Stanley Hotel are benign; the only one who’s a little more troubling is Lord Dunraven, who typically hangs out in Room 407 (or, according to some reports, Room 401 — as is often the case with ghost stories, accounts are somewhat inconsistent). Dunraven — whose full title was Windham Wyndham-Quin, 4th Earl of Dunraven and Mount-Earl, had previously owned the land on which the Stanley Hotel was eventually built; F. O. bought it off him in 1908. He was apparently not a super nice guy and known for being a womanizer; his ghost seems to like to creep on people, turn the lights on and off, and lurk in the window of “his” room.

Interested in hunting down some of the supposed ghosts said to haunt the Stanley Hotel yourself? The Night Spirit Tour offered by the hotel “takes you to a few darkened spaces and introduces you to the ‘active’ phenomena and spirit folklore surrounding our 100+ year old hotel,” according to the Stanley Hotel Website. It’s about 90 minutes in length; its standard price is $18 per person, although if you’re a guest staying at the hotel, it’s $25. Oh, and while you're there, tune the television to channel 42; The Shining plays on loop on it 24 hours a day.