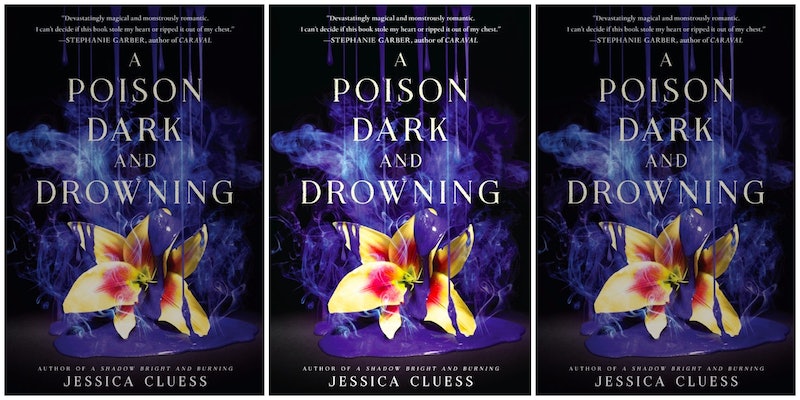 In A Shadow Bright and Burning, Jessica Cluess introduced us to Henrietta Howel: the first female sorcerer that anyone has seen in decades, whose powers are interpreted as the fulfillment of an old prophecy. A Poison Dark and Drowning continues Henrietta Howel's story, and Bustle's got a sneak peek at the cover for you below, along with an excerpt from the highly anticipated YA fantasy sequel.

Set in an alternate version of Victorian London, Cluess' Kingdom on Fire series puts readers in the shoes of a young woman torn in different directions by others' expectations. Howel is a magician and a sorcerer, and both groups have a plan for her. Meanwhile, she's caught in at the apex of a love triangle with her childhood bestie and a roguish type, and one of them might be dying. Put simply, Henrietta Howel has a lot on her plate at the beginning of A Poison Dark and Drowning, and things are only going to get more complicated from there.

Check out the cover for Jessica Cluess' second Kingdom on Fire novel, and read an excerpt from A Poison Dark and Drowning below. Then, be sure to let me know what you think of this new YA title on Twitter!

When I’d tried so desperately to be commended as a sorcerer, I hadn’t considered what it would mean for the country. Now that I had taken the place of their prophesied one, I had increased the danger, and offered the men and women of England no real protection in return. Scanning the rocky path with the sea at my back, I thought of all the people to whom I’d given hope ... and how cruelly those hopes would be dashed.

Enough. I’d come to Cornwall to find the answer to our problems; there was no going home without it.

“I’m just glad the Spider didn’t turn up,” Magnus muttered beside me.

“She doesn’t come up the cliffs, does she?” I asked.

“You never know.” His expression hardened.

“Are you all right?”

“Do you always talk this much when you’re on a quest, Howel?” I’d never heard him sound snappish before. He cleared his throat. “Forgive me. It’s just — ”

“Quiet.” Blackwood stopped in his tracks and slowly took out his stave. On instinct, I grabbed Porridge from its sheath as well. “Do you hear that?” His green eyes narrowed as he surveyed the terrain.

“No,” I said, then instantly shut up. The world about us seemed to be holding its breath. No birdsong, no breeze. Only dead silence.

Then I could feel it, the movement of something in the mist. Something incredibly wrong. Blackwood warded a blade on his stave; I could see the dim yellow outline of it.

“Get down!” Blackwood shouted as a Familiar with eight horrid legs and gnashing fangs attacked.

I exploded in blue flame, throwing a fireball at the monster. It dodged far too nimbly, and sprang into the air with its legs splayed wide. Magnus and I rolled out of its way as it landed, jaws clicking.

This was one of Nemneris’s lice. I’d seen them before, but only from the safety of a water glass in Agrippa’s library. Their bloated abdomens and eight legs were spider-like, while their pale, grotesque torsos, bald heads,and arms were almost human. This monster had gnashing pincers where a mouth should have been. A long, gooey stream of venom dripped from its fangs.

The louse screeched as it leaped for Blackwood. He weaved and slashed with his blade. A plume of black blood gushed from the creature’s leg, and it retreated a few steps, clicking in pain.

Magnus slammed down his stave and sent a shockwave through the earth, throwing the beast off balance while I fired again. This time my magic found its mark, and the Familiar shriveled as the flames consumed it, the eight legs curling into its body. There was a grotesque popping noise as its black eyes exploded, gushing viscous ooze. The acrid smell of its death burned my throat.

“Howel, look out!” Magnus barreled into me, shoving me roughly to the ground. Another louse leaped out of the mist, landing on top of Magnus. My movements were too slow, too sluggish.

“Hold on!” Blackwood shot warded force at the thing and got it in the chest. It tumbled off Magnus, who lurched to his feet, clutching a bleeding arm. But he was alive. Thank God.

I twirled a spell I’d designed before, a blend of my sorcerer and magician powers. The earth formed a great hand to drag the monster down, but the Familiar scrambled out of its grip too fast. Damn it all.

Magnus lifted his stave ... and collapsed onto his back. His head lolled to the side, his body limp. The Familiar raced forward, pincers clicking with glee. I screamed, trying desperately to think of another spell.

Something sliced out of the fog, slamming directly into the Familiar’s head. The louse jerked backward as black ichor sprayed over the ground. The beast twitched once and became still, its hideous face cleaved neatly in two by an ax. I hurried to Magnus and knelt by his side.

“Who’s there?” Blackwood called, whirling around. A small boy, no older than twelve or thirteen, approached out of the mist. He was clad in worn trousers and a threadbare vest, a cap atop his head. The boy looked to Magnus, who was groaning in pain.

Magnus. His arm sported two swollen puncture wounds, hot and already throbbing with infection. The Familiar had poisoned him.

“No,” I whispered, thinking fast. Were there healing spells or medicines I’d brought with me? What had I learned from Fenswick about slowing poison? There was no bloody time to lose.

“If we don’t treat it, he’ll die.” The boy echoed my frantic thoughts. He yanked his ax out of the monster’s skull. It came away with a wet sound, like pulling a knife from a pumpkin. “We’d best leave. They hunt in packs.” The boy wiped the ax blade on the grass. “Follow me.” He motioned to us to follow, and Blackwood and I each took one of Magnus’s arms. We hoisted him to his feet and pulled him along between us.

The boy led us back to the ruins of the castle, dodging over the piles of rubble and moss-covered stones. Entering what had been the castle’s outer wall, he uncovered a cellar door that led below ground. The boy pulled the door open with a loud creak, and waved us ahead.

We were following an ax-wielding stranger underground, where the air smelled stale and damp, but all I cared about was Magnus’s racing pulse as I helped lower him inside, my cheek pressed against his neck. Carefully, Blackwood and I laid him onto the muddy ground.

Lit candles had been wedged into the rocky walls. Once the boy closed the door, the only natural light came from a crack in the rock ceiling. Blackwood had to duck to avoid hitting his head as I knelt beside Magnus to watch the boy at work.

The boy stripped Magnus’s coat off and ripped his shirt open, exposing his chest. I nearly turned away from the immodesty of it, but checked myself. Magnus was dying, for God’s sake. I remained focused on his face.

“Who are you? How do you know what to do?” Blackwood’s voice echoed in the cavern.

The boy didn’t answer. Instead, he took a knife and cut into the wounds on Magnus’s arm. Clear, shining liquid welled out of the bites. The boy took a deep breath, then sucked at the marks, spitting the poison onto the wall.

“Can you do that?” I asked, stricken with horror.

The boy pulled his cap off his head. Wild, bright-red curls tumbled down. With the addition of the hair, the boy’s entire appearance changed. His lips seemed fuller, the tilt of his eyes more feminine. This was a young woman, not a little boy. She looked at me; there was a hard knowledge in her gaze. “Aye. If you’d like, pass me that bag.” She nodded at a leather pouch by my side. “Then go above and keep watch. There’s precious little else you can do.”