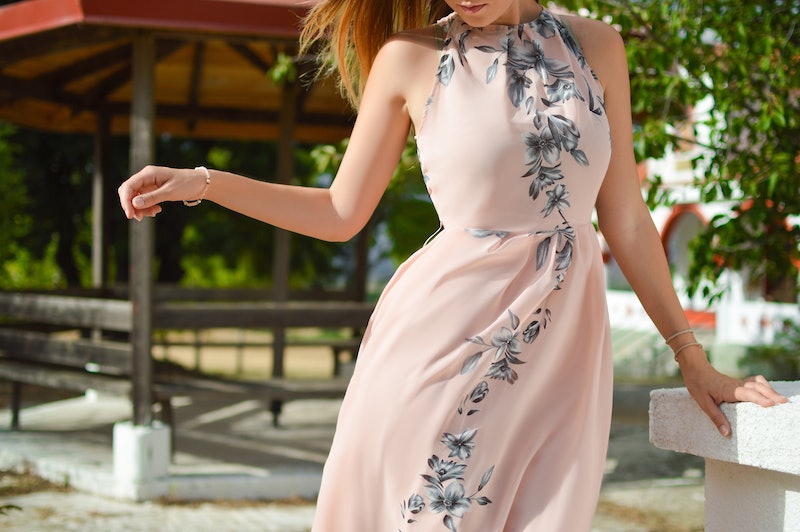 In the age of viral internet, it seems like every week we hear another outrageous story about dress codes in high schools — most of which, unfortunately, target young women, and end up compromising their education in some way by either pulling them out of class or making them feel uncomfortable in their own bodies. One school's effort to get ahead of dress code violations, though, only seems to make the problem worse; Pewaukee High School in Milwaukee, Wis. makes "dress-wearing students" send pictures of their dresses before dances for approval. And the policy is nothing new — apparently, it's been in place since 2015. (Bustle has reached out to Pewaukee High School for comment, and will update this post upon reply.)

The Journal Sentinel reports that although the policy has been in place since January 2015, parents are now reacting to a recent email enforcing it in anticipation of the upcoming Homecoming dance. Pewaukee Superintendent Mike Cady said to the Journal Sentinel that the policy "isn't sexist."

"It's really out of a sensitivity to our students," said Cady. "We want [school dances] to be a positive experience. We don't want anyone to show up and have to be sent home because of a dress-code violation."

Many parents who received the email have been quick to disagree.

"The girls are essentially being held responsible for the wayward thoughts [administrators] think boys have," said Rebecca Sheperd, the mother of a freshman girl at Pewaukee High School, to the Journal Sentinel. "They're being told, 'You are the problem.' These are the roots of rape culture, frankly."

It's an all-too-familiar tune to people who have been keeping up with stories dress code violations. Not only are incidents like these disruptive to girls' educations, but as Sheperd points it, it frequently seems to hold them responsible for the boys' behavior toward them, enforcing a dynamic that may seem harmless in regards to high school dress code but is entirely dangerous when it becomes a foundation for victim-blaming in much more serious situations. Rather than shifting the conversation toward men respecting women, women are constantly shamed and held responsible for how they present their bodies — and sexist enforcement of dress code shines a blaring light on it.

It doesn't just hurt women in the long run, but also directly impacts their educations. Students violating the dress code have been suspended, not only denied their education that day but forced to carry that suspension on their permanent records; one school adopted a "shame suit" they made dress code infringers wear, making the violation a personal target and impacting students' self-esteem; one student even claimed that when she covered up a scoop-neck shirt with a sweater and didn't change it completely the way a principal asked, he escalated it to the point of threatening to have her arrested.

There is no doubt that dress codes impact women more than men (both in school and, unfortunately, in the professional world), but at the very least we get a little closer to addressing the problem every time one of these stories goes viral. The parents of Pewaukee High School are speaking out. Earlier this year, a mom refused to comply to a school's request to bring a change of clothes for her daughter, then called out the school in a public Instagram post. One school recently caught the attention of advocates for its progressive dress code, which firmly banned any oppression or marginalization of any kind — a policy that demonstrates that dress codes don't necessarily have to be a bad thing, so long as they are held in a nondiscriminatory, productive manner.