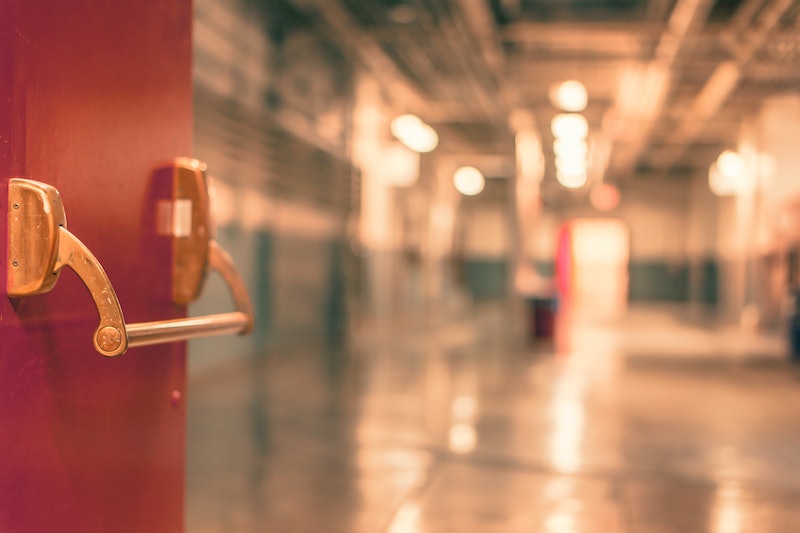 Rosey Abuabara was surprised last week when her 17-year-old daughter, Sophia, called her in tears because she’d been cited for violating her school’s dress code. The offending garment? A high-necked, long sleeved dress that falls 4-inches above the knee. The Texas mom protested the school’s dress code policy by refusing to bring her daughter a change of clothes. She also took to social media to complain about what she regards as a sexist policy and to highlight the way that girls’ clothing seems to be more heavily policed than boys.’

Sophia is currently a junior at Tom C. Clark High School in San Antonio. Last Friday, an administrator stopped her for violating the school’s dress code, claiming that her striped dress was too short. Sophia was required to call her mother for a pair of pants to change into. Yahoo News reports that Rosey went to the school to discuss the matter with the school principal, but refused to bring a change of clothes, as she didn’t want to disrupt her daughter, who was preparing to take three exams that day.

Rosey posted an image of Sophia in the dress on social media. On Facebook, she captioned, “Don't understand how this is a dress code violation. She's 5'9". It's hard to find anything that fits longer.”

In comments on her Instagram post of the same photo, she said that she and Sophia measured the dress and that “It's exactly 4 inches above the knee,” which does seem to comply the Northside ISD (NISD) dress code. Rosey also alleged that “[t]he principal tried to call [Sophia] out during her Latin exam,” though the teacher had him wait and speak to her after class.

This issue was addressed by campus administrators in a manner consistent with other dress code violations on campus and no disciplinary action was taken. The student was not taken out of class during a test, rather she was sent to visit with campus administration after her test was completed.

This photo shows Rosey measuring the four inches from the bottom of the dress to Sophia's knee:

In an Instagram post, Rosey compared the photo of her daughter to one of a male student in the parking lot, who is shown wearing a tank top and shorts that are shorter than Sophia’s dress. Rosie captioned, “My daughter got #dresscoded for this dress. They said it was too short. Yet, boys can dress like this??”

A person who claims to be the student in the photo (who’s face is blurred) chimed into the comments to clarify, “I think it's important to note the context of my clothing, I didn't wear that around school all day, those were my workout clothes and I changed before going to the weight room after school.” He added, however, “I think the problem is not so much with the boys who wear [shorts] as it is with the administration and an uneven application of the rules (which I do acknowledge exists, and do not support).”

The meeting between Rosey and the school principal, Dr. Jerry Woods, appears to have been contentious. In a Facebook video, Rosey alleged,

Eventually, she was escorted from campus by campus police.

Stories like this are all too common. Just check out this one about a young woman who was told to cover up her exposed shoulders. Or this dress code policy that told girls, “you can't put 10 pounds of mud in a 5-pound sack” (!). Or this teen who lost her position in the National Honors Society for showing her shoulders. Or this girl who was suspended on the last day of school when she wore a dress with a scalloped hemline. The list goes on and on.

Schools have every right to have standards of dress for their students, but, too often, those standards disproportionally emphasize issues with women’s clothing, policing everything from their legs, to their arms and shoulders, to their collarbones, usually in the name of preventing other students from becoming “distracted.” Dress codes rarely impose such strict standards on male students. There in an unspoken assumption at work here: That girls’ bodies are inherently sexualized and therefore “inappropriate” within an academic environment — and that it’s somehow their responsibility to prevent other students from losing focus. In contrast, boys’ bodies just get to be… bodies.

Again, dress codes aren’t necessarily a bad thing — but they shouldn’t become a barrier to girls’ education, nor should they disproportionally impact female students.