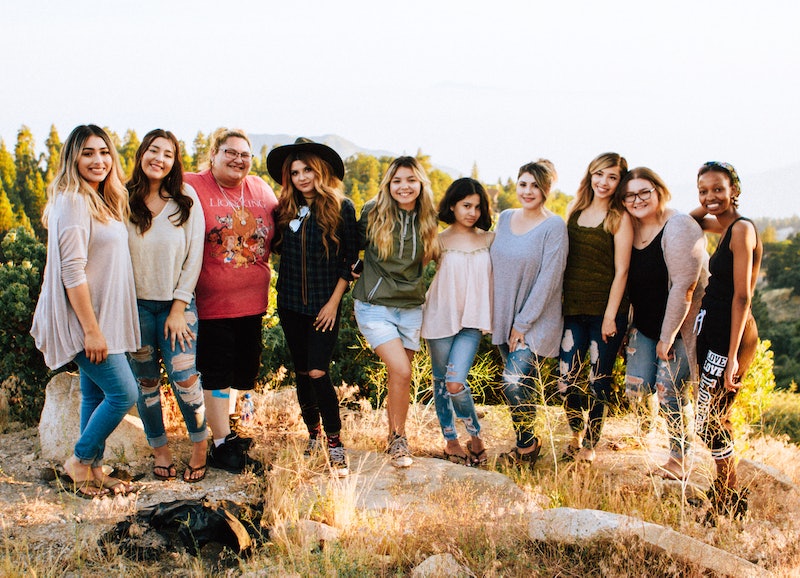 In a world where we’re continually hearing about sexist, discriminatory dress codes that shame girls for simply having bodies and penalize students for everything from their religious beliefs to their race, here’s a breath of proverbial fresh air out of Illinois: Evanston Township’s new school dress code is wonderfully inclusive, with its goal not being to shame or punish its students, but rather to create a healthy learning environment for its students. It is, in short, how to do a dress code right.

The dress code was released on Monday in preparation for the start of the new school year next week, according to the Chicago Tribune. The complete policy is available to read online here — and honestly, I highly recommend that everyone does, because there is so much that it does well. It begins with a philosophy — that is, a statement of what the dress code is meant to accomplish and why — which, right off the bat, hits exactly the right tone:

To ensure effective and equitable enforcement of this dress code, school staff shall enforce the dress code consistently and in a manner that does not reinforce or increase marginalization or oppression of any group based on race, sex, gender identity, gender expression, sexual orientation, ethnicity, religion, cultural observance, household income or body type/size.

Heck. And yes. It’s true that we shouldn’t need to spell all this out — but given the current state of our world, clearly we do, and the fact that the school has done so matters a lot.

The values of the school, as they pertain to the philosophy, state that “all students should be able to dress comfortably for school and engage in the educational environment without fear of or actual unnecessary discipline or body shaming”; what’s more, enforcement of the dress code “should not result in unnecessary barriers to school attendance.” The goals of the code include allowing students to “wear clothing of their choice that is comfortable … [and] expresses their self-identified gender,” to “wear religious attire without fear of discipline or discrimination,” and to create a safe environment by preventing students from “wearing clothing or accessories with offensive images or language … that denote, suggest, display or reference alcohol, drugs, or related paraphernalia or other illegal conduct or activities … [or] that reasonably can be construed as being or including content that is racist, lewd, vulgar or obscene.” All students are to be “treated equitably regardless of race, sex, gender identity, gender expression, sexual orientation, ethnicity, religion, cultural observance, household income or body type/size.”

The existence of the philosophy in and of itself is notable; dress codes are often rooted in society’s puritanical notions of what’s “appropriate” or “inappropriate” — which typically amounts to “I don’t like it, so you can’t wear it,” rather than any concrete sense of reasoning. What’s more, the philosophy also includes this incredibly important clause: “All students and staff should understand that they are responsible for managing their own personal ‘distractions’ without regulating individual students' clothing/self expression” — a policy that directly addresses the fact that so many girls have been written up for dress code violations and pulled out of class purely because their bodies are assumed to be “distracting” for boys.

We’ve seen it happen time and time again, and each time, the message it sends is exactly the same: Boys’ education is more important than girls’. Boys cannot have their education “disrupted” by “distractions,” but it’s A-OK for girls to have their education disrupted by being pulled out of class because boys might be distracted by the simple fact that they exist. And that message? It is not right. And it is so, so important that we’re now seeing a dress code that rejects that message in favor of an inclusive one that values all students’ education.

The code itself operates on a very basic principle: “Certain body parts must be covered for all students at all times,” wherein these body parts are “genitals, buttocks, breasts, and nipples.” (Noticeably not included is cleavage, which, the policy says, "should not have coverage requirements." Given that the same shirt can fit multiple people multiple different ways depending on the way their bodies are, this is a really important point.) Students must be wearing a shirt ("with fabric in the front, back, and on the sides under the arms"), some kind of bottom (pants, jeans, a skirt, sweatpants, leggings, shorts, a dress, etc. — all of which are mentioned as examples of things that count toward this requirement), and shoes.

That’s it. A top, a bottom, shoes, and the guarantee that certain body parts are covered. For all students. See? It’s really not that complicated.

​There are details, too, to make sure that everyone is clear on what subcategories of clothing satisfy the above requirements. As long as they meet the shirt, pants/equivalent, shoes, and coverage specifications, students are allowed to wear:

Hats (facing whatever direction you want, as long as your face is visible), religious headwear, hoodies (with the hood up if you want, again as long as your face is visible), “fitted pants” (including leggings, yoga pants, and skinny jeans), pajamas, ripped jeans (as long as your underwear and butt are covered), tank tops (spaghetti straps and halter tops are OK!), visible waistbands or straps on undergarments worn under other clothing (so, underwear is not outerwear, but if your bra strap shows underneath your spaghetti strap tank top, it’s OK), and athletic wear (athleisure equals thumbs up).

What students can’t wear are — or should be — common sense-type things:

Clothing or accessories that have language or images that are violent; depict drugs, alcohol or other illegal items and activities; that include hate speech, profanity, or pornography; which can be used as weapons; or which otherwise create “a hostile or intimidating environment based on any protected class or consistently marginalized groups.” You also can’t wear swimsuits as clothing unless it’s required for a specific class or athletic activity, headwear that obscures your face unless it’s for religious observance, or clothing that “reveals visible undergarments” (although again, visible waistbands and straps are OK if they’re worn under clothing).

There are rules for teachers and staff, too. In addition to the whole thing where the dress code must be enforced consistently for all students — not just for some students — staff are not to enforce it in any way that shames students. There will be no strap or hem measuring, no accusations of being “distracting,” public call-outs, and the like.

As Christine Wolf, a community activist in Evanston, told the Chicago Tribune, the new dress code “speaks volumes about how much they respect their students.” Indeed, the school worked with the students to develop the code. According to the Tribune, the students had been bringing their concerns about the inequitable nature of the old dress code to the administration for some time; they were conscious of the fact that students of color and students with more developed bodies tend to be slapped with “violations” of dress codes much more often than white students, straight-size students, or students with less developed bodies do. So, last year, the students conducted a survey addressing what types of policies they thought the dress code should have and worked with the school’s administrators to create a new one.

“It really shows a commitment to listening to kids and what they need and being open to as many different voices as possible,” Wolf said.

The goal of a dress code shouldn’t be to punish students for not following it. The goal should be to create a safe, welcoming learning environment for all students. That’s what Evanston Township’s dress code has done — and it’s an example that schools across the country would do well to follow.