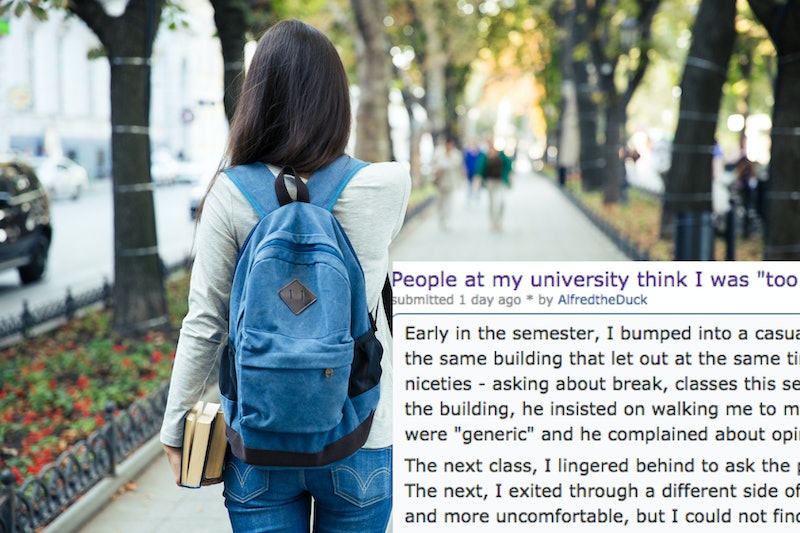 “I don’t want to be mean, or unkind,” a female college student wrote on the /r/TwoXChromosomes subreddit, “but I want to be safe.” The woman, who posted under the Reddit username AlfredTheDuck, recently shared her experience with a male student who was following her around campus. After she told him he made her uncomfortable and to leave her alone, friends and classmates said her response was “unnecessarily cruel.”

She described the fellow student as a “casual acquaintance” who appeared to start following her around after they ran into each other after class. He initially started waiting for her outside multiple classes and eventually it escalated to him “conveniently showing up outside [her] dorm room,” according to her post. Although she wrote that she wasn’t comfortable with the situation, “I could not find it within me to tell him outright to leave me alone. I felt that it would be too mean, or too blunt, or too harsh.” She began changing her schedule — where she walked and when she went to and from class — in order to avoid him.

“Why do I have to be responsible for the emotional wellbeing of a boy who followed me around … over my own safety?”

“I didn’t think this was malicious - just that he had absolutely no bearings on social cues,” she said. “Still, this did not make the situation any less frightening or stressful for me.” He proceed to message her through a third-party messaging app, after she hadn’t responded to his texts, asking if he made her “uncomfortable.” After speaking at length to her therapist about the situation, she eventually responded, “Yes, you make me uncomfortable. Please don't speak to me again.”

She said people (“both those that knew about my discomfort with the situation, and those who didn’t”) have accused her of being too harsh in her response, something she had been worried about and made her hesitant to confront the student following her. “Why do I have to be responsible for the emotional wellbeing of a boy who followed me around … over my own safety?” she wrote. “Why are women expected to coddle men despite our own discomfort? Why do my peers feel the need to enforce this standard?”

It’s unfortunately an all-too-common question women ask themselves driven, in great part, by an societal expectation of women to be “nice,” docile, submissive. Even if it means putting themselves at risk. It’s driven in part by pop culture that tells us “stalking is romantic,” perpetuating the idea that persistence when you hear “no” is part of courtship and not harassment. It’s reinforced by reactions to the #MeToo movement that have men asking disgruntledly, “Well, can I even hug women anymore???”

We are not your teachable moments.

Statistics show that women in the U.S. are at greater risk of gun violence being 16 times more likely to be shot and killed by a gun than women in other high income countries. Much of that gun violence is perpetrated by women’s partner. The Lautenberg Amendment, colloquially referred to as the “boyfriend loophole”, doesn’t prevent domestic abusers from purchasing a weapon provided they were not married to or living with their victim at the time of the crime.

Additionally, much of the country is still very much confused at what is and what is not consent. In fact, a 2015 study found that almost one-in-three college men say they would act on “intentions to force a woman to sexual intercourse” if they believed there would be no consequences.

Understanding consent isn’t limited to the bedroom. It informs how we act in any encounter we perceive as romantic, whether that’s how we touch someone or how we talk to them. While we, on an individual basis, may not be as adept at reading social cues, we, on a cultural level, need to recognize the ways in which women are conditioned put aside their own safety for men’s egos and comfort.

“You do not owe friendship or even conversation to anyone,” one person responded on Reddit. “You did NOT do anything wrong by being firm and honest with him, especially since he asked you a question and you answered that question.”

As Mattie Kahn succinctly tweeted, “Women’s lives aren’t men’s teachable moments.” The reaction to this female college student’s experience speaks to a greater problem with how we expect women make space for men. Straightforward rejection should not automatically equate with being “mean” or “too harsh.” A woman shouldn’t be villainized simply for speaking up for herself.