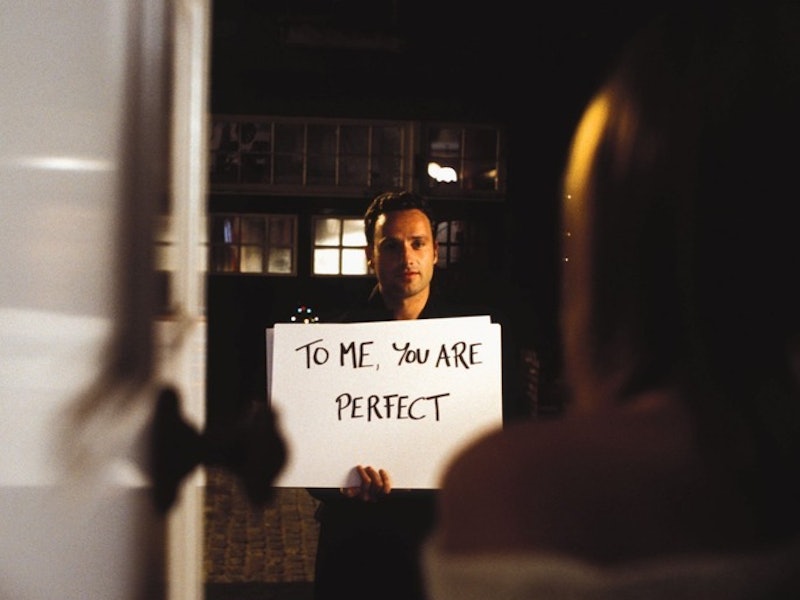 According to a new study, romantic comedies aren’t always all that romantic. While they give us hope and happy endings, a lot of movies make stalking seem romantic — and even the best way to "get the girl". For example, the scene in Love Actually when Mark professes his love for Juliet via poster boards? It may seem romantic, I mean, I thought it was romantic, but the reality is that we’re placing romantic notions on what’s actually creepy behavior, at least in regards to how this study is interpreting these displays of what romantics would simply define as “the grand gesture.”

The study out of the University of Michigan suggests that when we, women especially, watch these romantic movies where men are literally chasing after women, it forces us to tolerate real life stalking. When women and society see this sort of behavior as charming or endearing, it makes stalking cases harder to prove and convict.

As the head researcher for the study, Julie Lippman told Huffington Post, "Men are socialized to be persistent and women are socialized to be flattered by it.” And while she admits that nine times out of 10 it’s not abusive in nature, it doesn’t change the fact that 3.4 million Americans are somehow affected by stalking every day and 78 percent of those victims are women. Of course this doesn’t mean that men don’t get stalked, for example, look at Sleepless in Seattle, but it does mean that Hollywood, as is usually the case, has taken something that could be problematic and romanticized it.

Not to rain on your parade, but here are scenes from movies that you probably love, where the romantic highlight actually qualifies as stalking... starting with Love Actually, of course.

Mark is in love with his best friend's new wife, Juliet. OK; that stuff can happen. However, where it gets creepy is when Mark records their wedding, focusing solely on Juliet's face, all close up, then shows up at the door professing his undying love in the form of cards. While the latter seems romantic in theory, the former, definitely not so much. Mark shouldn't be allowed near a video camera EVER AGAIN.

Who doesn't love The Notebook? Or more specifically, who doesn't love Ryan Gosling in that beard? But the reality is that we're talking about a guy who not only wrote his ex a letter for every day of a calendar year, but then bought and restored the house she loved. Granted, she never got any of Noah's letters (thanks, mom!), but that's pretty much stalking an ex by the very basic definition of it ― 365 letters? Wow.

I put American Beauty pretty high up there on my list of favorites. However, we can't deny the fact that Ricky Fitts is clearly stalking Jane ― I don't care how pretty Wes Bentley's eyes are! Despite video taping her entire family (Ricky and Mark from Love Actually should start a club), and lighting up her name in fire on her lawn, Ricky still gets the girl. On top of that, there's also Lester Burnham in there stalking Jane's best friend, but he doesn't get her and that crazy age difference doesn't make for a romantic story.

First, if you've never seen St. Elmo's Fire , you should. It's a classic '80s movie. Secondly, we have two stalking situations in this movie. We have Kevin who's obsessively in love with his friend Alec's girlfriend, Leslie, and Kirby who's just as obsessed with a girl he went on one date with, Dale. While Kevin keeps his stalking to a minimum, by "just" taking photos of Leslie and keeping them in his living room, Kirby actually physically stalks Dale all over the place. When you watch it, you can't help but feel for Kirby, adorably played by Emilio Estevez, but his obsession runs pretty deep.

The Graduate is known for not just being a classic and a major highlight in Dustin Hoffman's career, but it also gave us what is undoubtedly, one of the most iconic endings to a move ever ― after some proper stalking.

After being rejected by Elaine, Ben proceeds to stalk her all the way up to Berkeley where she's going to school. He doesn't just stalk her around campus, but gets an apartment in town to be close to her, then breaks up her wedding... but the whole time you're thinking, "OMG. They're meant to be! This is romance!" And it is, to a degree, but he's also stalking the hell out of her.

I just want to say it physically pains me to put Say Anything on the list, but yes, Lloyd Dobler is a stalker. He stalked Diane all through out high school, at the mall where they had an imaginary date, during graduation, and then, after they broke up, stood outside her bedroom playing Peter Gabriel's "In Your Eyes," the song to which they lost their virginity to each other. It is definitely one of the most romantic scenes out there, but when you strip away all that Hollywood charm, you get a crazy man, in a trench coat, outside a girl's window, with a boombox in the air.

Since I'm pretty sure a lot of us have been catching up on all our favorite David Bowie movies recently, because he was an absolute gift to the world, of all the characters he played, his creepiest was in Jim Henson's Labyrinth. Not only does Jareth, the Goblin King lure teenage Sarah into his world, but he stalks and seduces her in ways that no teenager could possibly be able to really understand. For me, Labyrinth was a sexual awakening when I first saw it as a kid, but when I watched it two weeks ago, I realized that Jareth needs to take things down several notches. Maybe even get a restraining order against him.

In Crazy, Stupid, Love we have two stalking situations. We have Cal stalking his ex-wife, from the backyard no less on one occasion, and his son, Robbie, stalking his babysitter, Jessica. Although Jessica has made it quite clear that she’s too old for Robbie and therefore not interested (she actually has eyes for Cal), he doesn’t give up ― because that’s what his dad has taught him.

In the end, both Cal and Robbie, "in grand romantic gestures," to quote Cal, publicly announce their love for the women they’ve been stalking… then everyone claps and lives happily ever after. Well, except for Robbie who’s still too young for Jessica, so I'm sure he'll continue to stalk her, especially since she gave him nude photos of herself, because WTF.

Since Meg Ryan stalked Tom Hanks in Sleepless in Seattle, I guess it was time to turn the tables in You’ve Got Mail .

In this romantic comedy, we have two people who have met online, but who are enemies IRL. When Joe, of Fox Books realizes that the woman he’s been chatting with is Kathleen, who owns the book store he puts out of business, he pretty much begins to stalk her. He continues the email relationship, knowing full well who she is, all while trying to be her friend by popping up in places where she goes. I love Tom Hanks, but he’s a total stalker in this, right up until the very end when he reveals his true identity.

10. There's Something About Mary

In There’s Something About Mary, we don’t have just Ted who’s been stalking Mary since high school, even going so far to hire a private investigator to find her, but we have that P.I. stalking her, some other dude she once dated, and another guy who pretends to be a British handicapped man, although he’s an American pizza delivery guy ― like what?! Although it’s a Farrelly brothers film, so that all makes perfect sense actually.

However, you spend the whole movie rooting for Ted, Ben Stiller’s character, to get with Mary. You don’t take into consideration that he’s been stalking her for 20-something years; you just see how romantic it is and how badly they should be together.

Stream Something About Mary here.

If it isn't the story that made stalking look like the best idea on the planet! Whether it's Shakespeare or Leo and Claire Danes in 1996, Romeo and Juliet will always be an epic tale of star crossed lovers ― star crossed lovers where the guy watches the girl through her window, follows her around, makes her fall in love with him, then they both commit suicide. It's romantic at 13, but at 30, you might feel a little differently.

More like this
The Best Time To Date After A Breakup, According To Experts
By Bustle Editors
Are Virgo & Capricorn Compatible In A Relationship?
By Kristine Fellizar
7 Women Share Their Best Orgasm Stories
By Lexi Inks
How To Use Astrology In Dating, According To The AstroTwins
By Brittany Beringer
Get Even More From Bustle — Sign Up For The Newsletter