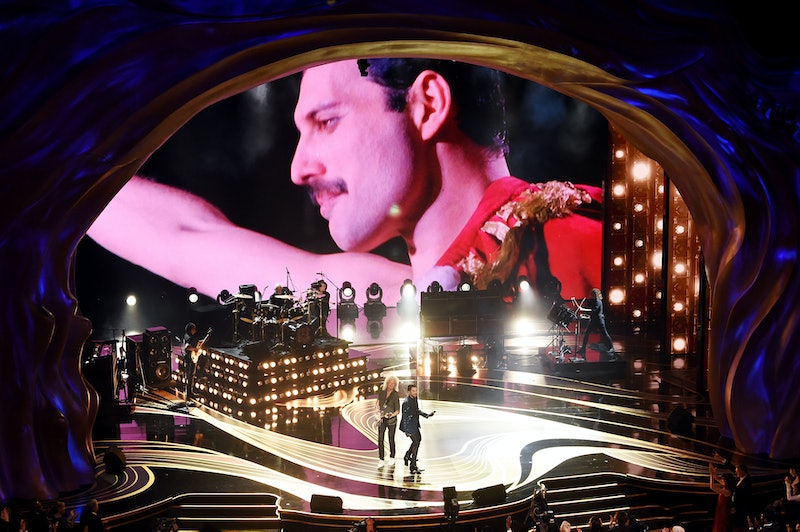 The Academy's decision to go host-less at this year's Oscars left one major question lingering in the air: How is the show going to open without the usual monologue? Despite not having a celeb ushering in the night per usual, Queen's 2019 Oscars performance provided a warm welcome to the ceremony, and the audience gleefully got on their feet and rocked along.

Traditionally, the Oscars ceremony starts off with either a comedic monologue or, if you're Hugh Jackman, an opening song-and-dance number. However, after much controversial consideration about whether or not there should even be a host for the 2019 Oscars, someone producing the show clearly remembered that they would have most of one of the world's greatest rock bands in attendance. While Queen, whose story is featured in Best Picture nominee Bohemian Rhapsody, will never be the same without original lead singer Freddie Mercury, who died in 1991, their Oscars performance reminded fans that they've still got it.

The band was joined onstage by Adam Lambert, the American Idol runner-up who has filled in as Queen's frontman since 2011. Prior to their Oscars performance, it was announced that Queen + Adam Lambert, the official name for the retooled group, will be embarking on a 23-date tour later this year called The Rhapsody Tour, a reference to both the success of the Oscar-nominated film and, of course, the band's iconic 1975 song, "Bohemian Rhapsody."

Judging from Sunday night's performance, fans can expect that tour to be just as energetic as their Oscars opening. The dual performance of "We Will Rock You" and "We Are The Champions," arguably Queen's two most arena-friendly songs that get to the core of what keeps the group's legacy alive today, was enough to get the crowd to leap out of their seats and pay reverence to one of rock's greatest acts. What the Oscars had that the tour won't, however, is footage of some of Hollywood's biggest stars singing and clapping to some of the band's biggest hits.

Lambert and Queen kicked off the evening with a rousing rendition of "We Will Rock You" that had much of the crowd stomping and clapping along. It rang true to the Bohemian Rhapsody scene in which Brian May explains to Mercury (portrayed in the film by Oscar nominee Rami Malek) that he wanted to "give the audience a song that they can perform." Lady Gaga, Emma Stone, Javier Bardem, and Octavia Spencer were just some of the stars in attendance that briefly turned the Oscars into the evening's most luxurious rock concert.

The band followed up their most stomp-able song with the cheerful, unifying anthem "We Are The Champions." Unfortunately, not everyone who attends the Oscars will, in fact, be the champions at the end of the night, but there was no better sentiment to kick off the ceremony. The performance may have been just a quick taste of the musical stylings of Queen + Adam Lambert, but it's undeniable proof that the spirit of the band is alive and well today.