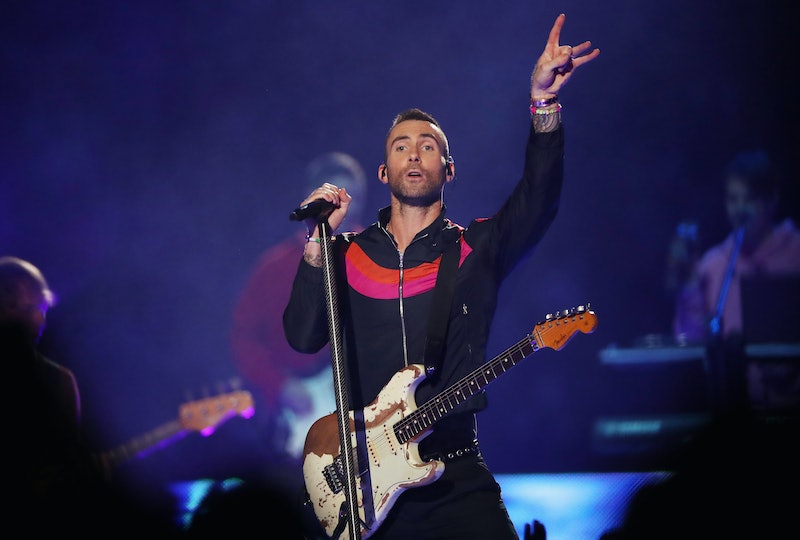 The history of Super Bowl halftime show performers has consisted of only the biggest of show stoppers of the main stage, making not only their actual performance a big deal, but also the outfits they wear. Now that it's Maroon 5's turn, Adam Levine sported a Nike jacket and sneakers, causing a stir with many halftime show watchers on Twitter regarding the obvious clash with activist and former football player Colin Kaepernik's connection with Nike.

When fans see a double standard taking place, Twitter is nearly always the first platform to take notice. At first glance, Levine chose to keep his performance outfit casual, sticking to a more athleisure theme. But when viewers took a closer look at the Maroon 5 frontman's ensemble, they saw he was actually wearing a Nike zip-up jacket as well as a pair of unreleased Travis Scott x Nike sneakers.

The fact that Levine wore this particular brand for the NFL's halftime show performance who also made Colin Kaepernik the face of the brand's "Just Do It" campaign definitely had Nike fans and Kaepernik supporters scratching their skulls.

Needless to say, the comments that made waves pointing out the conflict of interest all throughout Twitter was nothing short of blunt and to the point.

It isn't reported yet why Nike and Maroon 5 chose to do this collaboration, but it's started another era of Super Bowl halftime show controversy.

Kaepernik had become a free agent since losing his position as the San Francisco 49ers quarterback, allegedly due to standing up against the police brutality against people of color. Using civil disobedience to get his point across, he kneeled during the National Anthem at the beginning of football games, causing a stir in the politics of the NFL altogether.

Since his departure, the former football star had become Time's Citizen of the Year for his stance on Freedom of Speech, and even selling out his Kaepernik shirt that he'd sold in partnership with Nike, distribute one to supporters in mere hours of the shirt's launch.

Now that Levine has sported the same brand that was perceived to be backing Kaepernik, fans of both the athlete and performer are at a standstill.

Only minutes after the band's performance, Levine made his awareness known in an Instagram post to show his appreciation for both the opportunity to perform as well as the concern of his fans.

"When we accepted the responsibility to perform at the SBHTS, I took out my pen and just wrote. Some of the words that came to me in that moment eventually made their way onto the incredible lanterns that flew high and low tonight. We thank the universe for this historic opportunity to play on the world’s biggest stage. We thank our fans for making our dreams possible. And we thank our critics for always pushing us to do better. One Love. ❤️ And the list of words is...Forgive, Laugh, Cry, Smile, Share, Live, Endure, Embrace, Remember, Enlighten, Preserve, Inspire, Sweat, Fight, Express, Give, Receive, Elevate, Climb, Unify, Fortify, Soften, Dance, Scream, Dream, Educate, Provide, Inhale, Exhale, Persevere, Stand, Kneel, Overcome, Love, Listen."

Nike has yet to respond to the perceived conflict.