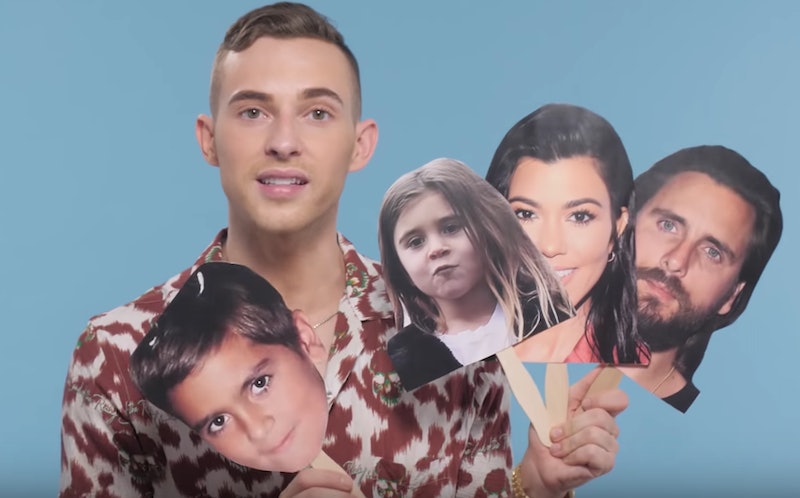 The Kardashian family — it's a complicated family tree, with new branches sprouting out all the time, but if you want to understand it, look no further than Adam Rippon explaining the Kardashian-Jenner Family History. Or, as he calls it, the Kardashian-Jenner-Webster Family History, because with little Stormi Webster in the world, Travis Scott — real name Jacques Webster — is a part of this family now too. (Remember what we said about new branches cropping up all the time?)

The Olympic skater sat down with Cosmopolitan for their "Adam Rippon Riffs On" series, where the 28-year-old brings his trademark quick wit to all things pop culture. This time around the topic was America's foremost reality family, starting with the late Robert Kardashian defending O.J. Simpson, putting the family on the map, and stretching all the way up to today, with Kylie Jenner and her Lip Kit fortune.

Phew! Even moving quickly to fit into a six-minute-and-change video, that's a lot to cover, but Rippon is up to it. He takes his job seriously, and he explained why to Cosmo's cameras:

"While we don't have a royal family here in the United States of America, we have basically adopted the Kardashians. And I'm here to go over the Kardashian-Jenner-Webster Dynasty."

This reality family is our version of royalty, and Rippon is treating them accordingly. He's stocked himself up with cardboard cutouts of all the major players. (Or most of the major players, but we'll get to that in just a second.) Because you can love or hate the Kardashians, but what you can't do is ignore them, so you might as well stay educated.

The Olympian takes viewers through the twisted pathways of this rapidly-expanding family, touching on everything from Kendall Jenner's "soda drama," Khloé Kardashian's quickie marriage to Lamar Odom, and Kim Kardashian's past as Paris Hilton's assistant. But ultimately there are now dozens of family members and family-adjacent members, so do some things slip through the cracks? Absolutely.

Does he forget Dream Kardashian? Yup, he for sure does, and we must ensure that she reaches adulthood without ever finding out that Jonathan Cheban got a cut-out while she didn't. Did he have to verify with the off-camera producers that Kim and Kanye West have just three children? Yes he certainly did. Does Rippon leave Younes Bendjima — Kourtney Kardashian's boyfriend of almost two years — out of the narrative, while including Kylie Jenner's ex-boyfriend Tyga? Uh-huh, but it could be because, like all of us, Rippon finds himself fascinated by the walking enigma that is Scott Disick. As he tells the camera: "I like Scott, but I also hate Scott at the same time. He's troubled, but he's so fun. But also, I'm troubled, and I'm so fun."

And finally, does he get the birth order of Kourtney and Scott Disick's children slightly out of order? Yes, but only because he's likely using that part of his brain for something more useful like skating knowledge. (To his credit, he also gushes over how cute they are.)

At the end of the day, Rippon's take on this dynasty is the only family history you need. The small nitpicking things that it misses in accuracy are more than made up for by his hilarious, deadpan delivery. And, who knows, maybe one day Rippon and the Kardashians will come together IRL to create a slightly more accurate family history.