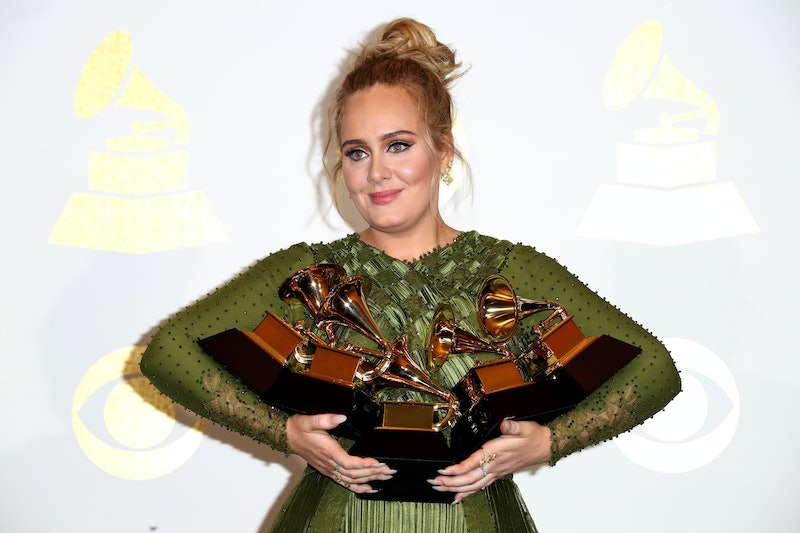 Sunday marked Adele's 31st birthday, and the 15-time Grammy winner celebrated with a heartfelt post about what she learned during her 30th year of life. But fans are dwelling on a very specific sentence in the singer's lengthy Instagram caption: Adele might have teased new music in her birthday post. And if she did, it was in a totally sneaky way.

Adele's full caption is moving and honest, and it's worth a read in full. But here's the line that has people convinced she's working on a new album: "Bunch of f*cking savages, 30 will be a drum n bass record to spite you." Fans of the singer know that her three studio albums — 19, 21, and 25 — take their names from her age. So, if Adele were working on new music about everything that's happened to her in the past year, it would make sense that her next album would be called 30.

But whether or not the singer is actively working on a "drum n bass record" — and whether her next album will be called 30 at all — is still up for debate. Considering that the rest of her caption is about her personal journey and "learning to REALLY truly love yourself," she could have just been having a bit of fun with the talk of a new album.

Another clue that the singer might just be messing with fans, though, is the fact that she said in 2015 that she didn't want to keep naming albums after her age, per Billboard. Of course, that was several years ago, so things could have changed since then — but it's also a reminder not to take her Instagram post too seriously.

"I feel like the idea of calling albums after my age is showing a photograph almost of what's going on in my life then and there," Adele told radio station Beats1 at the time. "I feel like not that much is going to change profoundly in me from now on in terms of how important eras of my life are to myself. So I think the next one will probably be called Adele."

There has been one big change to Adele's personal life since her last record, though. Adele and her husband Simon Konecki announced their split in April. And her birthday Instagram post could allude to that, with the singer writing, "31 is going to be a big ol' year and I'm going to spend it all on myself."

Things haven't been the easiest for Adele in the past year, but she's doing what's best for herself. And if she does make a record called 30, it sounds like there's a lot for her to draw on. Whatever's next for the singer, she has her fans' full support.