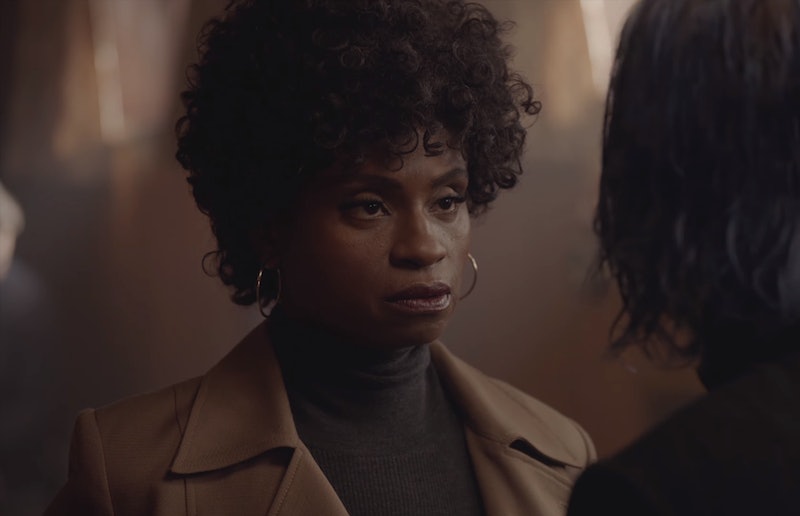 The eighth season of American Horror Story is already shaping up to be the most exciting installment yet. AHS: Apocalypse will be a crossover season between the worlds of Murder House and Coven, and plenty of familiar faces are returning to the Ryan Murphy series. Adina Porter's AHS: Apocalypse character sounds almost unrecognizable, based on the actor's recent comments to Gold Derby. And that's not a bad thing.

In the Gold Derby interview, Porter discussed her first Emmy nomination. She's nominated in the Best Supporting Actress in a Limited Series or Television Movie category for her performance in the seventh AHS season, American Horror Story: Cult. During that season, Porter played journalist — and murderous cult member — Beverly Hope. It sounds like she found out the exciting news about the nomination in the perfect spot, too. Porter revealed that she was in a makeup trailer for AHS: Apocalypse when she heard the news. Apparently, her co-star Leslie Grossman was the one who first told Porter she'd been nominated.

"I'm just going to say that it's an opportunity for me to yet again show another side, and, yeah, maybe a side that I've never shown before. And I thought, because of 'The 100' and 'Apocalypse,' that I knew everything about what life after an apocalypse would be, but Ryan Murphy and the writers of 'American Horror Story' have shown a whole other side of an apocalypse. So, I think people will be surprised and intrigued. And yet again, I'm being blown away by the performances that I'm seeing from my fellow cast members."

In addition to her role as Beverly in AHS: Cult, Porter has also appeared in AHS: Roanoke and Murder House. Her Roanoke character, Lee, was sister to Matt, who lived in the haunted North Carolina house. Lee's storyline focused on her relationship with her daughter, Flora, who made friends with one of the ghost children living at the haunted property. In Murder House, Porter appeared in one episode as a patient of Ben's. (Based on Porter's comments to Gold Derby, though, it doesn't sound like she'll be playing the same role as she did in the first AHS season.)

While the general plot of AHS: Apocalypse is still unclear at this point, there are a few key characters who've already been confirmed for the new season. Actor Cody Fern will play Michael Langdon, Tate's murderous son from the end of Murder House. Jessica Lange is also returning as Constance, who happens to be Michael's grandmother.

Coven actors Taissa Farmiga, Emma Roberts, Gabourey Sidibe, Lily Rabe, Frances Conroy, and Stevie Nicks (yes, really) will all be in the crossover season, too, though fans don't know all of their roles just yet. And, of course, AHS veterans Sarah Paulson and Evan Peters will be back too, as will Kathy Bates, Billy Eichner, Cheyenne Jackson, and Billie Lourd.

With all of the star power behind it, this might just be the best AHS season yet — and it definitely sounds like one that fans of Porter won't want to miss.