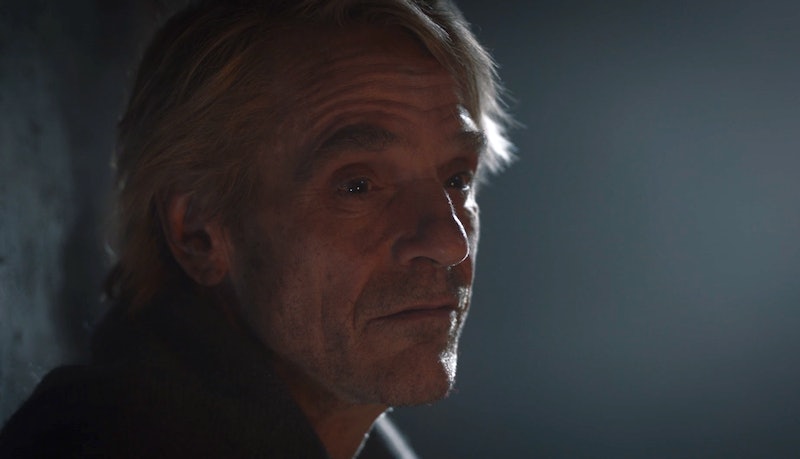 Spoilers ahead for Watchmen Episode 8. Dr. Manhattan and Angela's love story took center stage during "A God Walks into Abar," but Watchmen couldn't let the episode go by without a trip to Europa. The Watchmen Episode 8 post-credit scene had Adrian Veidt attempting to escape his prison on the Jupiter moon using a horseshoe that was baked into his anniversary cake. Because, as he told the Game Warden, Dr. Manhattan's utopia doesn't need him. Instead, Ozymandias has big plans to return to his eight billion children on his home planet of Earth and leave the manor — and the Mr. Phillips and Ms. Crookshanks clones — behind.

The post-credits scene began only with the audio of the clones smashing tomatoes in Veidt's face while he continuously told him that he would not stay with them on Europa. Watchmen creator Damon Lindelof told Collider that each time the audience see Veidt as the Lord of the Manor, another year on Europa has passed. He received his seventh-anniversary cake in prison by the Game Warden (Doctor Manhattan's version of Adam) in the post-credits scene, making his storyline in the year 2016. The main theory is that Veidt's escape plan from Europa will be completed by 2019, but his trip back to Earth may not be as freeing as Veidt expects.

The tool Veidt is using to dig out of his jail cell has been referenced twice before in his scenes on Europa. In the pilot, a Mr. Phillips clone gave Veidt a horseshoe to cut his cake. In Episode 4, Veidt yelled at a dead clone holding a horseshoe, saying, "I don't need it yet." Based on that response, perhaps the past, present, and future-seeing Dr. Manhattan had given Veidt a clue that if he ever wanted to leave Europa, a horseshoe would come into play. That might mean that Veidt is important when it comes to saving Dr. Manhattan from being destroyed by the 7th Kalvary, even if Ozymandias doesn't realize it yet.

Also in the fourth episode, Lady Trieu convinced the Clarks to give up their 40-acre farm. Interestingly enough, the book that Katy Clark is reading when she's first shown is Fogdancing — the very same book that Veidt reads in his Europa prison. (The book only exists in the Watchmen universe and was written by Max Shea, who also wrote Tales of the Black Freighter which was featured in the original comic books.) After Trieu secured their land, a meteor crashed onto the farm and Trieu claimed, "That is mine." It seems likely that the meteor was not a rock from space, but instead something that contained Adrian Veidt coming back to Earth.

Trieu and Veidt's relationship is unknown, but fans believe (like Seebooster on Reddit) that Veidt's "little elephant" comment to Doctor Manhattan in 2009 during Episode 8 was about Trieu. Years later, Veidt had sent a help message from Europa where he wrote, "Save Me D—." While he could have been writing to Dr. Manhattan, others believe he was trying to contact Trieu. Considering Veidt was the one who gave Dr. Manhattan the technology that made him lose his memory, Veidt probably wouldn't have relied on him to help. So Trieu with her space probes could have been the intended recipient of his SOS. As for the "D" part of his message, one theory is that Veidt is Trieu's father with Reddit user FranklinBluth believing Veidt was writing, "Save Me Daughter."

Veidt and Trieu's names are quite similar. But no matter the nature of their relationship, it does seem plausible that Trieu is who will help Veidt escape Europa. Yet, Trieu's gold statue of Veidt in her Tulsa vivarium seems quite suspicious and could possibly contain Veidt inside. That would explain why Veidt hasn't been spotted in Oklahoma if he somehow had made it back to Earth.

Some fans believe that Veidt could turn out to be the main villain of the TV series like he was in the comics with gazelleflb on Reddit wondering if Veidt helped the 7th Kalvary find Dr. Manhattan. But perhaps Ozymandias will help Dr. Manhattan escape his fate if he is indeed on Earth in the year 2019. First, though, Veidt will have to leave Europa. Phillips and Crookshanks won't want to let him go without a fight with the Game Warden and Mr. Phillips actor Tom Mison telling The Hollywood Reporter, "You will see me in the finale." So Ozymandias will probably betray his worshippers one last time before he can return to his home.