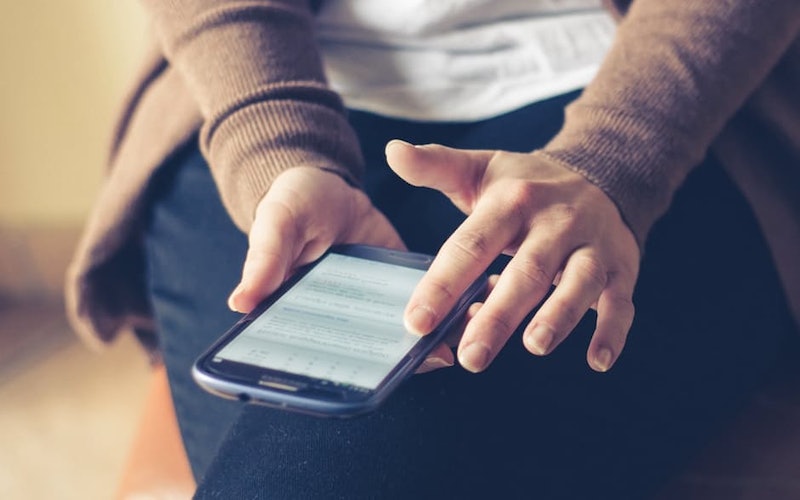 Even tweets sent out with the best intentions can sometimes be problematic as heck, as one Twitter user learned on Monday. Latrell Phillips, a 21-year-old Atlanta, Georgia resident, tweeted something that women hear fairly often when navigating the complicated world of dating, advising that women just give men fake numbers if they're not interested in them. After the tweet went viral, many users tweeted at Latrell and explained why, despite the supposed simplicity of the suggestion, that advice was not only inappropriate, actually put a lot of women in compromising situations.

The initial tweet read, "Give a fake number. Stop giving people your line if you're not interested in them. Doesn't make sense." Of course, it's always an issue when men dictate how women should behave in situations like this, particularly ones that concern their personal safety and wellbeing. Rather than dictating how women should reject men — a sentiment that smacks of women being complicit to men, by "letting them down easy" rather than being vocal and honest about their disinterest — we should be reminding men of the appropriate reactions to rejection. Reactions that, unfortunately, are a source of fear for many women, and the reason why the whole "giving a fake number" gag exists.

But misogynistic notions aside, on a practical level, giving a fake number in, say, 1997 is a lot different from giving a fake number now. Within minutes, the tweet had garnered responses from women who explained not just the possible consequences of doing this, but the very real ones that they'd experienced — and though their stories ranged from creepy to harrowing, they were all, unfortunately, not at all difficult to imagine for any woman who has found herself in this situation before.

The first thing women were quick to point out, from a practical level, was that many men stick around to make sure women have given them a real number by calling it in front of them.

Others cited how men's reactions to rejection are where the heart of the issue is, rather than how women decided to reject them; all too often women find themselves in "lose-lose" scenarios, where they are forced to decide whether to reject someone, or feign interest for their own safety. Of course, giving a fake number is far from the only problematic move women have been told to use to deter unwanted interest — it is in the same vein of lying about having a boyfriend, or claiming to be a different sexuality than the person pursuing them, all in the interest of implying that "ownership" of them lies elsewhere, and that outright rejection is not the reason to blame.

BuzzFeed News spoke to Phillips in light of the attention the tweet had been getting, particularly in regards to the stories women were sharing about men calling the numbers they provided. "Men should accept rejection and move on," Phillips said to BuzzFeed News. When asked if he would consider advising men on how to handle rejection rather than making it the responsibility of women, he answered, "Yes, I would — I learned to be careful with how you say things because it can be perceived the wrong way."

As unfortunate as the message in Phillips' tweet was, it did help to open up yet another forum for an ongoing conversation — a conversation in which we need to stop letting women believe it is their responsibility to, and start teaching men the appropriate reactions to rejection. And given the recent violent crimes in the news — both the elementary school shooting in San Bernardino last week and the Facebook video shooting on Easter Sunday were allegedly conducted by men who resorted to violence after perceiving rejection from a woman — this shift in the dialogue surrounding rejection cannot come soon enough.

Fortunately, at the end of this Twitter snafu, Phillips was in agreement with at least that: "People have to accept no. And move on," he told BuzzFeed News. There's billions of people in the world. You should never harass anyone because they don't want you."