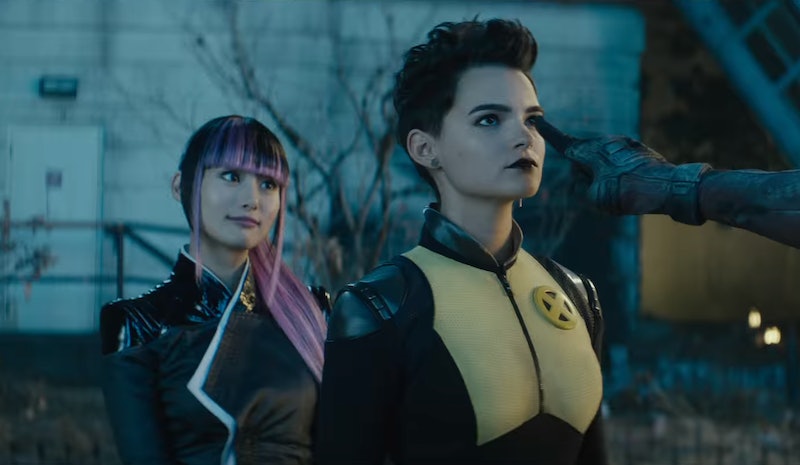 Yukio of Deadpool 2 is a character surrounded by mystery. From what her powers are to what her relationship to the X-Men is, nearly everything about the mutant is left unknown. Yukio doesn't really seem to have a life outside of being one half of the first gay superhero couple onscreen (nothing to sneeze at, of course), nor does she have a personality that goes beyond typical depictions of a cute Japanese anime character. And unfortunately, just like X-Men: Apocalypse's Jubilee before her, Yukio is just one of several Asian women in the Marvel universe who falls into that stereotype.

Small spoilers for Deadpool 2 ahead. When the Deadpool 2 audience first meets Yukio, she is introduced as Negasonic Teenage Warhead's girlfriend, which, while exciting for LGBTQ+ representation, means that she pretty much just exists in Negasonic's shadow. In her first couple of scenes (and she only appears in a handful overall), Yukio is shown solely as a cute Japanese girl who smiles all the time and gives little waves, a stereotype that can be traced back to the fetish for "cute, naive, and girlish" Japanese women that was common in the '50s and '60s, as noted in Alma M. Garcia's 2012 book Contested Images. Yukio is more seen than heard, and when audiences do hear her, it's really only to say hello and goodbye to Deadpool. (Actor Shioli Kutsuna even told The Nerds of Color that should she return to the role, she'd "like to see [Yukio] talk more.")

Yukio's identity as a Japanese stereotype brought to life is only amplified by the lack of specificity regarding her superhero identity. (Deadpool 2 writer Rhett Reese recently confirmed to CBR that, despite a popular fan theory, Yukio is not Surge from the comics.) Her mutant powers — she's able to electrically charge a large chain weapon she wields like a whip — are saved until the film's last big battle and are only seen briefly; the majority of the movie's action scenes focus instead on Colossus, Cable, and Deadpool.

As a supporting character, it's normal that Yukio isn't as fully fleshed out as the stars, of course. But Marvel has a history of sticking its female Asian characters in stereotypes or ignoring them completely. In 2016's X-Men: Apocalypse, for instance, the Asian female characters consist of a woman whose sole characteristic is her sword-fighting (Psylocke), and a another who has few scenes and zero lines (Jubilee). Admittedly, Yukio is a step up from both — her relationship with Negasonic shows she has a life off the battlefield — but that's not exactly saying much.

Outside of the X-Men franchise, the Marvel Cinematic Universe has seen two other Asian women who've felt flat. Avengers: Age of Ultron featured a minor character named Dr. Helen Cho, a brilliant doctor from Korea who fell into the Asian scientist stereotype. Although she was vital to saving Hawkeye's life and creating Vision, she received little credit for either and has not reappeared in the MCU since. Then there's Mantis, introduced in Guardians of the Galaxy Vol. 2 and most recently seen in Avengers: Infinity War. Mantis is an alien, but she's played by Korean-French actor Pom Klementieff, and her accent and other-worldly nature fit into the "other" stereotype often ascribed to Asian characters. Her high-pitched, airy tone and over-enthusiastic demeanor are, in many ways, equivalent to Yukio's cheerful greetings.

It is commendable that Marvel has made significant attempts at portraying Asian women as superheroes, but none of those characters (with the exception of Mantis in some scenes) have come close to having the same impact on a franchise as their white counterparts. Achieving surface-level representation is half the battle, but Marvel needs to commit to bringing an Asian female superhero to the big screen who offers more than just a cheap laugh (Mantis), fighting skills (Psylocke), a mute best friend figure (Jubilee), or a cute smile (Yukio).

Asian men in Marvel movies don't have it much better. Sorcerer Wong (Benedict Wong), introduced in Doctor Strange, disappeared after the first act of Infinity War, and his absence was so noticeable it became a meme.

Peter Parker's BFF Ned in Spider-Man: Homecoming, meanwhile, is a great supporting character who adds plenty of humor to the movie, but a supporting character nonetheless. And in Deadpool 2, Russell, played by Maori actor Julian Dennison, has a huge role, while Dopinder, the South Asian cab driver, is a major presence. However, film's new East Asian superhero Shatterstar is unceremoniously killed in his second scene.

But there is one corner of the Marvel universe that gets Asian representation (mostly) right. Marvel Studios' TV shows have consistently portrayed genuinely complex Asian characters. Agents of S.H.I.E.L.D., for example, has not one, but two Asian female leads (Ming-Na Wen and Chloe Bennet) who have had full storylines, intense action scenes, and complex character arcs over five seasons. Over on Netflix, both Daredevil and Iron Fist have featured three-dimensional Asian characters with Elektra and Colleen, respectively. (Although it's worth noting that those shows have other problems when it comes to whitewashing Asian culture, most notably because of Iron Fist.) Most recently, Hulu's Runaways introduced Nico Minoru, a hero who's just as involved in the show's plot as any of her white peers.

There's hope on the horizon for Marvel's movies to follow suit; Captain Marvel has cast Gemma Chan as Kree spy Minn-Erva opposite the MCU's first leading female superhero, Carol Danvers (Brie Larson). And it's likely that the character of Mantis will continue to grow in the third Guardians movie, as well as 2019's Avengers 4. As for Yukio, there's a chance she could appear in the planned X-Force movie, and Deadpool 2 writer Reese has expressed interest in developing her character, telling CBR, "I really think we have to do her more justice going forward."

All in all, Marvel has laid down a decent foundation from which to build substantial Asian female characters. Now the studio just has to let these heroes harness their powers to follow through on that promise.