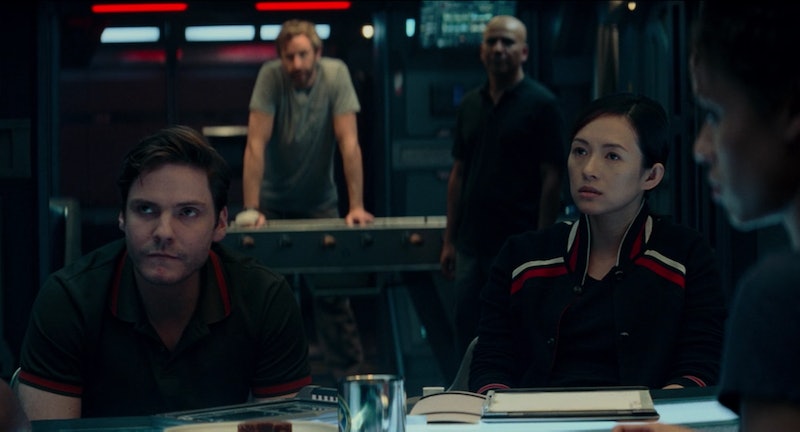 Spoilers ahead. The Cloverfield Paradox is, essentially, about a group of astronauts working on the Cloverfield Space Station. There, they try to get the Shepard particle accelerator, the largest ever built, to work to create an unlimited supply of energy. Back on Earth, an oil crisis has lead to international turmoil and left it on the brink of another world war. Though it is not shown in the film, it's clear that a coalition of countries — Russia, Germany, the U.K., Ireland, China, Brazil, and the U.S. — banded together to make the Cloverfield Space Station, and as such, each nation is represented on the ship's crew. Obviously, they don't all have the same native language, but, like most American productions, the movie solves that problem by having every character speak English. Every character, that is, except for Tam, the Chinese engineer (Ziyi Zhang).

Throughout the film, Tam speaks Mandarin to her fellow crew members, and the entire group frequently carries on bilingual conversation. It's also clear that Tam understands English just as the other crew members understand Chinese. The ship's AI system also seems to understand Chinese and technology on the ship features Mandarin writing, suggesting that the ship is likely heavily developed and financed by China. So it's logical that all the crew members would speak Chinese. It's even revolutionary in Hollywood, which tends to avoid foreign languages and subtitles at all costs, but chooses to use them frequently in The Cloverfield Paradox.

What's not logical or revolutionary is that Tam never speaks English, even when outnumbered in large group discussions. (And this is despite the fact that Ziyi Zhang can speak English and has acted in English before.) What's more, the other non-native English speakers rarely speak in their native language — no German, no Russian, no Portuguese.

By making Tam the only person who doesn't speak English on the space station, The Cloverfield Paradox sets her apart from her fellow crew members and puts a barrier between her and the English-speaking audience (this is an American movie, after all). Worse, not all of Tam's lines are subtitled, meaning she is the only person the audience doesn't fully understand.

Choosing when to include subtitles is an artistic choice, one that supports a global reality where one shouldn't expect English to be the norm. The fact that neither Tam nor the other crew members has or needs a translator establishes the Cloverfield Space Station as a kind of bilingual zone where both Mandarin and English are universal standards. However, Tam is still alienated to the audience because she is the only character that requires subtitles, and even then, doesn't always get them.

If Hollywood were different, and Asian representation in American media were better, then perhaps this wouldn't be so glaring. But the reality is that only roughly one percent of lead roles in Hollywood films go to Asian actors, according to the USC Annenberg School for Communication and Journalism. And anybody who has seen a movie or television show with Asian characters should be familiar with the "Fresh Off The Boat" stereotype — the Asian foreigner. In America, it's common to view Asians and Asians American as other, as foreign, as separate. And that's a stereotype that The Cloverfield Paradox unfortunately only helps enforce.

More like this
The Biggest Differences Between 'Bullet Train' & The Book It’s Based On
By Arya Roshanian
What's New On Netflix: A Third '365 Days' Movie & Lili Reinhart’s New Film
By Arya Roshanian
Twitter Is At Odds Over Taylor Swift’s Possible ‘All Too Well’ Oscar Run
By Brad Witter
Revisit 1992’s 'A League Of Their Own Cast' Photos After The New TV Series
By Grace Wehniainen
Get Even More From Bustle — Sign Up For The Newsletter