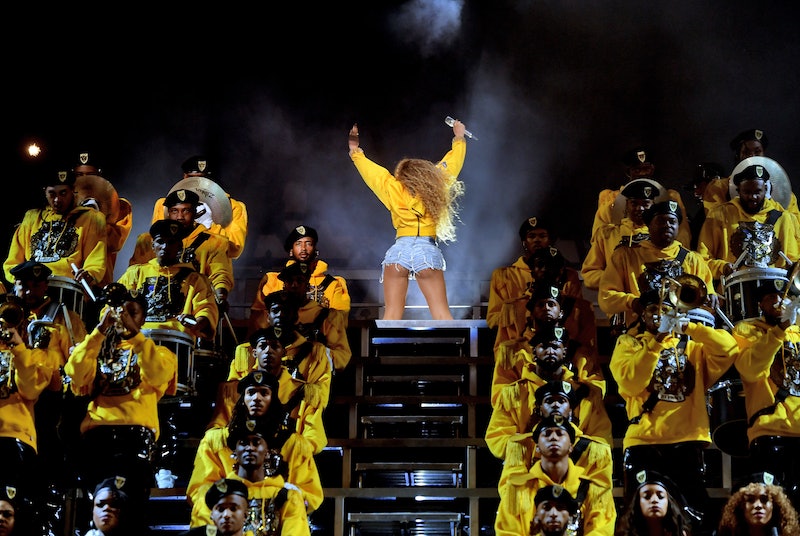 This week Netflix dropped a new trailer for Beyonce's documentary Homecoming. The new documentary Homecoming: A Film By Beyoncé, will be released on Netflix on April 17 giving a behind-the-scenes insight into Beyoncé's headline Coachella performance back in 2018. After cancelling the previous year because of her pregnancy, the "Single Ladies" singer gave one of the most memorable performances of her career.

For anyone who watched the Coachella performance, the university motif in Beyoncé's performance was pretty obvious. She had a beehive-yellow hoodie on with Greek letters, similar to those seen in sorority and fraternity houses in America. And of course, who can't forget the giant marching band and majorettes on the bleachers. But Beyoncé wasn't selling an-all American dream — her performance was specifically bringing the culture of historically black colleges and universities (HBCUs) to centre stage. Fans alike hope this will be explored in the upcoming documentary.

Shockingly, Beyoncé was the first black woman to ever headline Coachella, a festival that has been running for almost 20 years. So she made sure her moment counted, lacing the nearly 2 hour set with black history. Beyoncé used lots of key black culture references in her performance, like wearing an Ancient Egyptian Nefertiti inspired outfit, enlisting the help of the best HBCU marching bands and rocking the raised fists symbol of the Black Panther party on another look. But it seems that most of Beychella's inspiration came from life at HBCUs.

When you think marching bands in the UK, a pretty boring, regimented style of marching comes to mind — but not at Beychella. This marching band had high tempo dancing, high kicks, and dropped it low all whilst playing instruments. But this style isn't specific to Beyonce's show — this is what marching bands are like in HBCUs. Known as "Show Band" style, it separates itself from other forms of marching because the bands often perform to Hip-hop, Jazz and R&B with high-tempo choreography

Historically, black Colleges and Universities have existed since before the American Civil War. They started in southern states because white universities prohibited black students from attending their universities. With roots in the military, marching bands have had a long standing history in HBCUs.

A 2018 documentary on Netflix, called Marching Orders, is a perfect insight into HBCUs and marching band culture. The 12 part docu-series follows Bethune-Cookman University's marching band and dancing troupe as they prepare for a competition. The film Drumline (starring Nick Cannon and Zoe Saldana) also popularised marching bands to those who didn't know about this specific style.

Beyoncé paid homage to HBCUs throughout Coachella especially in the style of dancing. "J-setting" was a critical part of Beyoncé's performance, and it's the style of dancing you see in Single Ladies. J-setting originated in queer communities and was subsequently popularised by the Prancing J-Settes, the all women dance team from the HBCU, Jackson State University. The Coachella performance also had a lot of "stepping," an art form historically popular in HBCUs, with its roots in military drill formations and African dances.

Clearly, playing homage to black excellence is really important to Beyoncé — she even started a Homecoming Scholarship programme for HBCUs. Hopefully Beyoncé's new documentary will be an insight into HBCUs, the marching bands she performed with, and her thought process for the killer show. This could be a great opportunity for audiences to find out more about the history of black marching bands and African American culture through HBCUs.