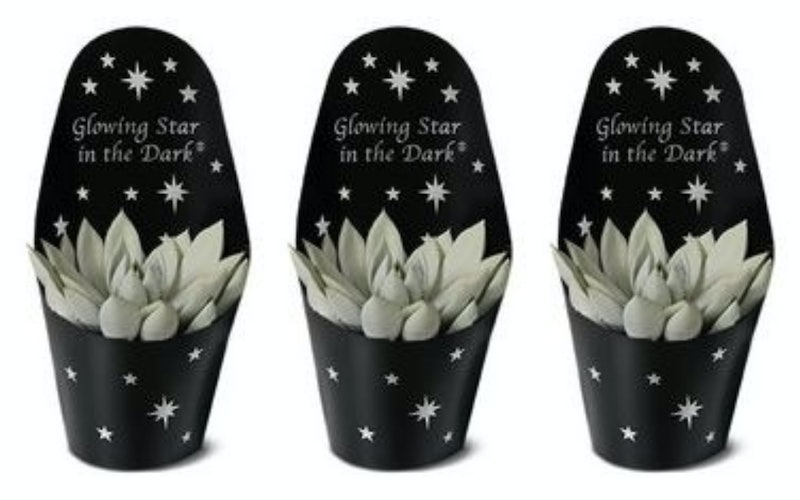 In today's edition of a hare-brained millennial dream made real, I offer you the most on-trend Halloween decor I've ever seen with my beady eyes. No, not a skeleton made of pumpkin spice lattes. No, not a jack-o-lantern burning nothing but your student loans inside. Today, I'm offering you a plant, a dream, a photo opportunity — a glow-in-the-dark succulent from Aldi. That's right, Halloween and succulents come together in one beautiful, glowing little bundle. Even better? They are called, aptly, the Glowing Succulent, and they're only $5.99.

I'm not a huge succulent person because I am too distinctly uncool, but I am a lazy person — so the idea of a houseplant that can also make me Halloween-ready in a flash has definite appeal. If only they were made of candy I'd probably already own 45 of them. According to House Beautiful, this type of plant can glow in the dark because of a special coating put on them while they're still in the nursery — they store up energy when exposed to light so they can glow later on. They're basically like the adult version of those glow-in-the-dark stars you would stick on your ceiling when you were a kid and wanted to feel emo and sophisticated — and I think a lot of people will show up for that.

Now, these little buggers are only around for a limited time and they are getting some pretty strong Instagram love already, so you might want to check out selected Aldi locations post haste if you'd like to get your hands on them. Instagrammer @agpriceflorist has shown what they can do.

Of course, if you get really into the Halloween spirit then there's a good chance you'll be all about that glow-in-the-dark vibe — far beyond just succulents. Luckily, this time of year is a bit of a glowing extravaganza. Even Bacardí has a glow-in-the-dark bottle for Halloween. Or you can light up with your home with some slightly cute, slightly terrifying Jack Skellington lights to complete the ghostly glow. (In fact, it's a bit of a Nightmare Before Christmas extravaganza this year, with lines at Hot Topic and even Build-A-Bear.) Basically, if you want to give an eerie twist to your Halloween celebrations, there are a lot of ways to do it.

But none of them are quite as on-trend as a glow-in-the-dark succulent. Luckily, if you have a bit of a black thumb like me, succulents are one of the easiest plants to take care of — so you can get that glow for Halloween, but keep it going long after. Aldi has wormed its way into our millennial hearts and living rooms with these Insta-bait beauties — and we crawl into their awaiting arms.