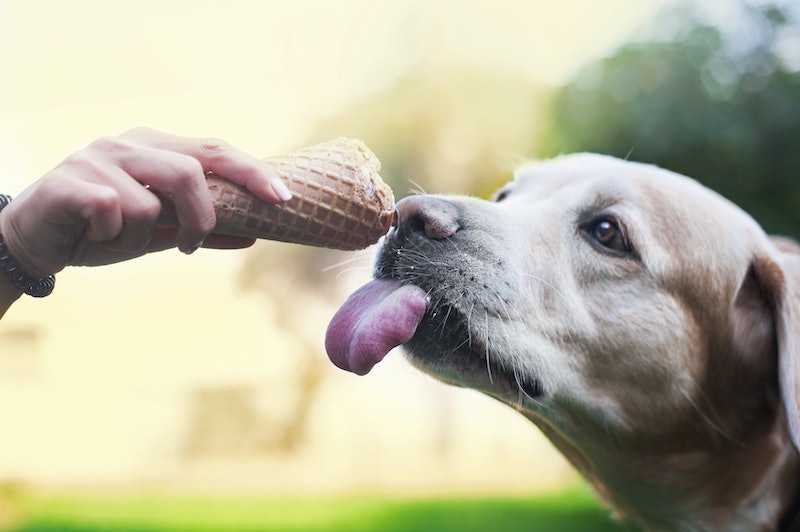 One of the best parts of summer is undoubtedly cooling off with a frozen treat — and now, your pets can partake in the deliciousness, too: Aldi is releasing ice cream for dogs, reports Delish. Part of the Heart To Tail label, the “Frozen Dog Treats,” as they’re called, will hit Aldi stores in the United States on June 26 under the Aldi Finds section of the store. You’ll have to act fast, though, because once they arrive, you’ll only have a limited time to stock up on them for your favorite animal pal.

Heart To Tail is Aldi’s pet brand; originally filed for trademark in 2016, it includes everything from beds and other supplies to food and treats for your furriest of friends. In fact, there are currently two Heart To Tail products available in the Aldi Finds list for June 5 to June 11: The Heart To Tail Travel Pet Bed and the Heart To Tail Protection Cover. (Both items are meant to make your dog’s time in the car a little safer and more comfortable.)

In just a few weeks, the Frozen Dog Treats will become the latest addition to the Heart To Tail line. Technically, it’s not actually ice cream; rather, the packaging describes it as an “ice cream style treat for dogs” (emphasis mine). But let’s face it: Functionally, it’s ice cream for your pupper, with each package containing four tubs of the stuff — two in the Original flavor and two in the Cheese & Bac’n flavor. For what it’s worth, it’s not totally clear what Original actually tastes like; pet-centric website Dog O Day postulates that it might resemble a classic dog biscuit kind of flavor, although that’s pure speculation at this point. Either way, though, your pet is sure to enjoy the treat, especially in the heat of the summer. (It’s gluten-free and contains no artificial ingredients, too.) The Heart To Tail Frozen Dog Treats will retail for around $3 a package, according to Delish.

However, there’s a catch: Because the “ice cream” will be released as an Aldi Find, it will only be available for a limited time — and possibly only in limited locations. The Aldi Finds products are special offerings introduced weekly, typically on Wednesdays, which can only be snagged while they’re available. Once the stock is gone, it’s gone — and there’s never any guarantee that the products filed under the heading of Aldi Finds will come back again later.

Why not increase the stock if demand is high enough? Because the store can’t always predict which products will actually have a high enough demand. Explains the Aldi FAQ:

“Aldi Finds are ordered months in advance and are intended to be on sale for a limited time. With new Aldi Finds coming in every week, we have to sell them quickly to make room for the next exciting offers. Unfortunately, it is not always possible to predict which items will sell out faster, but we do our best to supply each store with sufficient stock of each product.”

So, alas, until it’s actually possible to see accurately into the future, Aldi Finds will remain an unpredictable beast.

Sometimes, though, if a product does well enough during its first run, it might get brought back later on — or even improved upon. Take, for example, the bottled mimosas Aldi sold during the warmer months of 2018: They quickly went viral that year — and in 2019, several more varieties arrived: A Pineapple Mimosa in the spring and a Mango Mimosa just recently. Both the pineapple and mango options were, notably, Aldi Finds.

You might, however, also be limited in your Aldi Finds selection based on where you happen to be located. According to the Aldi FAQ, Aldi Finds inventory “can vary by location”; as such, the company recommends checking the handbills for your nearest Aldi locations in order to find out what’s in stock, as well as “visiting Aldi as early as possible” when new items arrive on shelves.

In any event, we’ve got plenty of notice about the Heart To Tail Frozen Dog Treats; they won’t arrive in the Aldi Finds section until June 26. Keep checking the Aldi Finds page on the Aldi website for new deals in the meantime, though — and don’t forget to call up or swing by your friendly neighborhood Aldi’s for the doggy ice cream in a few weeks. Your pupper will thank you for it!