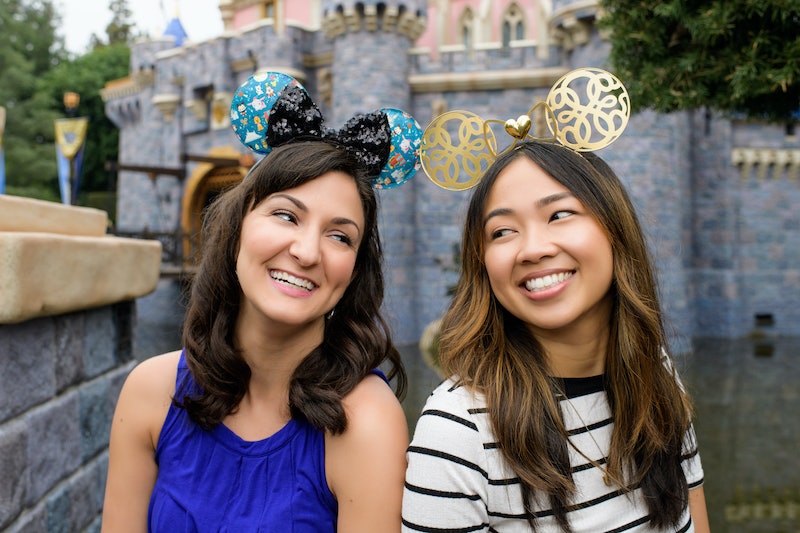 No matter your age, there's likely a little piece of you that will always have a fondness for Disney and its globally recognizable mascots Mickey and Minnie Mouse. For some, though, Disney is still a major part of their lives, and Alex & Ani's Mickey ears from the Disney Parks Designer Collection are going to be on their wishlist as soon as they see this golden and gorgeous high-end design.

If you aren't familiar with the Disney Parks Designer Collection, the classic animation studio teamed up with celebrities, designers, artists, and brands to create limited edition Mickey and Minnie Mouse ears for the Disney theme parks. The ears launched on May 24 with the first collaboration with Harvey's. Disney will be launching a new set of ears designed by a new collaborator from now until Summer 2020. Next up on the list is jewelry brand Alex and Ani.

The brand is known for its for creating jewelry with meaning to it. From self-care reminders to spiritually-centered pieces and even character driven styles, Alex & Ani creates jewelry that speaks to who its customers are. Now, the brand is working with Disney to create a pair of limited edition Mickey ears that are are golden, gorgeous, and have a special message.

The new Alex & Ani Disney ears features the classic Minnie Mouse bow and ears in a headband style with a comb to keep it in place as your explore the parks. In the center of the design, fans will find Minnie's iconic bow complete with a golden heart at its core. As for the ears themselves, they feature an intricate damask-like pattern that's also gold.

The brand, of course, had to put its special touch on the Disney ears. On either side of the band, there are quotes from Alex & Ani. One side reads, "Follow Your Path," while the other has "Listen With Your Heart" engraved. If those says sounds familiar, they're from Disney's classic animated film Pocahontas.

If you want to shop the new Alex & Ani Disney ears, the golden creations will be available beginning July 5, and yes, you can snag them outside of the parks. The ears will be sold online and the Shop Disney website, but of course, if you're heading to one of the Disney parks, they'll also be available there as well.

As for the price, the ears will retail for $178, and while that may seem steep, the design is certainly higher-end than the typical ears sold in the park and are created by a jewelry company. Plus, for Disney lovers, the ears are a limited edition product that won't be seen again.

If you want this luxe pair of Minnie Mouse Ears from Alex & Ani get ready to shop on July 5. Whether you want to keep them on display with the rest of your Disney good or have been on the hunt for the perfect ears for your next trip to the parks, the Alex & Ani Disney Parks Designer Collection ears may be the perfect ones for you.