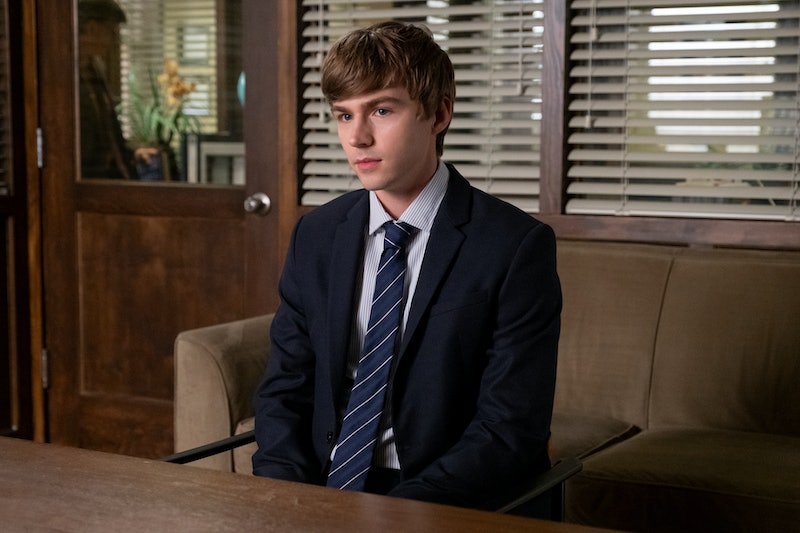 Spoilers for 13 Reasons Why Season 4, Episodes 1-9. Netflix's 13 Reasons Why is not what you would call an uplifting show. Tragedy and heartbreak are a core part of the story, and especially so in the fourth and final season, when everything comes to a head. Amidst Season 4’s murder investigations and police surveillance issues is a notable bright spot though: Alex and Charlie's relationship in 13 Reasons Why.

Given all the hot button issues that 13 Reasons Why broached each season, Alex's sexuality was a topic that sat on the back-burner for most of the show — with Alex not coming out until Season 4. Meanwhile, in Season 1 he was the toxically spurned boyfriend who published the "Hot List" just to torment Jessica and Hannah. After he attempted suicide, his storyline focused around recovery, atonement, and steroid misuse — and this was all before it was even revealed that he also killed Bryce and pinned it on Monty.

In Season 2 Alex grew close to Zach, and he popped an erection when the two got in a physical fight. (Alex was mortified, but Zach ever-so-kindly shrugged it off.) In Season 3, Bryce tried to force Alex to lose his virginity to a female sex worker, but Alex fled.

This all comes to a head in Season 4 when Winston (who had been romantically involved with Monty during Season 3) transfers to Liberty High. Winston's bold advances intrigue Alex, and despite Alex initially insisting he's not gay, the two go on a date and eventually make out. But Alex's first queer romance is cut short when he learns that Winston can provide an alibi for Monty, making him an actual antagonist to Alex.

So Alex breaks it off with Winston, which finally paves the way for Charlie. A relative newcomer, Charlie appeared in Season 3 and is actually a genuinely good guy. He stands up for women and lacks the same toxic machismo that the other jocks have, yet he's also a respected team captain and student. He even helps Clay and his friends frame Monty for Bryce's murder.

It's also clear early on that Charlie likes Alex. He appeared to express interest in Season 3 after Alex stood up at the HO Assembly, but Alex wasn't that receptive. Charlie is gently persistent though, and Alex becoming more open through Winston creates a window for Charlie to pursue him more earnestly.

And Charlie's wooing of Alex is incredibly sweet. He excitedly shares a bunk with Alex during the camping trip, and confides in Alex that he learned how to make pot cookies while he cared for his ailing mother. He comforts Alex during a panic attack, and even admits he googled TBI (traumatic brain injury) symptoms so he'd know how to care for him. When they finally kiss, Charlie is giddy, leading to an amusing scene where Charlie admits he assumes they're dating now because Alex is "the first actual guy who I've kissed who's kissed me back." Even Alex's attempts to push Charlie away fail, causing Alex to snap that Charlie is like a "f*cking golden retriever." They're eventually accepted into each other's families, and share a sweet love confession after winning prom king and king.

Charlie is one of 13 Reasons Why's most uplifting characters and his love for Alex is one of the purer things that have happened on the show. And in the midst of this season's trauma — their relationship was a welcomed bright spot.