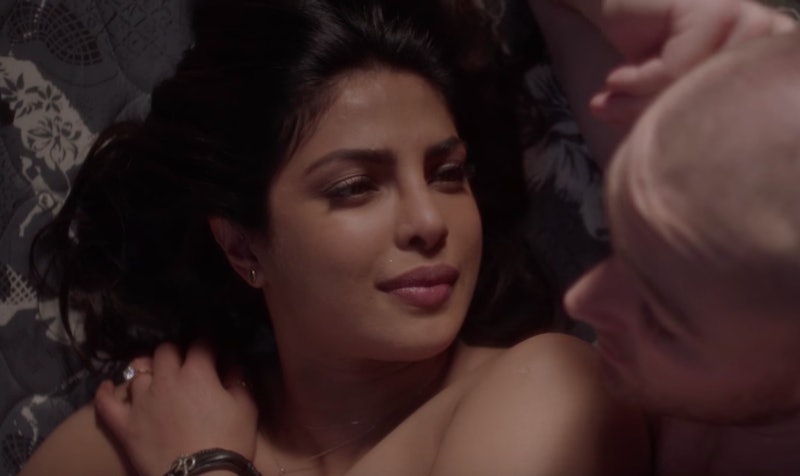 Quantico is finally back, and the spy drama is getting trickier by the second. The Quantico winter premiere, "Cleopatra," picked up where the mid-season finale left off: with Alex officially out of the FBI in the past timeline, and answering FBI questioning in the present. Sticking in the past timeline (aka, the Farm timeline, aka the pre-terrorist attack timeline), Alex got closer to Owen on Quantico in the hopes of finding out more about the AIC, but her one-woman mission is also leading her away from her new fiancé Ryan.

With her ties to the FBI officially cut, Alex is throwing herself completely into being the best damn CIA recruit she can be, while also investigating Owen and the AIC. And, lucky for her, the CIA lesson of the week is perfect for helping her get close to her mysterious instructor. The lesson: how to seduce a potential asset. With some prodding from Harry, who wants Alex to get close to Owen so she can help him with his own investigation (at least, that's what he wants her to think). Alex does her best to get close to an increasingly self-destructive Owen. And, at their big assignment, in which each recruit is given a mark to sleep with at a wedding (yes, really), Alex has the perfect opportunity to get intimate with her instructor.

After slipping him an unknown substance in his drink, per Harry's request, Alex accompanied a drunk Owen to his hotel room, where he confronted her about trying to seduce him. To his surprise, Alex refused his advances, telling him that she wasn't there to seduce him, but the fact that he thought so means that he wants her to. She left the room before the end of the night and failed her mission to sleep with her mark, so I think it's safe to say she did not sleep with him (though, this is Quantico, so, who knows?). Oh, also, fun fact about Owen: in the present timeline, it's revealed he's locked up in federal prison. Make of that what you will.

Ryan, however, did sleep with his mark. Not only that, he saw Alex slip out of Owen's room at the hotel. When the two lovebirds met up at their old FBI safehouse (no longer in use because of Alex's recent demotion), Ryan confronted her about investigating Owen and the AIC on her own, and admitted to her that he had been chosen to join the secret organization over her. "That's what I wanted you to believe," Alex said, producing a secret AIC phone of her own.

So, Alex was also recruited, but didn't tell her FBI handlers? Or was she recruited during her drunken talk with Owen? Or, is she fibbing completely? I guess we'll just have to wait and find out.