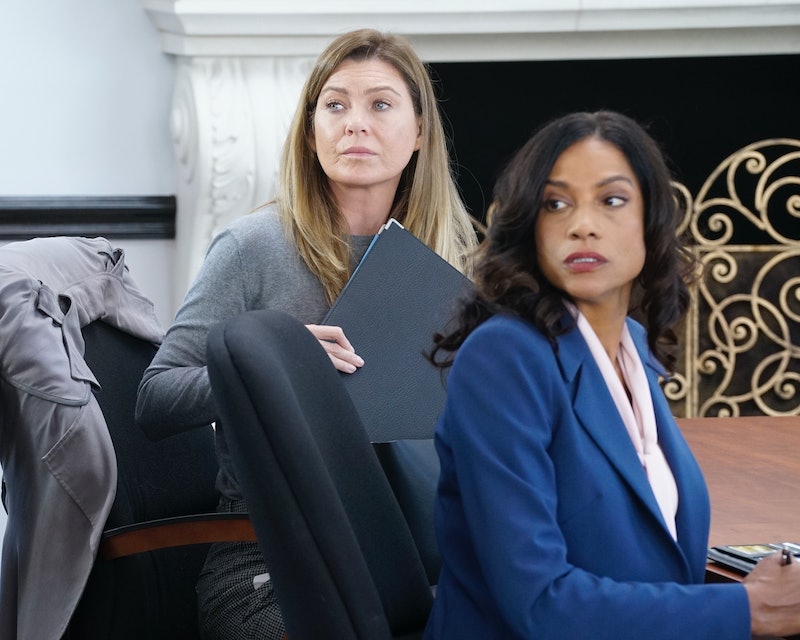 If there's one thing the Grey Sloan docs know, it's how to save a life. So when the prognosis wasn't looking so great during Meredith's medical board hearing on Grey's Anatomy's Thursday, Nov. 14 episode, "My Shot," the famed surgeon got a surprise assist from Karev in the form of an army of past patients acting as character witnesses. (Even Katie Bryce, aka the teen gymnast who was Mer's very first patient in Season 1, was among them.) The ABC medical drama's touching show of support was all part of the Grey's 350th episode walk down memory lane that included a testimonials from alumni like Callie, Arizona, April, Addison, and, yes, even Meredith's "person," Cristina.

Just as one would have hoped, Dr. Cristina Yang's letter on Meredith's behalf turned out to be very Cristina. Karev read the message in which the former Grey's surgeon began in self-deprecating fashion, describing herself as "selfish to a fault." That aside, she explained that, if she was dying, and "a surgery stood between me and death, Dr. Grey's hands are the only ones that I'd want inside my body." Cristina added that "taking away her license is signing the death certificates of countless future patients." She added that Meredith is "unstoppable" and a "light in a broken system," which, by the way, she said her friend will fix — whether the board likes it or not.

Before Bailey finally gave the rousing speech fans would expect from her, she had to redeem herself from her robotic testimony at the top of the hearing. Aside from confirming a litany of Meredith's past offenses — including her involvement in the infamous case of Denny's cut LVAD wire, shown in a series of nostalgic flashbacks — Bailey also claimed that she and Meredith had never grown close — despite the fact Meredith's son is literally named Bailey. After chastising Webber for lying in his testimony ("Meredith Grey could commit murder, and you'd hide the body," Bailey huffed), she realized there was more she could do and decided to speak again.

Bailey told the panel that ever since she first met Meredith, she "knew she was going to be a thorn in [her] side." Meredith's been a rule-breaker since day one, she said, but "no one should be questioning her license because she's too good at what she does." Bailey pointed out that with all that Meredith has survived, it hasn't made her hard, mean, cold, or not care. In fact, Bailey added, it made her "better than anyone in this room." That is, except for Bailey, of course, who hilariously concluded her statement with an emphatic "Dr. Miranda Bailey, Chief of Surgery at Grey Sloan Memorial Hospital, and I approve this message.")

Not all the ghosts of Grey's past were friendly ones, though. Meredith immediately recognized one of the panel members as the doctor who was responsible for Derek's death. After the man (who somehow didn't even remember the legendary Dr. Grey) insensitively grilled Alex about Zola's adoption, Meredith exploded during the hearing, calling him "the coward who stood over my dying husband." And, well, because it's Grey's, medical drama ensued when the man collapsed almost immediately afterward and began seizing. He may have eventually met the same fate as Derek in the end — but not because the Grey Sloan crew treated him any way other than to the best of their abilities. (Jumping to action, Meredith even suggested her former Grey Sloan colleagues perform the CT Scan he failed to order for her husband.)

There might have been some love lost along the way, though. The prosecuting attorney got Schmidt to publicly admit he's the one who ratted out Meredith, so things are about to super tense between him and his fellow interns, to say the least. Then, DeLuca had to confirm for the panel that Meredith was part of a crew of coworkers who essentially bullied him in the past, following his and Karev's brutal physical altercation. Meredith could forgive her boyfriend's adherence to the law, of course, but it didn't stop her from blurting to DeLuca during a recess that, if she was to lose her license but he could still practice, they'd never make it.

In the end, however, Meredith didn't end up losing her license, of course. She apologized to DeLuca, claiming she didn't mean what she said about their relationship not surviving a less favorable hearing outcome. Had the damage already been done though? DeLuca admitted to Meredith that seeing the way she spoke about Derek during the hearing made him realize that she'll never respect him the way she did her late husband or see him as a professional equal. He, perhaps wisely, didn't use the term "on a break," but DeLuca did tell Meredith to take some time to figure out what she wants.

With 350 episodes officially in the can, Grey's love letter to Meredith officially ushered in a new (albeit familiar) chapter for the surgeon. After giving Bailey a "big fat yes" on her job offer, she'll officially scrub back in at Grey Sloan very soon.