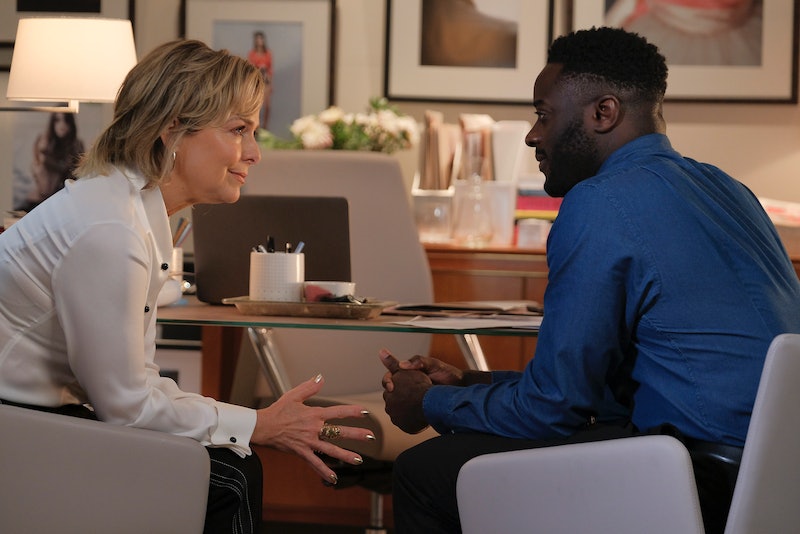 Spoilers ahead for The Bold Type Season 3, Episode 3. The Bold Type may be about women in the workplace, but the April 23 episode is a must-see for men. It centers around Alex, one of the few straight, male reporters on Scarlet's staff, who discovers a woman who wrote a viral story about an overly aggressive date based it on her experience with him. Initially, it comes as a shock to Alex, who's been portrayed as a nice, genuine guy, and who felt their hook up was completely consensual. But after some introspection, he realizes he may not be as aware about the subtle power dynamics that can affect consent as he thought he was, and decides to publish an article outing himself as the subject and detailing this self-realization. It's in this way that Alex, and The Bold Type as a whole, help to create a dialogue about the murkier aspects of consent.

Alex considered Kristen, the short story's author, to be a friend. She didn't necessarily feel the same way. She explained that, during the incident at hand, she felt pressured into letting him come home with her. She said that he didn't pick up on her cues (like saying she was tired and wanted to go to sleep) to notice that she wasn't interested in sex. "It was consensual," Alex argued. "I didn't say it wasn't," Kristen replied. "And fun," Alex added. Kristen grimaced. She didn't have fun. She felt pressured. Add in the fact that Alex, an established writer, had offered to read Kristen's clips, and there was a power imbalance as well — since Kristen was still up-and-coming. "In the moment, I was worried that was conditional," she said of his offer to read her writing.

At first, Alex was dismissive. "I resent the implication of that," he told Kirsten. But when he spoke to Sutton later, she explained that the onus shouldn't and can't be on women alone to say no to something they feel uncomfortable about, as there are any number of reasons they may not want to speak up. Namely, that they may feel unsafe in the situation and concerned about how the man could retaliate if rejected, whether that means professional fallout, or something more physical and dangerous.

As Alex reflected on the night, he came to the realization that he was sorry "for pressuring [Kristen] and putting it on her to say no." He realized that as one half of the hookup, it was just as much on him to read her emotions and expressions and listen to her words to ensure she was really interested in going further with him before doing so. That's why true consent is "yes means yes." The absence of a "no" doesn't give you the green light to go ahead.

The viral short story element of the episode was indicative of short stories like The New Yorker's "Cat Person," which depicts a similar encounter of a bad night in bed for a woman whose partner likely didn't notice at all that anything was amiss. That is the issue with encounters like this — so often men either don't see a problem, or dismiss it as merely a "bad" hookup. Alex put it well when he said in the episode, "That whole night was so routine to me yet so jarring for her."

Alex's experience is a great example of no, not necessarily all men, but yes, all women. "Cat Person" went viral because so many women could identify with having a night like that. If that many women share that experience, an equal number of men have delivered that kind of experience. It could very well be you — even if that wasn't your intention. If whoever you were hooking up with wasn't comfortable, your intention becomes null. Men must look inward to examine their own power and privilege, as well as how those things impact their interactions with sexual partners. And they must also have these conversations with the men around them. It's uncomfortable, but less uncomfortable than it will be for women if men continue those practices without ever examining that, yes, even "good guys" can be a part of the problem.

By the end of the episode, Alex vowed to take this discussion public. In outing himself as the subject of Kristen's story, he asked men to examine their own hook up behavior. Having sex is not a one-sided encounter. Men cannot focus solely on their own pleasure at the expense of checking in with their partners to make sure they're OK. And Alex may have been trying to be nice by offering to read Kristen's clips, but he should have offered to do so in a professional setting — not after a party while in her apartment.

The situations can be nuanced and hard to read, but as Alex demonstrates, that's why it's so critical we talk about them. And The Bold Type is helping to further that discussion.