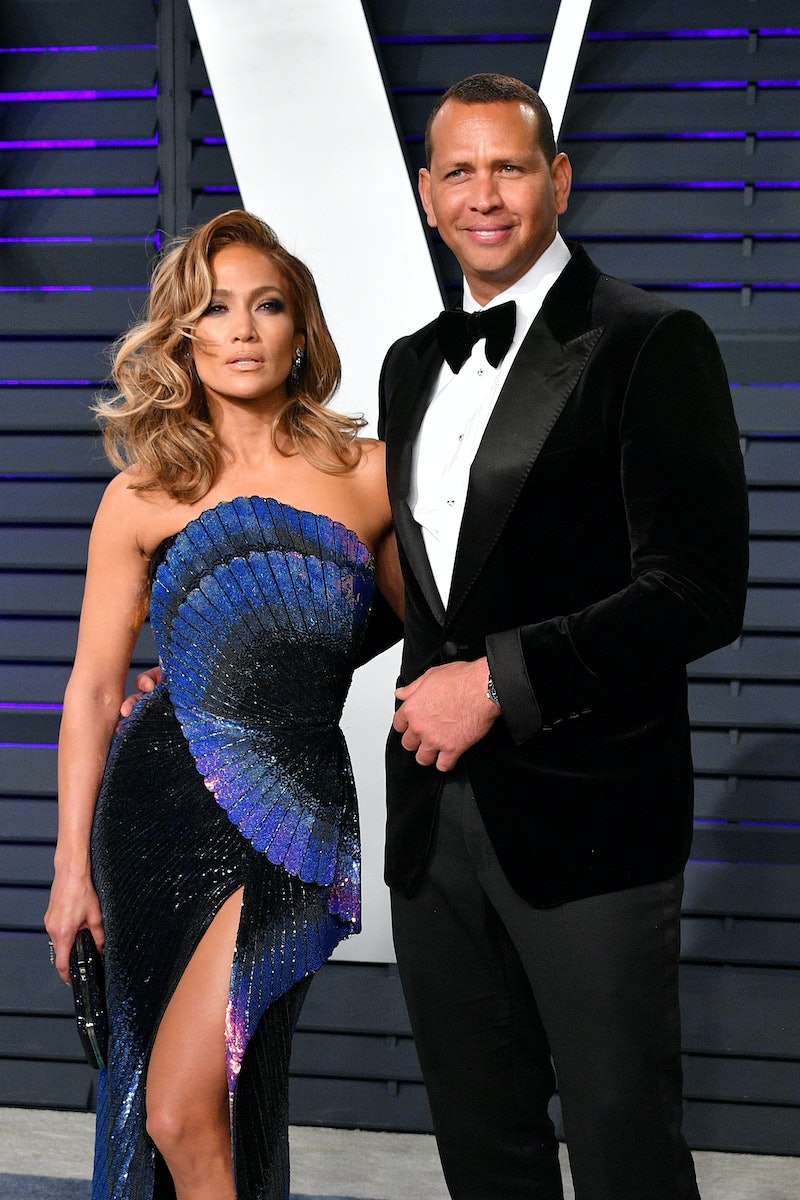 This famous pair knows how important it is to support each other's career goals. On Sunday, Alex Rodriguez wrote Jennifer Lopez a supportive note before she started filming a new movie, and it shows these two are such a power couple. On Instagram, Rodriguez posted a picture with Lopez, where they're cuddled up on a golf course. Lopez will be on the set of Hustlers for the first time this week, and her fiancé teased the project for fans. While the former MLB player made sure not to reveal any details about the film, he praised Lopez's work ethic.

In the post, Rodriguez shared encouraging words for his fiancée, noting the movie will be an acting challenge for her. He wrote:

"This beautiful woman starts shooting her movie tomorrow, 'Hustlers.' I won’t play spoiler, but I can’t wait until you all see how she transforms herself into a completely different character!!"

The post also acknowledged they had spent a nice vacation together and gave a sweet send-off message for the actor before she started filming. "She’s been working so hard lately. I’m glad we were able to enjoy a quick little break before she dives into this new project," A-Rod wrote. "Love you baby and continue to shine, fly high and inspire all of us. @jlo."

Lopez likely appreciated the support from her soon-to-be husband, as Hustlers sounds like an exciting new project. The film will follow a group of former strip club employees, who attempt to rob tens of thousands of dollars from their wealthy Wall Street clients during the financial crisis of 2008, according to the Hollywood Reporter. The movie is an adaptation of the New York Magazine article "Hustlers At Scores," and J. Lo will join all star cast alongside Cardi B, Lili Reinhart, Constance Wu, Keke Palmer, and Julia Stiles.

A-Rod and J. Lo often share major life updates messages on social media. On March 9, Rodriguez and Lopez revealed their engagement on Instagram. The romantic proposal took place while on vacation in the Bahamas, and both stars documented the moment online, according to People. Rodriguez posted a photo popping the question as well, writing, "locking it down #futuremrsrodriguez." The singer posted the photo of the ring on Instagram, captioning the post with a string of hearts.

In the past Rodriguez has shared how much the two lean on and push each other. The two began dating in March of 2017, according to Elle. Weeks before getting engaged, the couple celebrated a two-year anniversary. Rodriguez posted a family photo with Lopez on Instagram, and once again shared a sweet message admiring her professional drive. "Macha, your hard work is unmatched. Your relentless drive and determination push me to be a better man each and every day," he wrote in the caption. "Like you there is none other. Words will never do justice to what the last two years have meant to me."

Lopez and Rodriguez have not yet revealed a wedding date, but it's clear these two are going strong. The couple has built their relationship on supporting each other in their personal and professional lives, and it's clear Rodriguez already rooting for his fiancée as she jumps into upcoming projects.

More like this
At 28, Melanie C Was Falling In Love & Reclaiming Her Confidence
By Olivia-Anne Cleary
9 Movies & TV Shows That Prove Stanley Tucci Elevates Everything He’s In
By Jake Viswanath and Radhika Menon
Everything You Need To Know About The 'Knives Out' Sequel
By Bustle Editors
At 14, Jurnee Smollett Was Taking Meetings With Missy Elliot & Lauryn Hill
By Chloe Foussianes
Get Even More From Bustle — Sign Up For The Newsletter