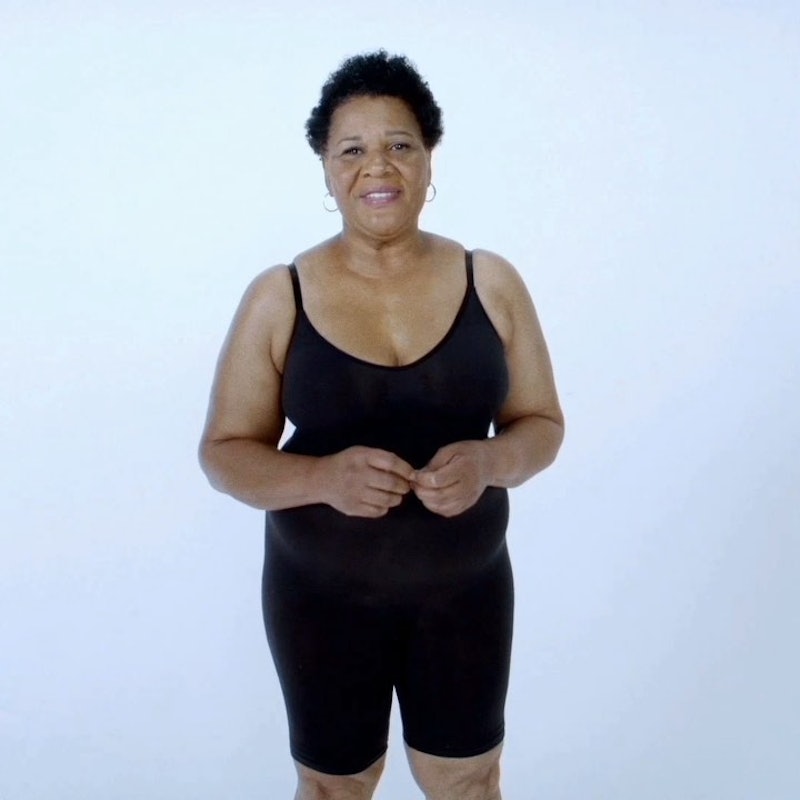 Kim Kardashian announced the re-launch of her shapewear line, Skims, earlier this week, on Aug. 26. The brand, formerly known as Kimono, will launch on Sept. 10 under the new name and is currently rolling out its new marketing material. In the latest campaign, Alice Marie Johnson models Kim Kardashian West's Skims, and tells the story of how she and the entrepreneur and reality star came to be friends.

According to the brand, Kardashian West first heard the story of Alice Marie Johnson back in 2017. At the time, Johnson was serving a life sentence for conspiracy to possess cocaine and attempted possession of cocaine, both nonviolent drug offenses, according to CNN. When Kardashian West saw Johnson's story, the great-grandmother had already served 21 years of her lifetime imprisonment. Kardashian West soon began conversations with senior White House advisor Jared Kushner and ultimately met with President Trump to ask that Johnson be granted a commutation of her sentence. On July 6, 2018, Johnson was granted clemency.

Now, Johnson is telling her story in a campaign for Kardashian West's latest business venture, Skims. In the video posted to the brand's account, Johnson begins by explaining that Kardashian "went to war" for her freedom, and she refers to the reality star as her "war angel." Johnson then moves on to the shapewear itself saying, "This shapewear makes me feel that I can walk into the store, I can pick up something that I used to normally wouldn't even think about wearing, and I can put it on, and it's going to look great on me. This shapewear makes me feel free."

Johnson is the first of several women who will appear in campaigns for Skim. Altogether, Skims will feature 26 other women, including KNC Beauty founder Kristen Noel Crawley, model Roxy Reyes (who also models for Khloe Kardashian's Good American), and influencer Teni Panosian.

The re-launch and new campaigns come after Kardashian originally announced her shapewear line back in June under the name Kimono. Soon after the announcement, criticism began regarding the new line's name allegedly being cultural appropriation as well as Kardashian's attempt to trademark the word "kimono". Following the backlash, the KKW Beauty owner decided to postpone the launch of the brand and rename the shapewear. Now, she has.

According to a post on her personal Instagram account, Kardashain chose the name Skims after asking fans for ideas and falling in love with the concept behind the name. In her caption she wrote, "My fans and followers are a huge inspiration to me – I’m always listening to their feedback and opinions, and am so grateful they shared their ideas for a new brand name...I love the idea that the pieces will be the closest thing to someone’s skin, skimming with amazingly soft and supportive fabrics which accentuate the best parts of our bodies."