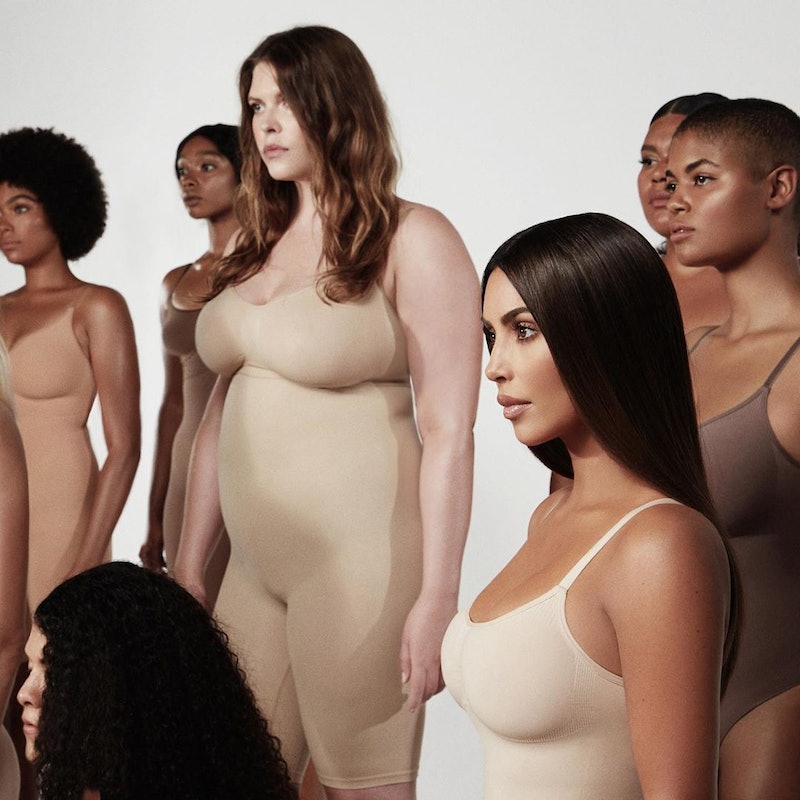 2019 has been a big year for Kim Kardashian West. Not only has she launched multiple KKW Beauty collections, but she also collaborated with her sister Kylie Jenner on perfumes for KKW Fragrance. Now, Kim Kardashian West renamed Kimono to Skims, and that makes for another entrepreneurial endeavor underway for the multiple-business-owning celebrity — even after some setbacks over sensitivity concerns.

In an Instagram post, Kardashian West announced the re-launch of her shapewear line, Kimono. Except it's no longer calledKimono. The name of Kim Kardashian West's shapewear is now Skims Solutionwear. The change comes after the reality star underwent a barrage of criticism over the initial name.

In her post announcing the new moniker, Kardashian West explained Skims writing that the decision was inspired by her fans who were the ones suggesting names to her. She writes in her post, "My fans and followers are a huge inspiration to me – I’m always listening to their feedback and opinions, and am so grateful they shared their ideas for a new brand name. After much thought and consideration, I’m excited to announce the launch of @SKIMS Solutionwear...I love the idea that the pieces will be the closest thing to someone’s skin, skimming with amazingly soft and supportive fabrics which accentuate the best parts of our bodies."

Just in case you don't remember what occurred when Kardashian West initially launched her shapewear range, there was quite a bit of uproar due to its name. Originally meant to be called Kimono, the KKW-helmed brand quickly became the topic of conversation among fans and critics.

Kimono was announced back in June of this year with the KKW Beauty and KKW Fragrance founder explaining that shapewear has been a passion for her for nearly 15 years. In her original Instagram announcement for the brand, she went on to explain that she used to cut-up and customize her shapewear when she couldn't find the right pieces or ones that matched her skin tone. Thus, Kimono (now Skims) was born.

Fast forward a few days, though, and there were allegations of cultural appropriation. While Kardashian West has always been a fan of using her name as a play on words (think about her Kimojis), critics accused the reality star of being insensitive, especially when it came to attempting to trademark the word.

While Kardashian doesn't always respond to the criticism she receives, the shapewear creator listened to her fans and decided to pull the range until she could decide on another name. Now, Skims Solutionwear is here.

If you've been waiting to shop Kim Kardashian West's shapewear line, Kimono has been revamped as Skims and is coming soon. Mark your calendar for Sept. 10 and bookmark the Skims webpage now. With inclusive colors and sizes, Kardashian could have another hit brand on her hands.

More like this
Harry Styles Has Become An Accidental Vinted Model
By El Hunt
Hailey Bieber Went Pantsless In A Hoodie By Justin's Brand Drew House
By Dominique Norman
Spring 2023's Hottest Shoe Trends Include Moto Boots, UGG Minis, & More
By Allie Fasanella
12 Red-Hot Valentine's Day Outfits Perfect For The Holiday Of Love
By Dominique Norman and Kelsey Stiegman
Get Even More From Bustle — Sign Up For The Newsletter
From hair trends to relationship advice, our daily newsletter has everything you need to sound like a person who’s on TikTok, even if you aren’t.