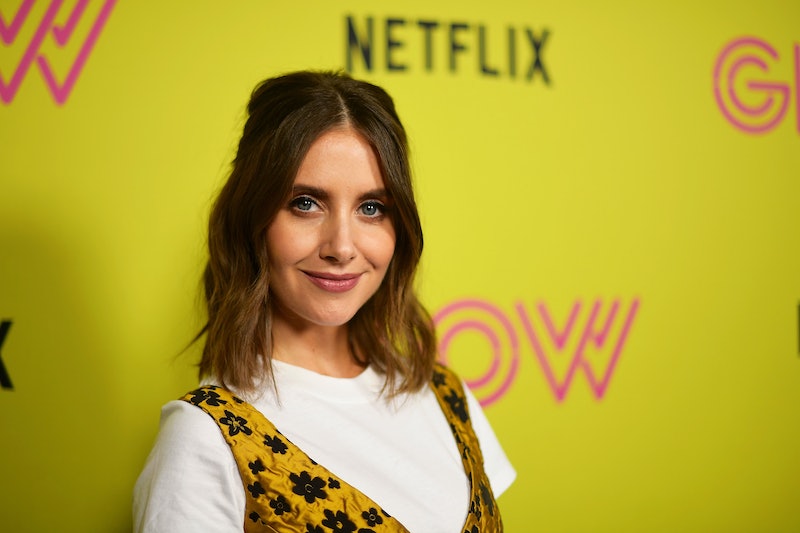 The cannabis compound cannabidiol, AKA CBD, has gotten a lot of play as an all-natch remedy for anxiety. But actor and director Alison Brie's comments on CBD for sore muscles highlights one of the lesser-known benefits of using CBD. Brie, who stars in the Netflix series GLOW, said she began using CBD for muscle soreness long before it became popular.

"I am super into the benefits of CBD," Brie told Lindsay Weinberg for The Hollywood Reporter. "I've been using CBD products for muscle soreness for years, especially since working on GLOW and having an added level of muscle soreness, given all the wrestling and stunt work we do." Like Brie, I also use CBD for sore muscles and chronic pain. And while you likely only recently began hearing about CBD, a 2008 study published in the journal Therapeutics and Clinical Risk Management found that CBD is effective in treating pain.

Another study published in the journal Dialogues in Clinical Neuroscience noted that CBD has been studied as a potential pain management tool since the 1970s. Known clinically as cannabidiol, CBD works by interacting with the endocannabinoid system in the brain to reduce pain signals. People who use CBD on the regular swear by it. In fact, Brie said it's an important part of her health and wellness regimen, and she uses it not only to relieve sore muscles, but to get restful sleep.

CBD can come in many different forms, including sprays, tinctures, edibles, or creams. Brie told The Hollywood Reporter that her go-to is a peppermint hemp extract CBD oil spray from Manitoba Harvest. She likes it so much that she's reportedly partnering with the company to launch its new hemp extract with CBD product line.

Brie said she's shied away from topical CBD oil products because they can sometimes have a strong smell, but CBD creams have come a long way. One of my faves is Sagely Naturals (they even make a CBD roll-on stick for headaches and stress). The creams are non-greasy and they smell like peppermint.

Aside from being relaxing, putting CBD on your skin does indeed have therapeutic benefits. A 2016 study published in the European Journal of Pain found that transdermal CBD reduced inflammation in rats. The study reported that administering CBD topically significantly reduced joint swelling without the unpleasant side effects often associated with prescription medication.

Ready to give it a try? With so many companies selling CBD in so many forms, it can be difficult to make an informed decision about which kind of CBD is right for you. It's also worth noting that CBD, like other supplements, is not regulated, so it can be tough to know where your supplement is coming from, or even how much active ingredient is in your product. Further, research isn't conclusive on how much CBD is necessary for therapeutic effects.

That being said, if you're living with any kind of body pain, and you want to try an all-natch treatment, CBD is worth a look. It's definitely helped me, and it soothes Brie's sore muscles after performing those super-involved wrestling moves. Talk to your doctor about whether CBD might be helpful for you.

More like this
Dyson Is Dropping Futuristic, Air-Purifying Headphones
By Rachel Lapidos
Celine Dion Reveals She’s Been Diagnosed With Stiff Person Syndrome
By Jake Viswanath
Hailey Bieber Has A "Painful" Ovarian Cyst "The Size Of An Apple"
By Radhika Menon
Ashley Benson Revealed The Whole-Body Effects Of Her Anxiety On TikTok
By Stephanie Topacio Long
Get Even More From Bustle — Sign Up For The Newsletter