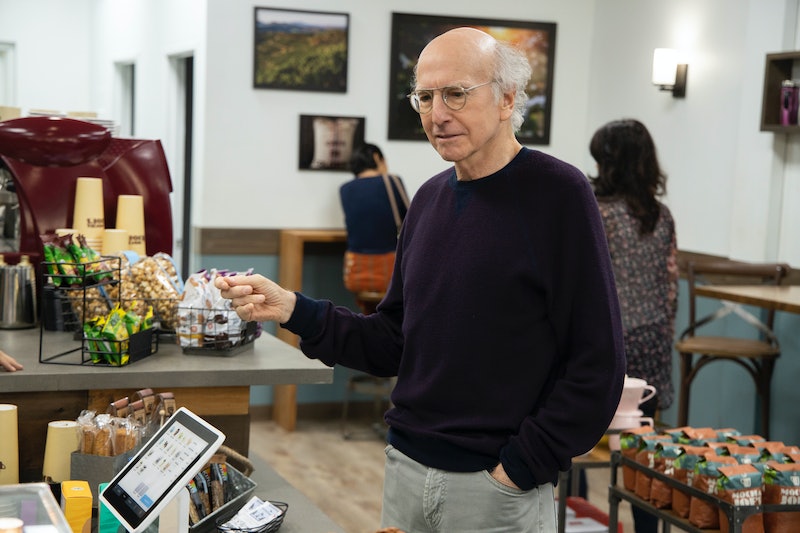 When Curb Your Enthusiasm returned in 2017 after a six-year hiatus, Larry David proved he was still able to draw in big names with Elizabeth Banks, Bryan Cranston, Lauren Graham, Lin-Manuel Miranda, and F. Murray Abraham all appearing. The guest stars of Curb Your Enthusiasm Season 10 are equally as impressive — even if Larry probably won't think too highly of them. Typically, some of the guest actors will play unflattering versions of themselves (for example, Miranda) while others will depict more straightforward fictional characters (i.e. Graham). But whether they're portraying themselves or someone else, Larry pretty much always thinks they're terrible — and they usually aren't too fond of Larry either.

The Season 10 trailer features Jeff Garlin, Susie Essman, Richard Lewis, and J.B. Smoove, so it seems like all the usual suspects will return. Even though Cheryl Hines' Cheryl isn't married to Larry anymore, she'll also be back along with her new boyfriend Ted Danson. However, a character whose absence will be noticeably felt is Marty Funkhouser, as Bob Einstein — who portrayed him — died from cancer in January 2019. Deadline reported that Einstein was originally intended to be in Season 10, but he was too sick to appear. But as much as he’ll be missed, you can still look forward to several big name guest stars.

Larry often irritates people because he himself is irritated with them. That appears to be the case with Fred Armisen. Larry becomes increasingly frustrated when he's stuck behind Armisen's character slowly using a walker in the hallway. So you can expect things to escalate between Larry and the Portlandia star.

Kaitlin Olson has been a part of the Curb family since the classic Season 1 episode "Beloved Aunt." The It's Always Sunny in Philadelphia star portrays Cheryl's sister Becky, who Larry cannot tolerate. She's not so keen on Larry either, and when he visits his former sister-in-law in the hospital in Season 10, it doesn't appear their relationship has improved at all.

Jon Daly played all sorts of obnoxious characters on Kroll Show, like Peter Paparazzo and Wendy Shawn. But all it takes is him being a postal worker who wears shorts for Larry to disrespect him.

Laverne Cox isn't afraid to call Larry out in the Season 10 trailer. The Orange Is the New Black star has shown off her comedy skills before in shows like The Mindy Project, Tuca & Bertie, and A Black Lady Sketch Show ,and she wrote on Instagram that it was "thrill to improvise scenes work the great Larry David!"

How Isla Fisher and Clive Owen are connected in Curb Season 10 isn't yet clear, as only Fisher appeared in the trailer. But here's hoping they'll be spoofing Hollywood power couples. Fisher's real-life husband, Sacha Baron Cohen, would surely approve.

Did Larry somehow convince the great Jenna Maroney to go on a date with him? Whatever reason Larry and Krakowski are so close to one another on a couch, it's guaranteed not to end well with her telling him in the trailer, "Get the f*ck out, Larry."

Richard Kind is great at getting laughs (see: John Mulaney and the Sack Lunch Bunch) and can even lead to some tears (damn you, Bing Bong!), but he mostly just frustrates Larry as Cousin Andy, who returns for the first time since Season 7's "The Black Swan."

Larry gets kicked out of a dinner party, but he's not alone since Jon Hamm — who plays a version of himself — also gets the boot. Larry is delighted to be in the same company as the Mad Men star, but he's almost guaranteed to mess up this budding friendship.

More like this
Nicola Coughlan Just Shared A Major Update About 'Bridgerton' S3
By Sam Ramsden
The 'Kenan & Kel' Reunion On 'SNL' Took A Dramatic Turn, Thanks To Keke Palmer
By Brad Witter
Keke Palmer Just Announced She's "Going To Be A Mom" On 'SNL'
By Brad Witter
You’ll Most Definitely Recognise Kyle Pryor’s Soap Star Girlfriend
By Sophie McEvoy
Get Even More From Bustle — Sign Up For The Newsletter