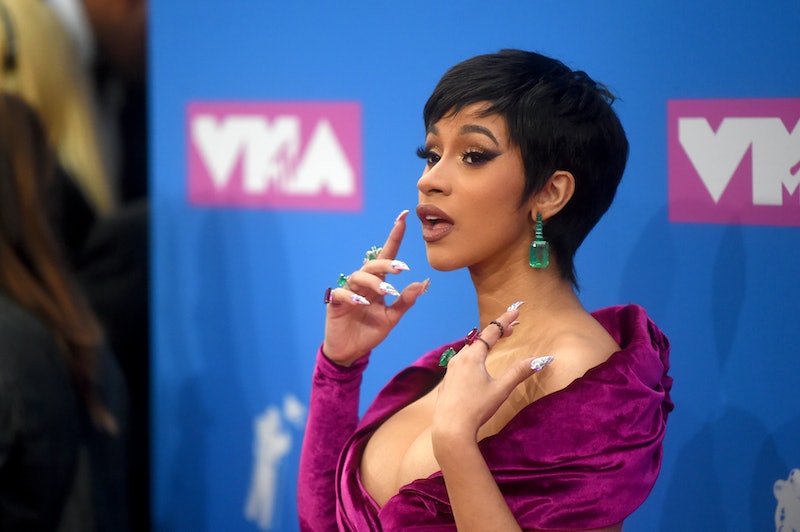 There's no award show quite like the MTV Video Music Awards, especially when it comes to funky, fierce, and freakin' weird fashion. The VMAs are the definitive destination for your fave stars to get quirky with their style choices, dismissing the need for standard red carpet formalwear. Any outfit is fair game at the VMAs, giving us iconic fashion moments like Lil Kim's breast-baring purple jumpsuit, Lady Gaga's meat dress, and too many nearly-naked dresses to count. All of your favorite musically-inclined style stars will be hitting the MTV red carpet this year, and the fashion frenzy leading up to the award show is all but inevitable. Buckle up, because there are so many bona fide #lewks ahead.

Cardi B, Nicki Minaj, and Ariana Grande are all set to perform at the 2018 show, guaranteeing some show-stopping sets and incredible costume changes to boot. With Jennifer Lopez receiving the 2018 Vanguard Award, viewers can count on some big looks to match the big honor. Just maybe don't bank on a white bedazzled bandana and Sean Jean crop top a la 2000. Thankfully, Jenny from the Block tossed out her bedazzler years ago. Viewers might even be blessed with royalty in the form of Beyoncé and Jay-Z during the show, as The Carters are nominated for 8 Moon Person trophies for "APESHIT". The couple's fiercest competition at the ceremony is Cardi B, who is up for a whopping 10 Moon Person trophies, including Best New Artist (yes, somehow Bardi is still considered a "new" artist) and Video Of The Year for her feature on "Finesse" by Bruno Mars. Knowing Cardi's red carpet style, she will probably add a style award to the bunch this awards show.

Take a look at the major fashion moments from the 2018 MTV Video Music Awards red carpet below. Just make sure you are ready to gawk at the unpredictable and rule-breaking styles from all your favorite stars. From the badass to the beautiful to everything outfit in between, the biggest names in music are serving up some major fashion moments at this year's VMAs — and you won't want to miss a single look.

Brendon Urie of Panic! At The Disco