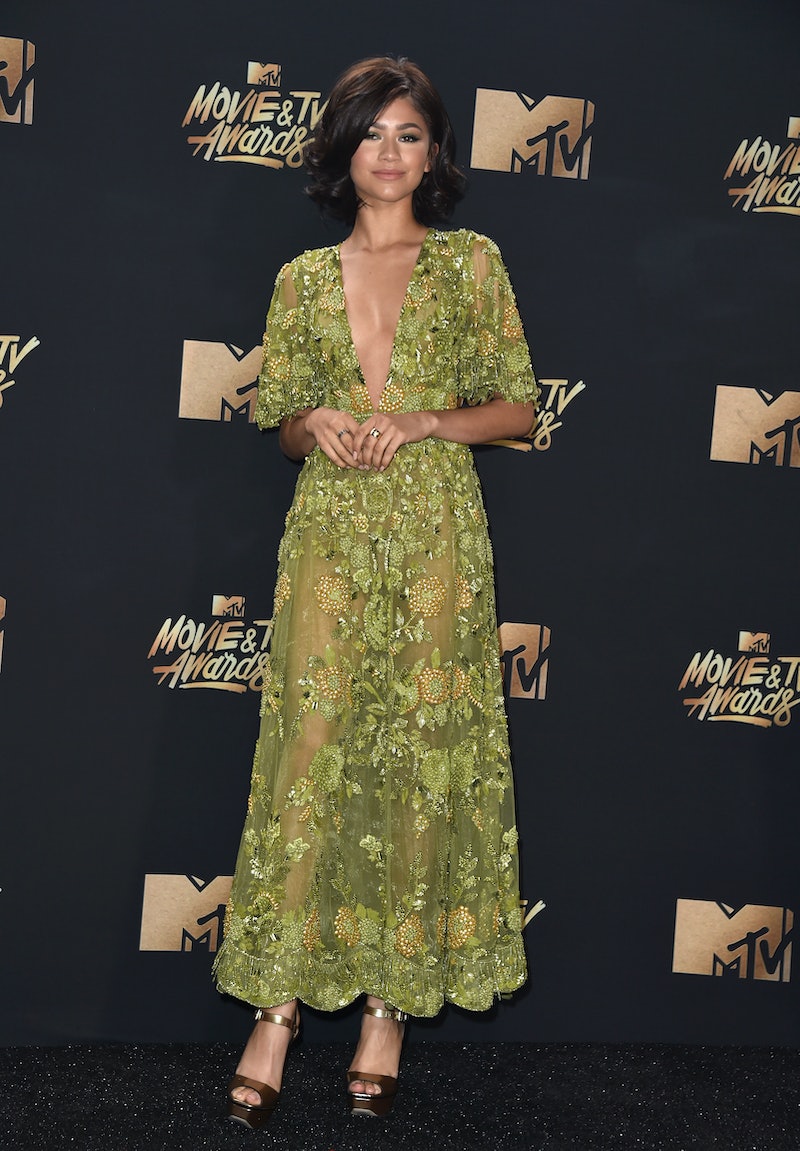 This year's MTV Movie & TV Awards promises to be all sorts of exciting with the addition of TV, new award categories ("Best Fight Against The System," anyone?) and a hilarious host. But what I'm really looking forward to are all the looks from the MTV red carpet.

If you've watched the show over the years, then you already know the red carpet looks run the gamut from colorful and fun to simple and chic. This is no Oscars carpet, with long flowing gowns and sequins and updos. No. This is a fun carpet, where celebs look casual, cool, and sometimes downright quirky.

Take last year's show, for example. Without even planning it (or maybe they planned it?) everyone showed up in one cool all-black look after another. This was, of course, a far cry from previous MTV red carpets. Need I mention the year 2000, which featured a spray tanned Paris Hilton, complete with diamond belly ring? That was about as fabulous and MTV-tastic as it gets.

The show is always a spectacle in the best way, and Sunday night is shaping up to be no different. Several movies and TV shows with incredible casts are up for awards, so we'll hopefully be seeing the likes of Taraji P. Henson, Emma Watson, the cast of Stranger Things, Hailee Steinfeld, and Chrissy Mentz. While there wasn't a red carpet show on TV, there was plenty to see on the live stream. Take a look at all their amazing outfits below. I think you'll agree this night is definitely going down in MTV history.

This has got to be the shiniest, and chicest, dress ever.

Bald is beautiful. And so is Cara in this dress.

Despite the mismatched colors, this dress works.

Shannon Purser, AKA "Barb" from Stranger Things, was unrecognizable in a patterned skater dress and pretty teal eyeliner.

Chrissy looked beautiful on stage in a short (and very shiny) red dress.

Tell me you don't love this lipstick/dress/shoe combo.

Larsson looked great performing on stage in a sparkly bralette.

Bea Miller was super pretty in a pre-show performance.

This dress was as sleek as it gets.

That ruffle is everything.

Love this dress, but truly love those shows.

The actress was bringing some serious JLo vibes.

This dress was super casual, but super cute. And those shoes.

Could she be any cuter?

More like this
Olivia Wilde Wore A Bustier “Revenge Dress” To The 2022 Governors Awards
By Kelsey Stiegman
Sydney Sweeney Just Revived The Iconic ‘90s Cone Bra Trend
By El Hunt
Florence Pugh’s Governors Awards Naked Dress Is Straight Off The Runway
By Sophie McEvoy
The Best Heels For Bunions, According To A Podiatrist
By Margeaux Baulch Klein and Maria Cassano
Get Even More From Bustle — Sign Up For The Newsletter