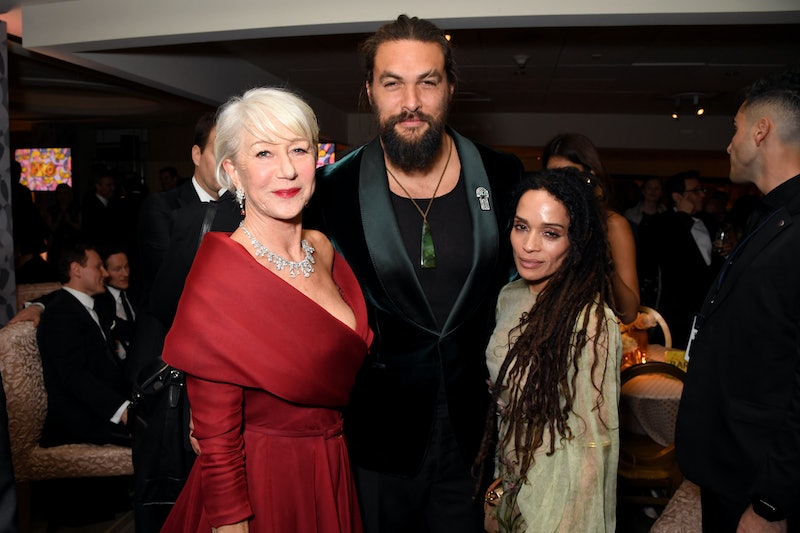 The 2020 Golden Globes Awards have come and gone, but the afterparties kept the celebrations going all night long. After a night of inspiring speeches, and both historic and puzzling wins, seemingly every celebrity in Hollywood hit the town for the afterparties. And these Golden Globes afterparty pics show that's really where it all went down. While the tear-jerking moments during the ceremony are what most people talk about, the post-show soirées that the audience doesn't see are often the most interesting moments of the night.

The celebrations were sentimental, hilarious, and an absolute ruckus all at once. For example, rather than hurrying to hit up the celebrations with all of the stars, Awkwafina took time to FaceTime a very special person to celebrate her victory. Jason Momoa stripped down into his now-iconic tank top, and Patricia Arquette put on a viking hat to dance the night away. (Nobody knows why, but it's brilliant.) Whether they took home a Globe or were simply there to dance the night away, the attendees had a lot to celebrate — and they did so in a grand fashion. Here are the top behind-the-scenes party moments you missed.

Jason Momoa Ate A Burger In A Tank Top

Social media couldn't stop talking about Jason Momoa's tank top last night, and neither could anyone at the after-parties. People were all over the hunky actor as he casually ate a burger at the Warner Bros./InStyle party, and really, who could blame them?

Nobody knows how to pull off a costume change better than J-Lo, who posed with fiancé A-Rod before heading over to the CAA after-party in a white lace get-up than the festive gown she donned at the ceremony.

Awkwafina became the first Asian-American woman to win the award for Best Actress in a Comedy or Musical last night, and shared the historic achievement with one of the most important women in her life: her grandmother, or as some Instagram commenters lovingly called her, Grandmafina.

It's unclear how Taron Egerton ended up in the same room as Rami Malek, Olivia Colman, and Succession's Cousin Greg (Nicholas Braun) after taking home the award for Best Actor in a Comedy or Musical, but let's not question greatness.

Why talk to your friend at the table when you can text hilarious photos to each other? Zoey Deutch did just that with her Politician co-star Ben Platt during the awards show, proving that stars really are just like us.

Tiffany Haddish got on the mic and full-on rapped for the crowd at the Netflix after-party, proving why she needs to perform on every awards show ever.

Although there were many poppin' after-parties, it seems that the Netflix soiree wasn't missed by anyone. Nominees Ana de Armas and Feldstein shared a sweet moment, while Saoirse Ronan caught up with her Lady Bird and Little Women director Greta Gerwig. Even Leonardo DiCaprio couldn't resist the fun.

Even Snoop himself got in on the action, as captured by Yara Shahidi on her Instagram stories. The crowd was dancing to MIMS' "This Is Why I'm Hot," and by the looks of it, he really does know that he's hot.

The cast of The Act had a lot to celebrate, in particular star Patricia Arquette, who took home the award for Best Supporting Actress in a Limited Series, and then got down to Snoop Dogg while wearing a viking hat. May we carry her energy throughout all of 2020.

And, finally, closing out the night, Busy Philipps made sure that Michelle Williams' Golden Globe got home safely.